The popular battle royale initially started out with the working title of 'Fools Gauntlet,' and was conceived by lead game designer Joe Walsh as a 100 player battle royale slalom that asked competitors to duke it out for a share of a 1 million gold prize pool.

While the core idea of getting a bunch of players to navigate a series of complex and hilarious obstacle courses was there from the get-go, the concept was ultimately scaled back from 100 players to 60 so that games would be "readable" and most importantly, fun.

Smitten with Walsh's proposal, Tanton worked with him to put together a pitch deck within 24 hours, and with the help of principal concept artist Dan Hoang even managed to envision how the game might look.

What's striking about that initial concept art is how faithful it is to the final product. According to Tanton, those images also brought about an epiphany. It made them realize that a game like Fall Guys wasn't just about the obstacle courses, but also the plucky competitors who're actually running the gauntlet. 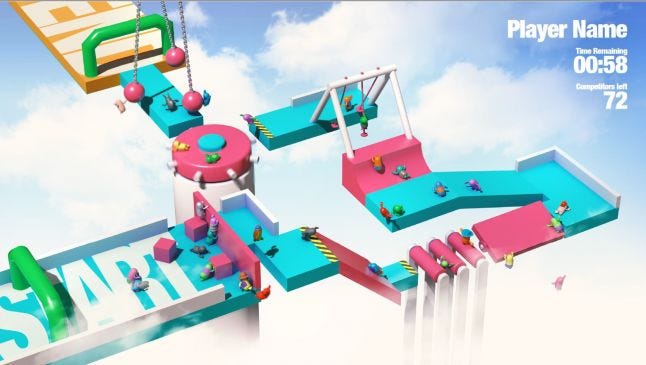 "This image (above) was super important for two reasons. First, all great pitch doc images make you wish you had a controller in your hands. I took one look at this and wanted to play the game," explains Tanton.

"Second, the BEANS. Obviously just little capsule shapes Dan had thrown in but suddenly we realized the focus of this game was the competitors... not just the course"

"That's probably where 'Fall Guys' as a game title first appeared (RIP Fool's Gauntlet and 'Stumble Chums') -- our characters that would fail for our amusement, but crucially always get back up again. Always. They would be heroic in their indefatigability."

Fast forward to August 2020, and there are over 2 million of those bumbling, bouncing, beans running amok on Steam alone, but there were still plenty of challenges to overcome before Mediatonic reached that point. To hear more about those, be sure to check out Tanton's full thread on Twitter.