Big VC windfalls and crowdfunding successes make the headlines, but the majority of developers still fund their work using either their company’s existing warchest or their own personal funds.
Kris Graft
Publisher
January 16, 2015

Big venture capital windfalls and crowdfunding successes make the headlines, but the majority of game developers are still self-reliant when it comes to funding development, according to a recent Game Developers Conference developer survey.

Survey officials polled more than 2,000 North American game developers who attended GDC 2014 to compose the third annual State of the Industry Survey, which seeks to provide a snapshot of the games industry and illustrate industry trends ahead of GDC 2015 in March.

Survey results suggest that, among other trends, console development is on the rise (though PC and mobile still remain the most popular platforms by a wide margin) while digital and microtransaction sales are dominating profits.

However, the majority of those surveyed still fund their work using either their company’s existing warchest or their own personal funds.

Game developers continue to be their own best sources of funding

61 percent of survey respondents said they pay for development using their company’s existing funds, while 32 percent said they reach into their own pocket to cover expenses. 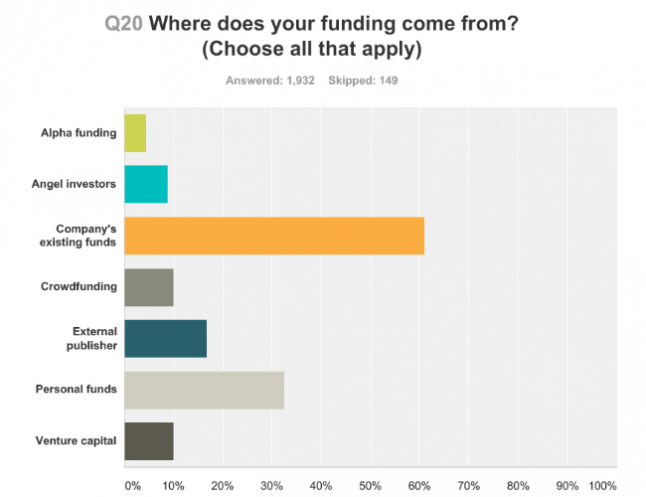 There was a slight year-over-year increase in respondents claiming funds from third-party publishers, too; up to 17 percent of those surveyed as compared to 13 percent a year prior.

The 2015 State of the Industry Survey is the third in an ongoing series of yearly reports that offer insight into the shape of the industry as a prelude to GDC 2015 in San Francisco. Organized by the UBM Tech Game Network, GDC 2015 will take place March 2-6 at the Moscone Convention Center in San Francisco, California.

For more information about the 2015 Game Developers Conference or to register online, visit the GDC website.

Gamasutra and GDC are sibling organizations under parent UBM Tech