SEARCH
A minimum of 3 characters are required to be typed in the search bar in order to perform a search.
Business
9 MIN READ
Developer Insights

Have you ever wondered which game engines are most popular on the world's biggest game platform? Lars Doucet got his hands on data to find out how the game engine race is panning out on Steam.
Lars Doucet, Anthony Pecorella
September 02, 2021

Have you ever wondered which game engines are most popular? Unity seems like it's used the most, but does Unreal dominate in the AAA space? These questions are answerable in principle, but until recently nobody has had good enough data to tell us much. It's even possible the companies themselves don't know precisely.

So I've maintained a site called gamedatacrunch.com for a while that slices & dices publicly available data about games on Steam. We worked with xPaw, the maintainer of steamdb.info to try to discover the underlying game tech behind every game on Steam. Joining the SteamDB data to information we've already gathered on gamedatacrunch.com, we were able to get rough numbers for game engines across a number of factors. So let's dig in and see what fun stuff we found!

To do this we scanned through all the filenames of every game on Steam. We didn't have access to the actual file contents, mind you, so all we could do was make best guesses based on patterns in the filenames themselves. The project is ongoing: here's the Github repository with all the scripts and heuristics.

It's not perfect and it never will be, but comparing what we found to known identification lists and getting feedback from the community, we feel we're already getting pretty okay information. Limitations remain – many game engines give off no detectable signature, and some turn up as false positives for other engines. A few popular engines (most notably Construct, GameMaker, MultiMedia Fusion, Godot, LibGDX and others) are surely undercounted to small or large degree. Nevertheless, we turned up game engine matches for about two-thirds of all ~30,000 Steam games that have at least 1 review (within a reasonably-high confidence level).

And if we made any mistakes, you can tell us about it here.

Unless stated otherwise, we filtered out unreleased games, free games, those that launched with less than a $4.99 price point, and those that have fewer than 50 reviews. This was done to try to reduce noise from small hobby projects unlikely to represent commercial efforts. As for free games, we removed them so we could focus on the premium market alone for this analysis. Finally, we only looked at games launched since 2010.

With these filters in place, the total number of games included in the analysis is a little over 10k. Take these figures as a preliminary first look at the findings of an ongoing project.

Unity is the most popular engine on Steam

Unity is the most popular engine for mobile developers, holding over 50% of that market, and given its reputation in that space we were curious how popular it was for PC games. Turns out, it might be even more dominant on PC.

The race chart below shows the share of games launched by year grouped by engine since 2010. You can see the general rise of modern game engines around 2013, with Unity really dominating starting around 2016.

"Other" means we identified the specific engine but it's really small and we lumped it together with a bunch of smaller ones. "Unknown" means engines we can't identify. Note that all these findings are still quite tentative and we are surely undercounting many things and there may well be some degree of false positives.

While we're at it, let's take a quick look at the contenders.

Here's a quick overview of the engines with at least 50 games that fit our criteria and some top-performers.

Backing up the perception that Unreal is favored for larger-scale projects, we can see that 25% of Unreal games launch at a price point of $29.99+, compared to only about 6% of Unity games. The $49.99+ price point is attempted almost exclusively by games developed on Unreal or with custom engines. Meanwhile, 85% of all other game engines release under the $19.99 price point. 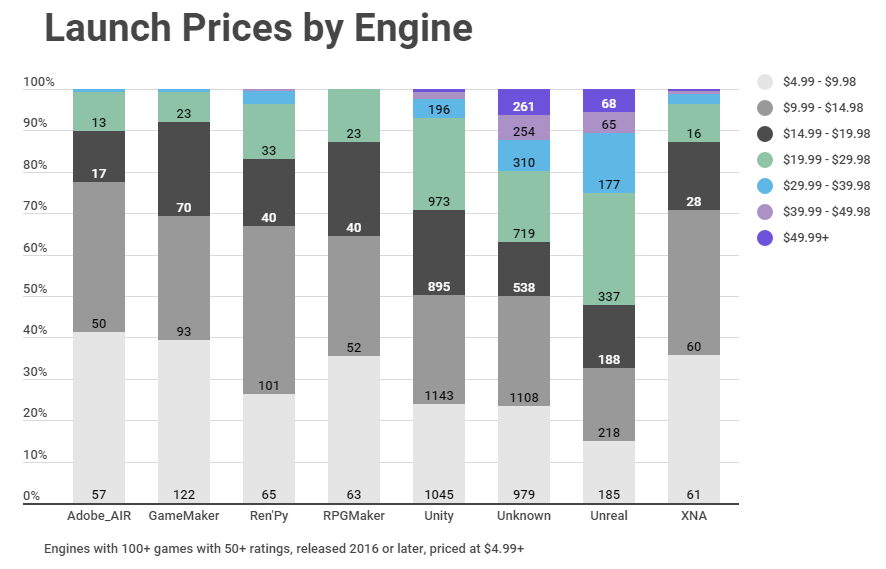 About 30% of games on Steam have Metacritic ratings, but very few of them are RPGMaker (13 games with Metacritic scores) or Ren'Py (7 games). Unity games are also unlikely to get scores relative to other engines, though that's likely more of a volume issue than a genre or engine issue. 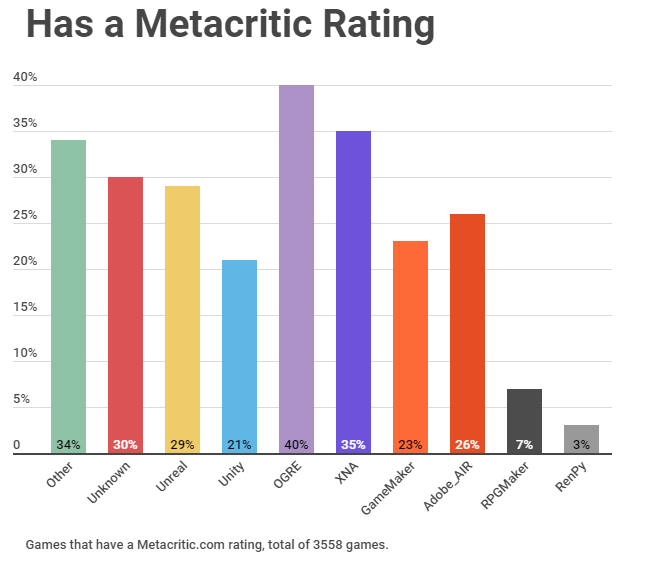 But RPGMaker games have the highest average Metacritic score

While the sample size is certainly lower, RPGMaker games have the highest Metacritic scores. Perhaps surprisingly, Unreal, along with OGRE, sport the lowest average Meacritic scores. 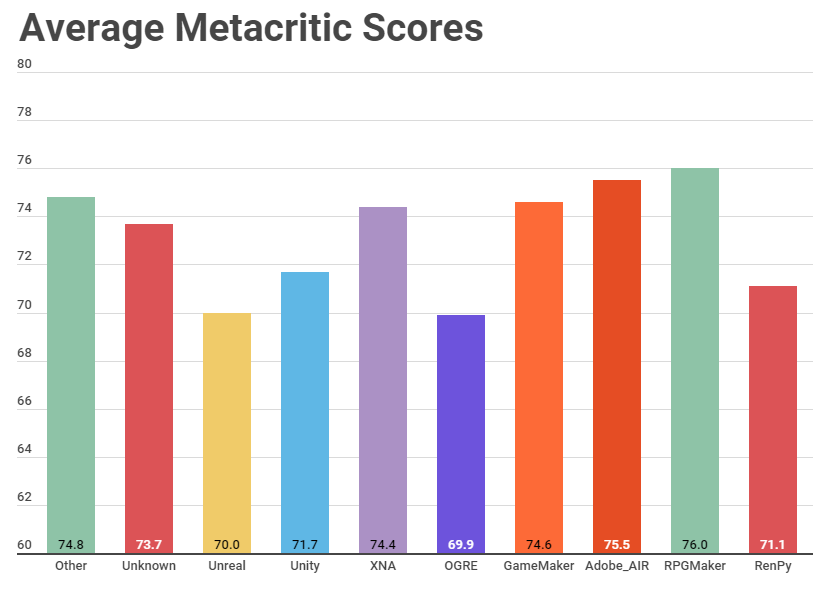 Metacritic scores are controversial for good reason, but it's interesting to see how things break down nonetheless.

Almost no one creates their own engine any more

A pie chart version of the above chart gives us a clearer view of the market share. In 2021 so far, fewer than 20% of games launched have been created with "unknown" engines -- a category that mostly represents custom and in-house engines.

Almost no one, except top-grossing game developers, creates their own engine any more

We can look at Valve's announced top-grossing charts to get a view of what engine use looks like weighted by revenue, and it's a very different picture. While the vast majority of games are developed using one of the major game engines, it turns out that most top-grossing games are using custom engines. We used Steam's own internal "Platinum", "Gold", "Silver", and "Bronze" tiers that they use for end-of-year lists.

Since this is a small list, we included all engines that we could identify. Many of the "other" engines here represent in-house tech like Frostbite, so really the percentage of non-commodity engines is even more pronounced than the graph first implies.

Quick quiz: how many of the 4 Unreal and 2 Unity games that made Platinum can you name? 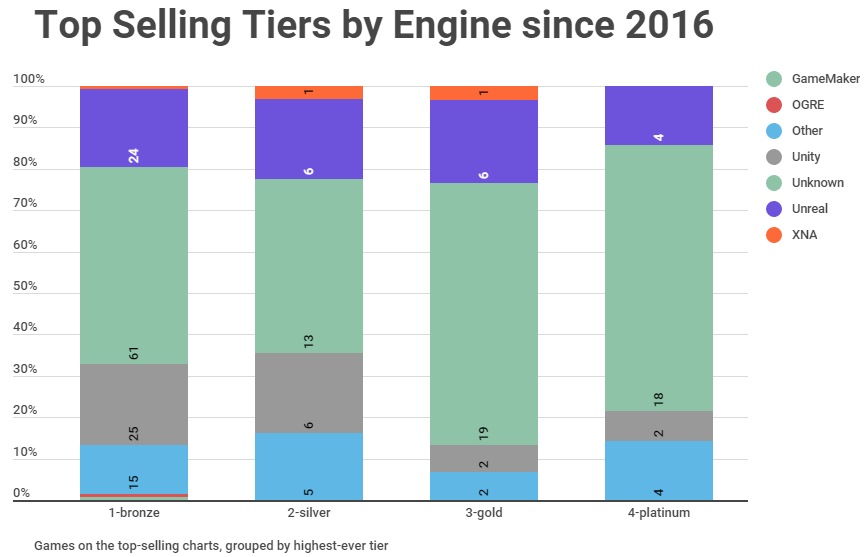 How accurate is the "RPGMaker Tag?" Fairly accurate.

Of all the 1,338 games that Steam users and developers have tagged "RPGMaker", 1107 were identified by our system as truly being "RPGMaker" games, which is a hit rate of about 82%. What were the other 231 game engines that were misidentified? 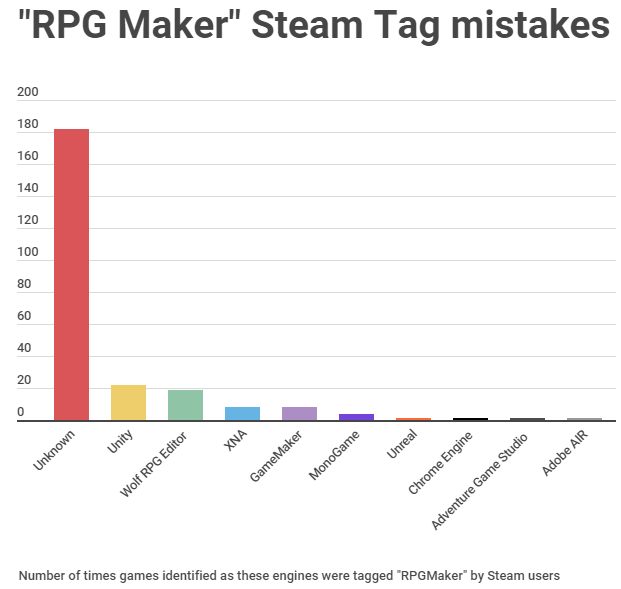 Most of them were "unknown," likely some custom engine. The most popular commodity engines were Unity and something called "Wolf RPG Editor", an engine I first learned about while doing this project. Then a smattering of XNA, GameMaker, and so on.

Our hope is that this data will be used for both productive purposes and also just to explore the data and have fun with it. I would caution everyone to take this data with a grain of salt while we continue to refine the dataset. If you're interested in exploring yourself head on over to Game Data Crunch or SteamDB and check it out, and if you want to help contribute / refine the detection heuristics, please check out our Github page. 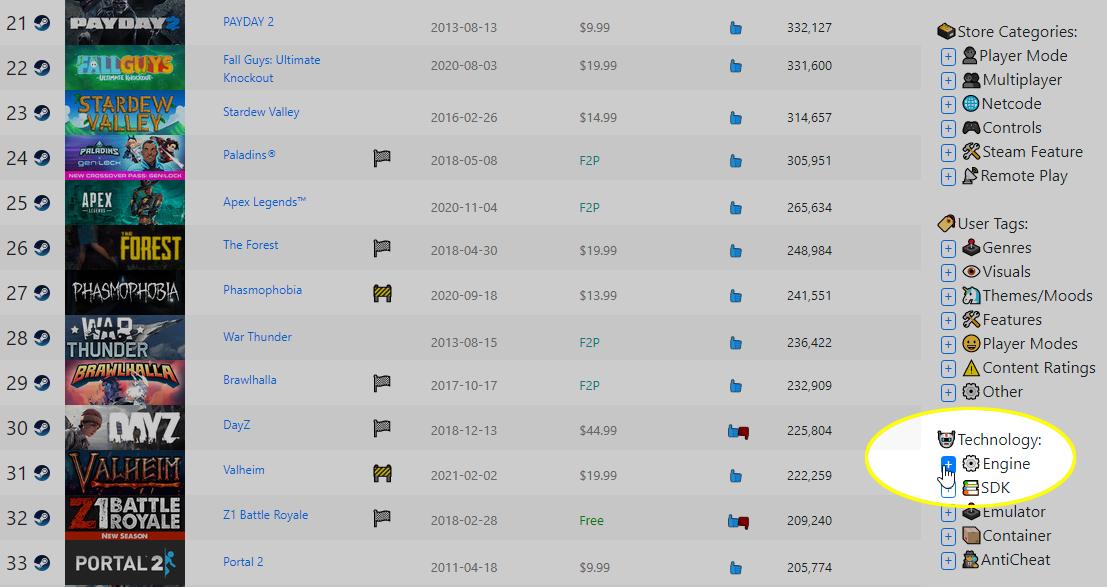