The outspoken Dead or Alive developer talks to Gamasutra about trends in the industry, his relationship with publisher THQ, and what he feels that Japanese developers lack as compared to what they need to succeed on a global scale.
Christian Nutt
Blogger
July 25, 2011

Last year, veteran Tecmo game developer and creator of the Dead or Alive and the relaunched Ninja Gaiden franchises, finally announced his new company, Valhalla Game Studios, after resigning from longtime employer Tecmo in 2008. In 2010, the studio announced that it had signed a contract with THQ to release its first game, a third person action-shooter hybrid called Devil's Third.

Itagaki has long been an outspoken critic of both the works of other developers and the industry at large. Fair enough, because he also seems content to follow his own path rather than worrying about what other developers do. He didn't even seem too interested in worrying about the legacy of the Ninja Gaiden franchise on the NES when he relaunched the series, preferring to go his own route with the IP -- and still meeting with success.

So confident was he that he didn't show his game at E3, and instead simply handed THQ a bizarre video that starred notorious Japanese comedian Hard Gay -- on a visit to the Valhalla Game Studios offices.

Gamasutra got a chance to speak to Itagaki at the show, and queried him about his move to work with a Western publisher, his thoughts on the high profile talent defections from other Japanese publishers, and discussed what his goal is for his game.

A lot has changed since our last interview.

What makes it the best?

TI: Freedom and responsibility. Whatever I say or do, it's all me.

You're representing only yourself?

TI: Yeah. It can't get any more comfortable than this.

TI: Yes, I did have responsibilities before, too. It's just that now there's no politics to deal with.

You made a name for yourself before, but now everything comes back to you directly, right? 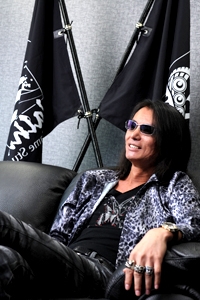 Could you talk about how you got together with THQ?

TI: The head, the guy I'm involved with, is [THQ's EVP of core games] Danny Bilson. As you know, he can make movies, he can write novels, scripts, he can do TV, and he can do games as well, and also he's a businessman as well. He's that kind of guy, so it's really fun to do business with that kind of guy.

You to have talk about money, when you're doing business. That's the business aspect of it. But at the same time, those guys know how to make games, so they also know that it costs money to make good games -- especially good games. So those two aspects are on a direct one-to-one relationship. So I think it's very practical to be that way.

In Japan, management people, they sort of pretend they know what they're doing. Those management people, they say, "I love games," but they don't know how to make them. So the kind of instructions that they would give to the employees would be, "Okay, you've got to make it by when, and it has to be within this budget, and you have to sell whatever many copies." It's the opposite of the practical. It's not practical.

We've been seeing so many of the top Japanese creators flee from Japanese publishers. At this point only Kojima is really at a company. We recently saw Inafune leave Capcom. What do you think of that situation, and why is it happening?

TI: They have their own situations, so I can't really say. Kojima-san's thoughts are Kojima-san's own. Mikami-san, Inafune-san, and a lot of other guys are going independent. Maybe it has to do with the fact that Japanese game development companies have the problems that I described earlier. Maybe they're saying, "Well, I can't deal with this anymore." Those who have confidence in themselves, they can go out and explore their own world.

But I'm not badmouthing the companies that they left. I'm not saying that. I'm just saying that might be what they experienced.

This is an important point I want to add. Mikami-san left Capcom, but he's still on very good terms with the owner of that company. They're friends still.

And I'm also still on good terms with the Tecmo owner, as well, so it's not that we just left. It's just that they tried to stop me as well, but they understood that it had to happen -- well, I wanted to do something. There's always something you want to do, and then you go. That's what happened.

Inafune said the same thing that you said about management, that they just don't understand games.

TI: There tends to be many of those people. I like Capcom's management. Tsujimoto-san is wonderful.

If you look at any Japanese publisher, I think they're the one who have done the best lately in terms of technology, finding an audience globally, that kind of thing.

You talked about how in America you can find people who understand more about games in management positions. Is that what you look for in the company that you want to partner with? Is it a person who you can relate to, speak to? Who understands what you're working on?

TI: First of all, yes. Of course. If that's not the case, who is going to eat it? The gamers. They're the ones who suffer.

Absolutely, and when decisions are made strictly from a business perspective, in a creative medium, you end up with stuff that doesn't push any boundaries.

TI: Right, exactly. In Japan, in this industry, they are lacking not just in technology, but the important thing is the creativity and ingenuity. They're lacking in that. So they complain a lot, they say a lot, but then they don't take action. So before they say anything bad or complain -- "Do something!" is what I want to say. 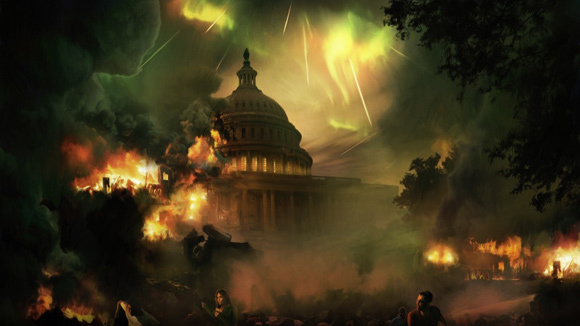 TI: You already know the answer.

Your games always have a real sense of physicality in the way the characters react to each other, and to the enemies. I can see that you want to bring that to Devil's Third in a way that we don't see in these kinds of action games so much.

TI: Of course that's how it's going to be. That's my raison d'être.

To answer your earlier question, yeah, I told you that you already know the answer, right? Well, I will do everything I can to achieve that, okay? And to make the best fighting game, it took a long time to do that, but I think I made it. So to make the best game in this genre now, I might take a long time, but I know I'm going to do it.

So you have a single focus. You know that's your goal. You have one goal that you aim at and that's how you approach game development?

TI: Yes. I'll be the first one to go and attack. We're a military force.

It was interesting when your website popped up and explained your philosophy.

A lot of companies don't share their philosophy with the world but we see more and more of. Interestingly, I think some of the motivated Japanese creators who are, like you, coming into their own space, telling the world "this is what we stand for." Platinum Games did much the same thing recently.

Of course you understand that the current way people look at Japan is to say it's past its prime. You may have the self confidence to say that's irrelevant, but do you think that that motivates people to say, "Look, we're here, and we're fighting hard to prove ourselves in a global space!"?

You know, maybe they don't have humor; they don't know how to joke around. Maybe it's a problem with their manner. So if those people don't have those necessary social skills, and if those people are the ones who are developing the game, no matter how much they try to make globally accepted, globally popular games, that work in different cultures, that might be very difficult.

You have to be able to bring through creative influences, without seeming like you're copying. You have to be original. And I think to do that you have to have a much wider understanding of what's going on.

TI: What you just said -- you're one hundred percent right. You shouldn't make video games by playing video games.

But if you look at what's at E3, a great deal of it is clearly made from watching other video games.

TI: Yes. I think that kind of thing is also needed. It's not like those things are pieces of shit, either, you know? They're fun -- some of them are fun. So I think they're a necessity. Not everyone has to be living on the edge like I am. I think that would be a problem too, if that was the case.

(Laughs) Yeah, maybe. But the people you like to collaborate with, the people that you bring into your studio -- how do you feel about what they have to understand?

TI: Of course, you know like I like powerful people. Really creative people, and those who are confident. But being confident is something that comes internally. It has to come from your past. Something that you know you can do, and you can do it for the future, and you can back it up. That's the kind of thing I'm looking for. And also I like the crazy guys too.