Angry Birds 2 continues to be the company's big earner in its games business, bringing in â‚¬32 million (~$35.6 million) in gross bookings all on its own.
Alissa McAloon
Editor-in-Chief
April 25, 2019

Games gross bookings, a figure Rovio uses to capture in-app purchases and in-app advertising sales,  came in at €65.8 million (~$73.3 million) for the first quarter, a 12.3 percent increase from the €58.6 million (~$65.2 million) reported during the first quarter of the year prior. 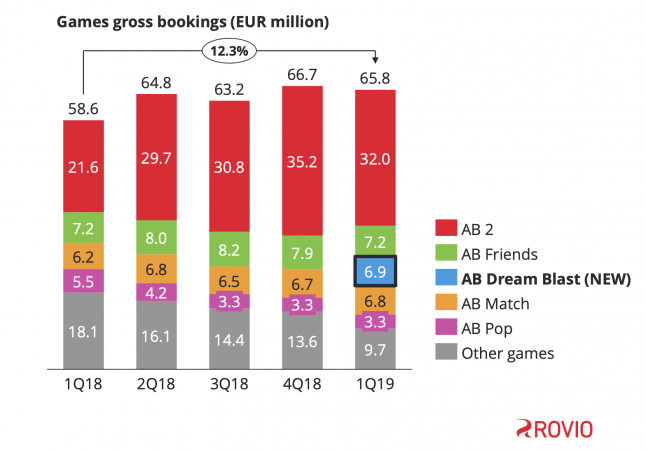 Across its top 5 games (including Angry Birds 2, Friends, Dream Blast, Angry Birds Match, and Angry Birds Pop) Rovio also says it’s been able to maintain stable daily active users and monthly unique players as well. The influx of new players for the January release Angry Birds Dream Blast helped to offset any decline in older titles, thanks in part to the €23.7 million (~$26.4 million) the company spent on user acquisition this quarter.

As a whole, the Rovio group’s revenue increased by 7.8 percent year over year and came in at €70.9 million (~$78.9 million) this quarter. It’s a boost led by the games business, which reported €66.3 million (~$73.8 million) in revenue, as revenue for Rovio’s brand licensing segment fell by just over 50 percent year-over-year to €4.6 million (~$5.1 million) due to low revenue from the Angry Birds Movie.