For Oculus, the future of VR game development lies in your hands

Oculus aims to stand out from the pack by emphasizing "hand presence" -- touch and finger-tracking in VR -- as core to its game design philosophy. Gamasutra chats with CEO Brendan Iribe to learn why.
Alex Wawro
Blogger
August 18, 2015

Most virtual reality game developers I speak to are drawn to VR because it empowers them to make games more immersive, more "real", than any other technology.

Many of them are most excited about the ability to afford players a sense of spatial presence, to make them feel they're really in a game embodying another person (or robot or sentient AI construct or whatever.)

The way that people interact with your game is a critical component in the crafting of that sense of physical presence, which is why it's so intriguing that Oculus VR is making a show of standing by hand tracking, rather than gamepads or wands, as its preferred first-person control scheme for the foreseeable future.

“Your hands are the part of your body you look at the most every day,” Oculus chief Brandon Iribe told me at Gamescom earlier this month.“So when you’re in VR and you’re naturally looking around, when you look down to interact with something you don’t want to see your hands attached to sticks or wands that are waving around in a weird or unnatural way."

You want to see your hands just the way they are...that’s what we want to deliver.”

Iribe was pitching me on “hand presence,” the enhanced feeling of actually inhabiting a virtual reality you may feel when you see your hands accurately modeled in virtual space. Palmer Luckey talked it up quite a bit a few months ago during Oculus’ pre-E3 press conference, when he memorably thrust his hands in the air holding a pair of prototype Oculus Touch controllers.

Sensors embedded in these controllers broadly track the movement of your fingers in an effort to foster what Luckey described as “the sense of feeling as though your virtual hands are actually your real hands,” and after using a pair of the "Half Moon" prototypes as part of Oculus' guided Gamescom demo I have to say it works -- mostly.

During Oculus' Toybox demo my virtual hands seemed to animate in a binary fashion: when you move your real finger past a certain point your virtual hand animates to match, and not before. Still, I was able to point with my index finger and see my corresponding virtual hand do the same; when I raised my thumb up, my VR ghost gave an identical Top Gun salute. It's a neat trick.

But the experience of using Touch right now really isn't that interesting, because (like the rest of the VR industry) it's still being developed. What's interesting is what it says about Oculus, and what it expects from developers for its platform.

Iribe says the Touch controllers are key to where Oculus wants to take the Rift ("We don't believe in the future of wands for VR; we really believe in hands and fingers,") and the company is trying to get the Touch controllers' hand-tracking technology to a point where Rift users can " see their hands just the way they are," right down to tracking the movement of individual joints through real space and replicating them inside the Rift. 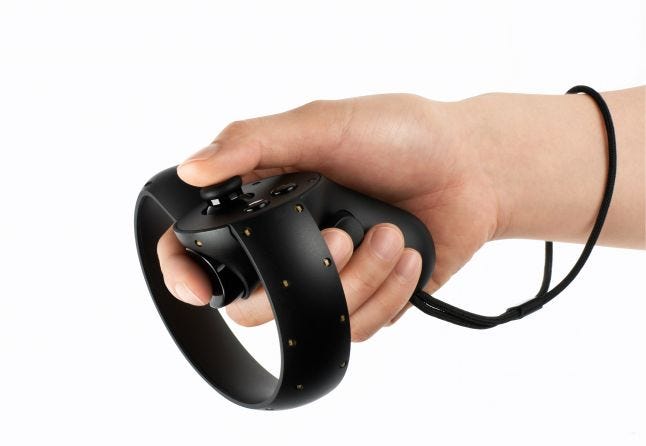 At least, that's the pitch for developers thinking about building games for the Rift. “It's going to get even better as time goes on,” Iribe tells me. “You look at the acquisitions we're making, you look at acquisitions like Pebbles and 3Gear, and we are absolutely on a path to deliver your hands in VR. Your fingers in VR. You're going to move them around, and you're going to see them in VR. That's the path we felt was the right path for VR input.”

I think this is intriguing because it shows Oculus is constructing its own philosophy of VR game design, one that’s branching to focus on experiences best-suited to hand tracking over wands or other motion controllers. That pits the Rift directly against its greatest competitors, Valve and HTC’s Vive system (which has a pair of prototype wand controllers) and Sony’s Project Morpheus headset, which has been prominently demoed in conjunction with either PlayStation 4 gamepads or PlayStation Move controllers.

"I'm very confident you'll see all the other VR systems out there pivot and go in the direction we're going. This is the right path for VR input."

“We did a lot of prototyping with wands and other kinds of controllers, and we just found that, you know, you want to put them down after a while. You don't want to hold them in your hands for too long, they aren't naturally comfortable,” said Iribe. “So in terms of VR input, we've gone in a direction that's fairly different from the other guys. We knew we were going that path internally, but we couldn't talk about it until around E3. So a lot of our motivation for really staying laser-focused on Rift, funding Rift content, and going this direction, was because we knew we were going to go down our own path on input.”

That's another key takeaway for developers: much like Intel, Oculus has demonstrated a willingness to dump money in the coffers of teams who are willing to make VR games tailored for the Rift. Oculus is fully funding the development of about two dozen Rift-exclusive games from studios like Insomniac, High Voltage and Playful, and Iribe says the studios get to own the intellectual property they create; the games just have to debut exclusively on Rift and be built to work well with Oculus Touch.

"The games we're actually going to fund, they're going to be made for Touch...or gamepad," he says, noting that Oculus is funding both Rift-exclusive games pitched to it by external studios, and games it actually took and pitched to external studios. "Oculus Studios is not out to buy exclusivity; they're out to fund full games for the Rift."

Touch will be a "fundamenal differentiator" for the Rift platform

Oculus wants those games to make good use of Touch, but it won't discourage them from supporting alternatives. For all the talk of wands and controllers being tiring and uncomfortable, Iribe says Oculus doesn't intend to abandon controllers entirely in favor of, say, bolting gesture sensors to your face. VR developers appreciate having access to some sort of physical controller, he says, because it affords them a way to deliver haptic feedback and source input from buttons and sticks.

"That's a really big challenge for us: how do you make a natural, ergonomic, form-fitting hand controller that delivers high-quality hand and finger motion tracking, and also buttons and triggers to click, but doesn't get in the way or interfere with your normal interaction with the world?" He asks. "We'll get there. I believe it's going to be one of the fundamental differentiators of the Rift, and I'm very confident you'll see all the other VR systems out there pivot and go in the direction we're going. This is the right path for VR input."

The Oculus CEO is also quick to say that the company doesn't plan to abandon gamepads in favor of selling Touch as its primary game controller; at least, not for the foreseeable future. Iribe made a point of saying Oculus believes Touch is ideal for first-person experiences, and that gamepads are still better-suited for third-person VR games. I’m not sure I agree; with a pair of analog thumbsticks, four face buttons and multiple triggers, a pair of Oculus Touch prototypes seem more than capable of emulating the input options of a modern gamepad.

Iribe admits that most VR games which target gamepads will be compatible with Touch, and hesitated on laying out a window for when to expect the first wave of games developed explicity for Touch controllers.

“You're going to see a lot of Touch content showing up, probably more like middle of next year to late next year,” he told me. “Developers need time to work with it; it takes 6-12-24 months to work with a new input device and build and ship a game for it. These things take time. We believe that, within about 1-2 years, developers will start to master Touch. And then we'll see where we go with that second generation of Rift packages.”