Update:: Facebook will soon begin testing in-headset VR advertisements in a small number of video games, but one game has already bowed out of the test.
Chris Kerr
News Editor
June 17, 2021

Update 6/21/2021: The developers behind Blaston have announced that their game will not be implementing in-game advertisements as previously announced, noting in a tweet that player feedback led them to "realize that Blastion isn't the best fit for this type of advertising test."

The social media company, which owns VR hardware and software maker Oculus, said the first title to take part in the advertising "experiment" will be Resolution Games' virtual reality shooter, Blaston. More titles will then be added to the test in the coming weeks.

Facebook said in-headset adverts could be one way for developers to generate additional revenue, and is part of its long-term plan to ensure Oculus can become a self-sustaining VR platform.

Following its initial test, the company intends to incorporate feedback from developers and users before making in-headset ads more broadly available. It noted that all Oculus ads will follow Facebook's broader advertising principles, which apparently prevent it from selling personal information, and can be tweaked by users at any time.

"It’s important that people can manage the ads they see, so we’re including controls to hide specific ads or hide ads from an advertiser completely," said Facebook. "Users can also access more detailed Ad Preferences from any ad via our 'Why am I seeing this ad?' interface. As our tests progress, we’ll continue listening to feedback to improve the ads people see."

You can see a clear example of an in-headset advert below. For more information on the advertising experiment, check out the Facebook blog. 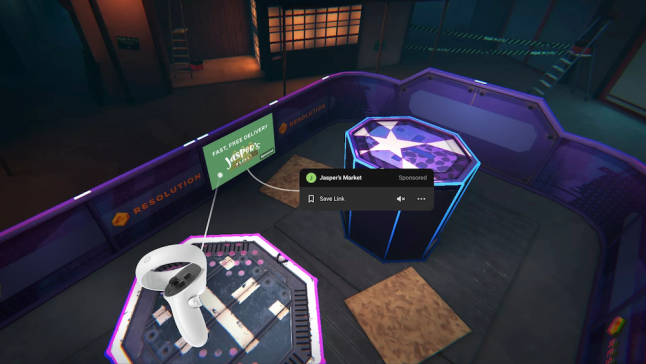