SEARCH
A minimum of 3 characters are required to be typed in the search bar in order to perform a search.
Business
1 MIN READ
News

The growth of Facebook game payment revenue is stalling as users abandon the desktop -- where all game payment revenue is currently generated -- in favor of accessing the service via mobile devices.
Alex Wawro
Contributor
April 23, 2014
Facebook game revenue remained strong through the past quarter, the company said today, though it expects that further growth will be difficult as Facebook users move from accessing the service on desktop -- where all game payment revenue is currently generated -- to accessing it via mobile devices. The company's "total payment and other fees" revenue -- which is made up largely of revenue from Facebook games -- was $237 million for the first quarter of 2014, which ended on March 31. That's just over 10 percent more than the $213 million in payment revenue Facebook reported for the first quarter of last year, but most of that growth didn't come from games. During an earnings call with shareholders today, Facebook's outgoing CFO David Ebersman said that revenue generated specifically by Facebook game payments in the first quarter of 2014 grew just one percent year-over-year. That's significantly less than the 8 percent year-over-year growth in revenue from games that Facebook reported at the end of 2013, and it suggests that growth in payment revenue from Facebook games will continue to slow going forward as more people access Facebook on their tablets and phones. "The shift to mobile is a significant headwind, since our games payments revenue comes from desktop only, where usage is flattened or declining," said Ebersman during today's earnings call. "Growing this [games payment] business going forward will be challenging." Facebook continues to talk up its efforts to transition to mobile in order to adapt to a declining desktop user base, but most of that talk is focused on improving its advertising business, where Facebook makes the lion's share of its money. To that end, the company posted big numbers for the first quarter of 2014, with $1.08 billion in profits and revenue of $2.5 billion. 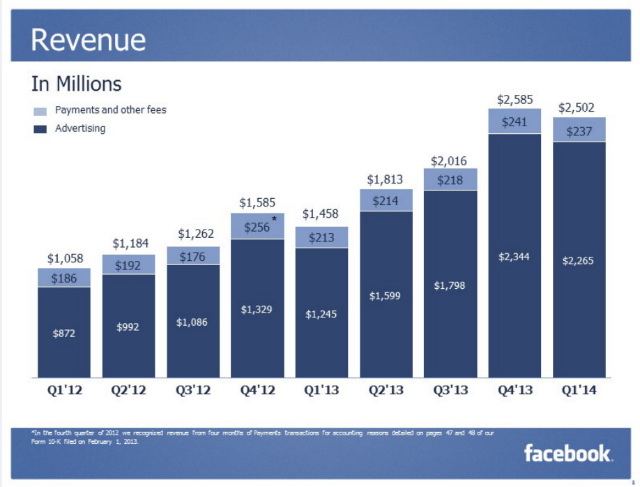