"Players don't always get the knowledge they're looking for, but it's always valuable and steers them in the right direction."
Chris Kerr
News Editor
July 19, 2021

Outer Wilds is a time-bending puzzle box the size of a solar system that can be solved in an interminable number of ways. There's no set path. No wrong answers. Just a series of non-linear riddles and clues that (by hook or crook) culminate in a single inevitable outcome.

As explained by writer and narrative designer Kelsey Beachum at GDC 2021, the strange and wonderful thing about Outer Wilds is its singular hook: the quest for knowledge. There are no high scores to topple or brutal combat techniques to master in Mobius Digital's sprawling sci-fi adventure, meaning players will only become invested if they can be pulled into the mystery that surrounds them.

Outlining how the studio looked to drive players towards the game's core mystery, Beachum explained it was crucial that information was presented in a variety of ways. Although text is used to impart wisdom and lay down breadcrumbs as players rocket from planet to planet (even Outer Wilds' text is presented in non-linear fashion), Beachum stressed the importance of using 'show don't tell' storytelling techniques to create bombastic moments that serve as both unforgettable lessons and narrative hooks.

"Players don't always get the knowledge they're looking for, but it's always valuable and steers them in the right direction," explains Beachum, noting how almost every location in Outer Wilds has some sort of educational payoff.

For instance, Beachum points out how players who venture to Giant's Deep, an ocean world plagued by swirling cyclones, will likely only learn how to effectively navigate that planet once they've been jettisoned into space by a rampaging torrent of wind and water. 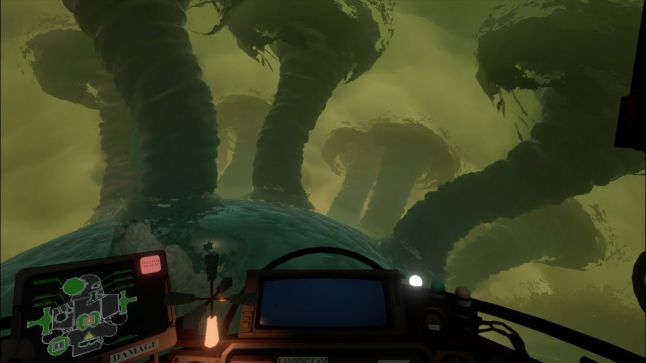 It would've been entirely possible for Beachum to warn players about those cyclones before they set off towards the fraught planet, perhaps by giving an NPC an extra line of text, but in doing so players would have been robbed of a valuable (and undeniably spectacular) moment of enlightenment.

"It's these physical processes and locations that grab players' attention, leading them to investigate further," continues Beachum. "Some of the story is told through found text, but those moments don't deliver the biggest initial hooks. [That text] is meant to be interesting, but it's not going to be as interesting as getting sucked into a cyclone."

As anybody who's played Outer Wilds will know, those 'show don't tell' scenarios -- which also include a deadly cave system that slowly fills with sand and a crumbling planet whose fate is tied to a ravenous singularity -- are some of the most memorable in the game, and deliver gameplay moments worthy of Hollywood while also conveying crucial information.