A discussion with CCP creative director Torfi Frans Olafsson of how the initial ambitions and ideas that lead to the launch of EVE Online in the past have naturally lead to the expansion of the universe to include upcoming shooter Dust 514.
Christian Nutt
Blogger
September 23, 2011

Gamasutra recently spoke to producer Thomas Farrer of Shanghai-based CCP Asia's Dust 514, its PlayStation Network shooter which operates on the same servers as the Reykjavik-based mothership's MMO EVE Online. The two games are fundamentally joined, and players of one game will have a meaningful effect on the players of the other.

But there's another side of that story. Since the shooter hooks so fundamentally into the MMO, a conversation with someone on the MMO side was also important to understand the scale of the company's vision for the shard universe.

To that end, Gamasutra also spoke to Torfi Frans Olafsson, EVE Online's creative director, about these plans. What follows is an interview about how the seeds of these ambitions were planted before the company even began.

"We think the shooter market is ready for this. People want to do this," Olafsson told Gamasutra. To find out why, read on.

I find the link between the two games fascinating because, as far as I'm aware of, nobody's really doing anything like it.

From this point forward, you have to make design decisions in tandem, ultimately.

TFO: Well, some of the things.

Obviously, not for everything.

TFO: Yeah. That's been really exciting. It's been a challenge as well. We have teams working at either office, working on connecting the game and aligning the connection. There's been a lot of flights back and forth to Shanghai. We have really good video conferencing equipment and a lot of meetings and so on.

But in the end, I think we pretty much have the same... We know the design principles of CCP really well, which rely heavily on emergent empowerment of the users, basically trusting the player and being somewhat fearless in your designs, throwing things out and just being ready to react. And not putting people on rails is a huge thing for us. We get hugely annoyed when we're on rails in other games. So, it's going really well. 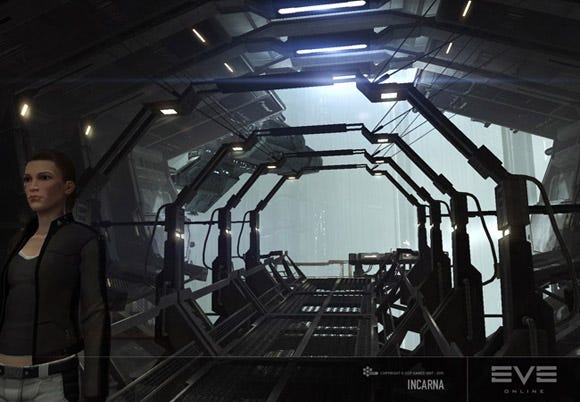 The fact that you can patch EVE as much as you want. That's not something you're going to run into with the PS3. There's going to be cert. So, does that scare you?

TFO: It's a client. We run the server, so while it's difficult to patch the client, it's much easier to make minor adjustments and tweaks to the server. And also if you're simply changing the balancing, that can be done like overnight. That can be done without changing any client code.

That's true. It's just that the console space is a new space, which has a lot of significant differences.

TFO: We just think it's exciting. We think it's great, like it's a challenge, and we're learning something new. But we also brought along a lot of really hardened console veterans onto our team. So it's not all news to us, even though the old CCP, like the original EVE development team, we are learning new things.

It is exciting, because it's something that no one else is really doing. You just turned your game into a shared universe between two games, running two fundamentally different game types in the same universe. That's highly innovative.

TFO: It is really exciting. It goes back to the fact that EVE is single shard. We have always had these discussions, and we've been tempted, but always, "No. One world." If your name is XXX-Death in EVE, than you are that guy in EVE. You're not just on that particular server, that shard in the U.S. region, or whatever. And that has allowed us to see socioeconomic structures which you simply can't see in other games.

Kjartan Pierre Emilsson, our lead designer, our original EVE designer, he's a PhD in chaos physics, and he studied emergence. That was the topic of his dissertation.

And he talks about patterns in nature that only emerge at particular scales. Like vortices, the red dot in Jupiter, you wouldn't see that pattern emerge on a planet the size of Earth. There are just particular patterns that only appear at certain sizes.

The same with communities and sizes. Like towns, they have certain patterns, and cities. And once you start going over 50,000 people or 100,000 people, there are patterns -- just like small towns and cities -- patterns that just could not exist in these small communities.

So, that's what so exciting about EVE. And having this influx of new players through Dust makes it still more exciting.

Something I've gathered across different conversations I've had with different people at CCP, is while you started to lay down the foundations for Dust in 2008, you still could only implement certain things in your game as it reaches these complexity levels or population levels. You have to try to anticipate, or stay ready for, when things can actually emerge from the way the universe works.

TFO: Yeah. The best thing is we can look. We can predict, but we truly don't know. So, we have to keep an incredibly tight relationship with our community. Both watch all the analytics of our server, but also listen to the community and react to both. 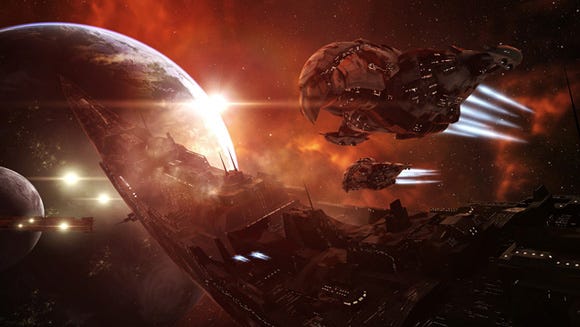 Then you have the CSM, which is a whole other story.

You have a deeply engaged player base who has certain expectations for the game, and you're also going to try to, from my understanding, create that kind of level of engagement in a shooter player base.

It's just ambitious to say you want to create a shooter and get people to care about it as much as they care about EVE.

TFO: Well, I mean, 15 years ago, people wouldn't have told you that somebody would care about as much about EVE as they do about an MMO. Or 20 years ago, before MMOs existed. We think the shooter market is ready for this. People want to do this. They have been assembling in clans, and they've been fighting, but never for a proper purpose -- always for a position on a leaderboard, or some random achievement. But conquering the universe with tens of thousands of other people? That's just mind-numbingly cool, I think.

I can't remember exactly how your mission statement is phrased, but it's something like "creating emotional experiences as valid or even more engaging than your real life."

It's got a lot of interesting implications.

TFO: Well, look at it. I mean, there's a lot of opportunities that we just simply will never experience in real life. That's what games provide, and movies provide for you. We really will never know what it's like to command a starship and destroy a fleet of a thousand people. You don't know. But EVE allows you to experience that.

So, attainment is the ingredient?

TFO: There's a lot of ingredients, I think. I mean, it's investment, attainment. It's collaboration. Most things in EVE... EVE is a multiplayer game. I speak to a lot of people that say, "Oh yeah, I played EVE. It wasn't really fun." "That's okay. Did you play with someone? Were you in a corporation?" "No, I just played alone." "Ah."

That's like being on Facebook alone. Like, having no friends and just taking pictures of yourself. It's not going to last for long. [laughs] The whole chemistry of the game is it's a massively multiplayer game. And you collaborate. 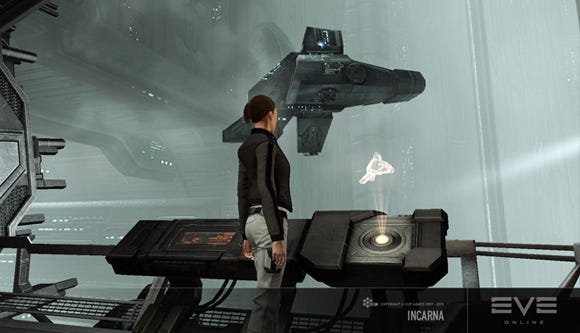 That's an example of something I don't know whether you anticipated it emerging, or if that emerged through scale?

TFO: We did in a way. We are veterans of Ultima Online and MUDs, and original sandbox games. Some of these originals were actually much more true to building worlds, rather than linear experiences of the massively multiplayer games of today. And you can totally see that in these games, some people will focus solely on crafting, or hunting, or preparing, or building something for other players, or catering, or whatever.

So, yeah, we certainly didn't anticipate it, but it's been really exciting. We've seen jobs spring up which we didn't anticipate. Like when we introduced wormholes in Apocrypha, which are these places somewhere in the universe, where you go to a wormhole to somewhere, and you actually don't know where it is. And then the wormhole closes, and you have to scan for a wormhole.

People would get stuck there for days and weeks. While other MMOs would just not allow that mechanic because it's not fun, people thought it was really exciting to be stuck in a wormhole. And companies sprung up, trying to rescue people that were stuck in wormholes. That was a mechanic we couldn't anticipate.

I remember, at one point I met a player who was essentially a trucker.

You know, he hauls cargo for a corporation... That's really interesting.

TFO: Yeah. And it's exciting. It can be really exciting because you often have to pass through really dangerous ideas. There's a lot of gameplay and mechanics in there. Although they don't involve companies. But it also makes it more real... When you buy something deep in zero security space, when you buy some commodity, you know it's been hauled by one of the truckers and manufactured by another player, from all that was actually harvested by another player.

The idea that there's a universe now that can be touched directly by totally different interfaces and different play styles is a big deal, I think.

TFO: Yeah. And we want to do more of it. We would like other avenues for other people to interface with the universe and experience it.