EA reaped $5.5 billion in revenue last year, most of which came from digital dealings

EA credits its live game portfolio for an overall strong year, with COO and CFO Blake Jorgensen saying this latest report "[proves] the value of the live services path we’ve been on."
Alissa McAloon
Editor-in-Chief
May 05, 2020

The majority of this year's $5.5 billion, $4.3 billion to be exact, came from digital sales and transactions. With costs and operating expenses subtracted, that makes for just under $1.5 billion in operating income for the full 12 month period.

The company itself credits its live game portfolio for an overall strong year, with COO and CFO Blake Jorgensen saying this latest report “[proves] the value of the live services path we’ve been on now for a decade” and says that foundation is especially helpful during turbulent times as that expertise gives it “the flexibility we need at times like this to meet player needs.”

A number of those titles hit notable milestones over the past year, including 10 million unique players in the single player Star Wars Jedi: Fallen Order, 25 million unique lifetime players in FIFA 20, and a steady, quarter-by-quarter increase in monthly average players for The Sims 4 throughout the year.

Looking just as the final quarter of the year, the three month period ending March 31, EA reported $1.4 billion in net revenue (up from $1.2 billion during the same period last year) making for around $40 million in operating income for the quarter.

Net bookings however, which is comprised of net revenue minus deferred net revenue for online games and mobile platform fees, declined 11 percent year-over-year to 1.2 billion compared to the 1.4 billion it reported during Q4 last year.

On a quarterly bases, net bookings for both console and PC are actually down year-over-year however (6 percent and 8 percent respectively) while the full year saw an increase in both categories but a 10 percent decrease in mobile net bookings. All of this and more is outlined in the chart just below. 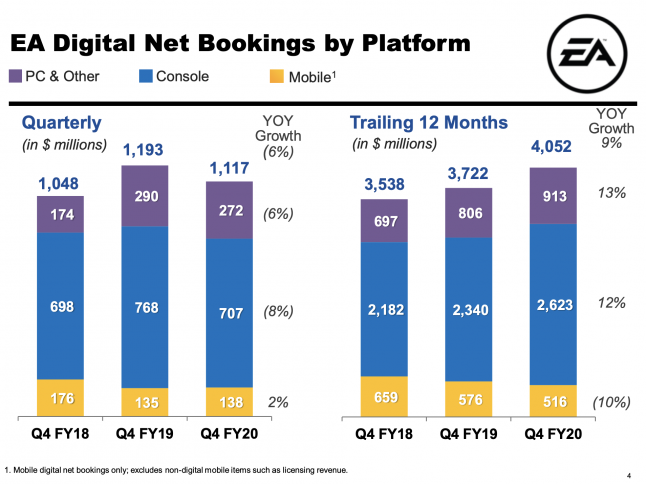