Dispelling some myths about the autistic wunderkind programmer

"One of the misconceptions is that everyone with autism is smart," says Gary Moore of the Nonpareil Institute. "In truth, they’re just like any other cross-section of the population."
Alex Wawro
Blogger
July 06, 2016

In April 2016 Alex St. John, one of the developers behind Microsoft's DirectX technology platform, wrote an article in which he defended eighty hour working weeks, scorned work-life balance and memorably described a porcelain toilet as an "incredibly decadent luxury." St. John’s article was widely criticized for promoting what many consider to be exploitative working practices and attitudes in the video game industry.

In the ensuing outrage, a PowerPoint presentation written by St. John surfaced which included a slide in which he referred to engineers with Asperger syndrome as being "the holy grail" of hires. "They work like machines," he wrote, "don’t engage in politics, don’t develop attitudes and never change jobs."

The fallacy of the 'Rain Man' coders

The idea that people with some form of Autism Spectrum Disorder make for ideal programmers is familiar in fiction. Lisbeth Salander, the autistic protagonist of Stieg Larsson’s The Girl with the Dragon Tattoo is highly introverted and struggles to make friends, but is also a vastly talented hacker. Elliot Alderson, the wunderkind hacker protagonist of Mr Robot (which won the Golden Globe Award for Best Television Series this year) is also on the spectrum. 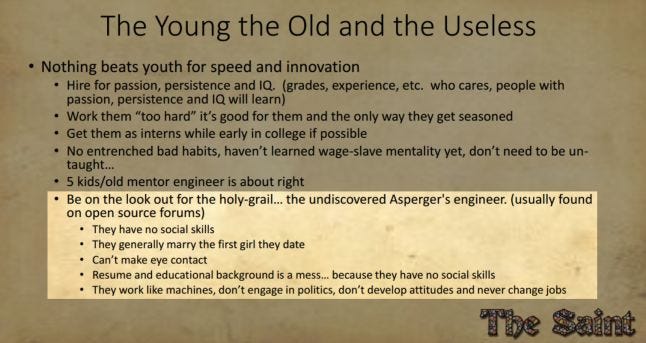 "Be on the lookout for the holy grail...the undiscovered Asperger's engineer."
From Alex St. John's infamous PowerPoint.

"I think all tech people are slightly autistic," Douglas Coupland wrote in his novel Microserfs. The cliché persists beyond fiction. Kathryn Stewart, director of the Orion Academy, a high school for children with high-functioning autism in Moraga, California, once described Asperger’s syndrome as "the engineers' disorder." In 2011 Wikileaks founder Julian Assange told a newspaper reporter: "I am – like all hackers – a little bit autistic."

The stereotype has been fully embraced by many software companies. In April Microsoft launched The Microsoft Autism Hiring Program with a goal of hiring people with autism for full-time positions. More than 700 applicants sent in resumes and, to date, the company has hired 11 candidates, and is now expanding the program to the UK. Many believe autism to be in Microsoft’s DNA. Its founder, Bill Gates, is routinely diagnosed in the press thanks to autistic-seeming quirks: a focus on minutiae, rocking motion and flat tone of voice in interviews. The stereotype of the genius programmer is pervasive. But is it accurate?

"Autism is seen like some sort of mental superpower where we can see math in the air. In my experience, this isn’t really the case."

"It is a fallacy," says Gary Moore, one of the founders of the Nonpareil Institute, a college-cum-software company in Texas for young adults who are on the spectrum. "One of the misconceptions is that everyone with autism is smart. In truth, they’re just like any other cross-section of the population. They’re not all going to be programmers or tech geniuses. Some are able to go to college and get a degree and secure a job at Microsoft. Most are not able to do that."

Moore founded The Nonpareil Institute in 2008 with a friend, Dan Selec. Both men have sons with autism ("He’s not Rain Man. He’s not a genius or a savant. He’s an average IQ kid with severe autism") and wanted to develop a program to help people like their children find a way into employment.

Few, however, have been able to secure long term work at the end of the process, where, according to Moore, there will often be a hundred candidates to every position. "The reality is that most adults with autism are unable to find work," says Moore. "The problem with the tech industry is that, for the most part, companies require a four-year college degree and interview skills."

Beyond the rigors of the application process, for even high functioning autistic people, the strictures of the working environment can present an insurmountable challenge.

"Many struggle working with others, which is a requirement in software development," says Moore. The working conditions of a major game studio can exacerbate these issues, especially those companies that push their employees in the manner described by St John.

"The games industry is extremely grueling," says Moore. "Sixty- to 70-hour work weeks and harsh deadlines. All these things work to the weaknesses of autism. Most are not able to cope." Indeed, while an estimated 1 percent of the world’s population has an autism spectrum disorder, approximately 80 percent of people in this group are currently unemployed.

"The games industry is extremely grueling. Sixty to seventy hour work weeks and harsh deadlines. All these things work to the weaknesses of autism."

23-year old Cody Gillmer is an independent game developer from Longview, Washington. Gillmer was diagnosed with Asperger’s when he was 10 and began developing video games at 16. For Gillmer, the stereotypes, which he considers to be primarily perpetuated by the media, are largely false.

"Autism is seen like some sort of mental superpower where we can see math in the air," he says. "In my experience, this isn’t really the case. Mathematics-heavy programming is something that takes me a while to do."

To date Gillmer has contributed to various open source projects, but is yet to work at a game studio, for many of the reasons that Moore highlights. "I have a major problem tuning out noise, whether that's visual or auditory," he says. "I’ve also got an anxiety disorder of some sort that's probably related. Disagreements stress me out something fierce. It feels like there's something the other person is missing that I just can't get them to see, which hurts in an almost physical way. There's this constant background anxiety. Are they understanding me correctly? Am I making sense? Do they think less of me for talking weird? It just takes its toll."

As a solution to the issue, The Nonpareil Institute has become a software developer in its own right, providing work to those students who complete its programs. Around 30 former students now work at the Institute. The company has four games currently in development.

"We want to build console games that could generate hundreds of millions [dollars] one day," says Moore. "That’s a tall order, of course, so we're starting small and learning and mastering smaller, mobile games. You never know, if we develop a hit we could make enough money to self-sustain."

Despite the confusion and misinformation that surrounds the benefits and challenges of hiring autistic people within video game companies, there are mainstream studios that, like Microsoft, are eager to specifically hire autistic employees. For them, Moore’s advice is clear. "HR departments at game companies often tell us things off-the-record about the challenges of hiring people on the spectrum," says Moore. "Our advice is simple: relax the qualifications. We propose an apprenticeship that doesn’t require a degree. Can the candidate do the work?"

It’s an approach that Microsoft has adapted in its new program. Instead of a sink-or-swim interview, the company runs an interview workshop event that allows candidates to demonstrate their skills. 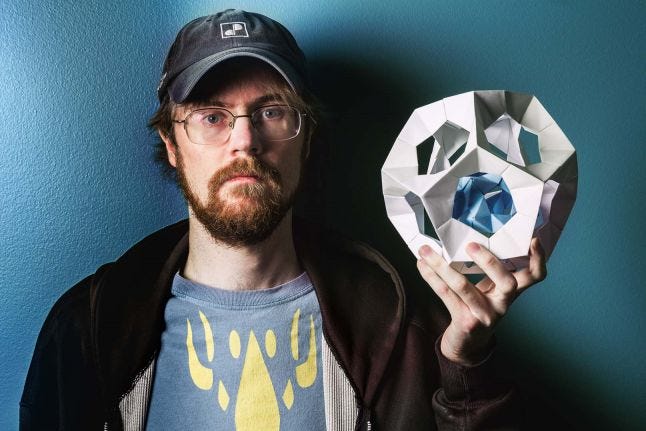 Kyle Schwaneke, an Xbox software development engineer, has been diagnosed
with Asperger's  syndrome. He credits his hiring to Microsoft's unique
interview process for people with Autism Spectrum Disorder.

"It’s crucial to get some education on autism. It takes a lot of patience and understanding of the disorder to avoid things that are not always obvious to an employer"

Despite the books, films and TV series starring wunderkind autistic programmers, there remains, however, a great deal of stigma around autism. "The internet has kind of killed my 'autistic pride,' so to speak," says Gillmer. "The constant use of it as an insult makes me want to hide it, so I tend to not bring it up unless it feels like I'm not communicating properly." For this reason candidates often choose not to disclose their neurological condition.

"Many will not tell their employers," says Moore. "They are embarrassed. As such, it’s crucial to get some education on autism. Hiring autistic people is one challenge, but it takes a lot of patience, understanding of the disorder and knowing how to work with them to avoid behavior issues and things that are not always obvious to an employer."

For Gillmer, the greatest challenge of living with the disorder is the self-doubt and loneliness. "I constantly worry that I'm not making sense. That often kills my desire to reach out to people. It's a big problem for networking, and getting to know others in the industry. As such, I definitely feel like an outsider, or an imposter." Despite the challenges. Gillmer hopes, one day, to open his own studio. He already has a name: Creative³ Games.