In the immediate wake of Oculus debuting its consumer Rift, it seems many developers are more interested in the prototype Oculus Touch motion controller teased by Palmer Luckey at the end of the show.
Alex Wawro
Blogger
June 11, 2015

Oculus VR held its first press conference today to announce a partnership with Microsoft and showcase the upcoming consumer version of its Rift VR headset, but in the immediate wake of the show it seems that many developers are more interested in talking about the prototype Oculus Touch motion controller that company founder Palmer Luckey demonstrated on stage to close the show.

"The Oculus Touch 'Half Moon' control system was the star of the show for me," nDreams CEO Patrick O'Luanaigh tells Gamasutra.

After a lucrative run as a PlayStation Home developer nDreams has become a multi-platform VR development house, and O'Luanaigh believes the Touch's touted haptic feedback and finger tracking capabilities "are fantastic additions which will allow us to do some really interesting things...it's everything that we've wanted from a VR controller."

Darknet developer (and occasional Gamasutra blogger) E McNeill seems to agree, and after attending the event he tells Gamasutra that Luckey's efforts to hype the Oculus Touch motion controller prototype were a high point after the surprising -- and to McNeill, a bit disappointing -- news that every Rift will ship with an Xbox One controller as part of a partnership deal between Microsoft and Oculus.

"VR input was a big question mark for developers, and although it's nice to know that every player will have an Xbox One controller, it felt like a big letdown," says McNeill, painting the announcement of Oculus Touch as the "big twist of the day."

"Oculus Touch doesn't look like what I expected, but that's not a bad thing," says McNeill. "I'll be very curious to try it; I'd love to see how the gesture recognition performs, and since Touch is tracked by the [Rift] camera, I want to know if it will work when the player is facing backwards." 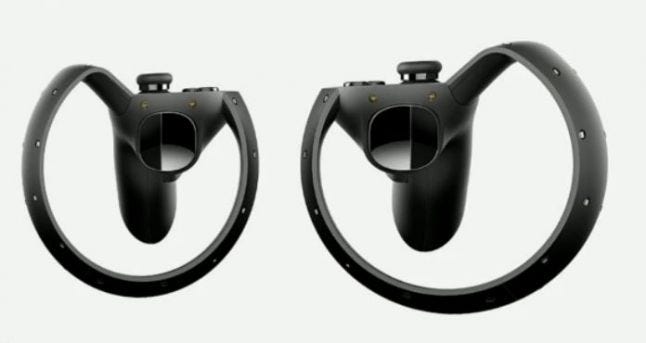 However, a tweet from Luckey suggests that Oculus Touch controllers ("Half Moon" prototype version shown above) will ship in the first quarter of 2016 alongside the Rift, not packaged in with it. "That's bad news for game developers," opines McNeill. "I've been designing games to work with or without motion controls, and it looks like that will continue to be necessary for a while."

Playful Corp. design lead Dan Hurd is currently working on the third-person VR platformer Lucky's Tale (which was prominently featured at today's Oculus event) is also excited about an Oculus-built motion controller, as it may allow more people to intuitively grasp and enjoy VR games.

"The closer we get to truly intuitive input devices like Touch, the more we widen the immediate appeal and increase the accessibility...VR input feels like a challenge every bit as exciting and interesting as our intitial VR dev process was, and I think the implications are no less significant for the game industry as a whole," Hurd tells Gamasutra. "You can read that last sentence as 'We'll have fun throwing stuff at each other's heads for a while and then have to figure out how to make a game with this thing.'"

The developers we spoke to all expressed additional interest in using the Rift to play Xbox One games streamed to a Windows 10 PC, a feature prominently advertised by Xbox chief Phil Spencer during the Oculus briefing. But more than that, they're all extremely curious to learn more about the "$10 million investment fund" Oculus dev relations lead Anna Sweet promised during the event.

"I mentioned earlier how the input change will shake things up, and indie studios are huge players in that space," says Hurd. "So I'm really glad to see a significant level of funding -- $10 million! -- being set aside to mitigate some of the financial burden on these small teams."

An indie VR game developer himself, it's perhaps no surprise that McNeill was also "thrilled to hear that Oculus [is] planning to put $10 million towards developers." However, like Gamasutra, he wonders exactly how that $10 million will be distributed. We've reached out to Oculus for more details on the initiative.

"My overriding feeling is delight that VR is finally here," says O'Luanaigh. "We're seeing final consumer hardware and launch windows. I expect Sony and HTC/Valve to also reveal a lot about their headsets at E3 [next week] -- it's going to be a truly exciting few weeks."