Checking out the PS Vita

A little while ago I was allowed to try out the Vita before its release. Here were my thoughts.
John Sollitto
Blogger
March 08, 2012 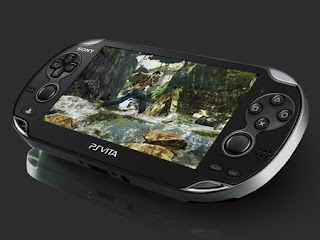 Well, I got to try out the PS Vita this Friday. This was an interesting event for me since this device is already available in its country of origin and reviews and news of its sales have already permeated the web. That being said, I had to approach this review in a very different fashion than I normally would. Knowing that there needed to be some improvements, that it was already a fully operational system (much like the Death Star) and that it had more games slotted for release than the 3DS did, I needed to pay extra close attention.

The setting for the event was nice, the Hill Club in Los Angeles, a pretty swank little place that was completely cleared out except for some real soft couches and chairs and low lighting. Honestly, I’m not sure what the purpose for this was other than hiding the freaking PS Vita from my eyes because the thing is black and it was nearly invisible in the non-existent lighting.

The first thing I tried out was Reality Fighters. Gotta say, it was pretty fun. I mean I never played anything with an “Augment Reality” feature on it (don’t have a 3DS), so I got to mess around with that. The front facing camera for that game is used to take a picture of the player and put their mug on the little virtual fighter, the rear facing cam is used to place your fighters somewhere in your immediate environment for them to duke it out. Or you can just use the stages given to you in the game and totally bypass that whole situation. Regardless of which one you choose, you have to move the camera (and by camera I mean the entire freaking handheld) to keep your fighters in frame if they move around too much.

That was a little irritating to me because it felt like I was holding the console awkwardly and it wasn’t too conducive to playing. The graphics on the game were pretty nice, I’ll give it that, but it felt like I was looking at enlarged HD models from Shogun: Total War 2 that had been put on the bodies of the Street Fighter characters so they could fight. That description basically sums up Reality Fighters for you. It was fun, there were a lot of unlockables, and the story was cute. It’s perfect for playing on a bus or a road-trip or what have you, but it’s just another fighting game. When they have Ultimate Marvel vs. Capcom 3 coming out for the PS Vita, it makes me wonder if Reality Fighters is just to show off the “augment reality” thing. A novelty game if you will.

Next I tried some weird little racing game they had. It honestly looked like a really fancy version of Hydro Thunder (you know, that awesome boat racing game you always played in a movie theater or restaurant?) but without water and more like F-Zero. Similarities aside it was pretty bland but that game was there to demonstrate the Vita’s ability to play on the PlayStation Network with PS3’s on multiplayer. This is a really cool idea to me and if it works? Hooboy. That changes a lot of things for the better. 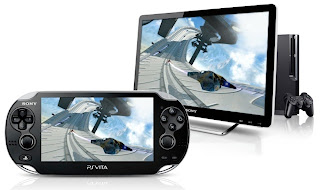 I watched a couple of ladies play competitively, one girl on the Vita and the other on the PS3 there and they said they worked fine in tandem and they weren’t experiencing any problems. Say you’re playing on a bus against someone who is at home playing the same game online and you race together (or play UMvC3 or whatever you wanna say) and you two are having a grand old time. You get the multiplayer experience of just playing with someone online, and I’m fairly certain there’s a voice feature that lets you chat with the other person through your PS Vita too. So that, in my mind, is pretty awesome.

This assumes though that you’re going somewhere or are at an outside location with a good connection to the internet or good wireless signal to keep from lagging, and won’t look like a total basket case while shouting at your PS Vita. You then run the risk of making anyone with a mobile gaming platform look like those wackos who yell at people over their Bluetooths or make people think they’re shouting at them while they ride the bus together (someone please do this because I will pay money to watch that happen).

The other game of note that showed off the Vita’s capabilities was Little Deviants. It was a cool little mini-game extravaganza that made you utilize all of the features on the handheld. Honestly though, my least favorite feature is probably the rear touch pad. I feel like it’s a little pointless. There is a pad on the back of the Vita, the size of the screen on the front, for you to use for…what? Games? Apps? I’m not exactly sure what other purpose it could have other than gaming, but there you go. There seem to be a lot of features on the Vita that are multi-purposed and that one seems to be the only one that has only one job. Maybe I just wasn’t able to try it out enough, but I digress. 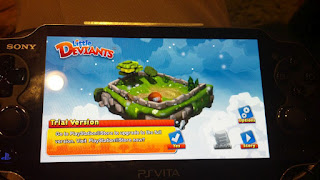 Little Deviants was actually really fun. You got to move the Vita around to roll the little monster dudes across a field, or guide him through caves to search for bombs dropped by funky robots. You used the front touch screen and rear touch pad to play this sort of Whack-a-Mole game where you had to knock robots out of windows with the touch screen/pad depending on which way the robot was facing. The weirdest game was the one where I had to pinch the screen (I had to place my fingers on the front screen and touch pad with my hand over the top of the Vita, like I was picking it up that way) and use that position to slingshot the monster guy across the arena. That got a little cumbersome and clumsy and wasn’t the best game on there.

As a system, the PS Vita is a jack-of-all--trades. It has WiFi multiplayer capability, you can surf the web on it, you can play really good looking games on it that are super fun, but I think it suffers from one fatal flaw. The games on the PS Vita show what the developers think you can do on your journey or wherever you are that is not in front of your PS3. Little Deviants and Reality Fighters depend on you riding on a bus or in a waiting room or outside for a bit and having enough time to play a few matches or a couple of mini games. Uncharted and the many other rpgs that are slotted for launch require lots of concentration and time to play, so you better be on a long ride or someplace where you can really play without someone shouting “PUT THAT DAMN THING DOWN AND GO VISIT WITH YOUR GRANDMOTHER!”

For its price, $250, you’re better off just buying the PS3 and spending some cash on fun games for your smart phone. Don’t have a smart phone or DS or anything like that? Maybe you should just listen to music, read a book or…I dunno, talk to people. I mean, the PS Vita is cool and has a lot of potential but it’s a lot of money to spend on something you may get only an hour, at most, of use out of it before you put it down. How long do you want to spend looking at that small screen? How often are you on a plane, a train, or an automobile for extended amounts of time? What can it do that your smart phone, laptop, or mp3 player can’t? Play games? Do you have to play games every second of every day wherever you go? If you answered “yes,” then the PS Vita is for you and you might like it a whole heck of a lot. If you can live without it, then I guess you save $250 and can use that on something else.