Gamasutra analyst Matt Matthews breaks down March NPD retail data to compare the U.S. launch of the 3DS to previous handheld launches, emphasizing that week-one s
Matt Matthews
Blogger
April 18, 2011
[As part of his most recent analysis, Gamasutra analyst Matt Matthews breaks down March NPD retail data to compare the U.S. launch of the Nintendo 3DS to previous handheld launches, emphasizing that week-one sales "cannot predict" a platform's future.] The latest retail sales estimates released by the NPD Group covered the first seven days on the market for Nintendo's new handheld, the 3DS. The last time the U.S. video game industry observed the launch of new dedicated gaming hardware was in November 2006, when the Sony PlayStation 3 and Nintendo Wii were launched in the weeks prior to Thanksgiving that year. Priced at $250 and sporting an impressive 3D screen that doesn't require special glasses, the new handheld runs both new 3DS software and software designed for the previous generation Nintendo DS/DSi systems. Shortly after U.S. release, Nintendo of America stated the 3DS sold better in its first day than any handheld system in the company's history, but declined to release actual numbers. When the NPD Group released its estimates, which Nintendo cited in a press release, the official one-week figure was just under 400,000 units. In fact, Barclays Capital analyst Mori Haruka sharpened the figure to 398,000. According to NPD Group analyst Anita Frazier, the top-selling 3DS game was Super Street Fighter IV 3D Edition by Capcom. In a follow-up comment to Gamasutra, the NPD Group added that U.S. unit sales for SSF43DE were 100,000 units. Consequently all other games, from Nintendo and third parties, had sales below that level. Commenting on the system's launch, Wedbush Securities analyst Michael Pachter told us that he felt that 3DS software sales were “miserable” with “literally a 1:1 attach rate." That is, each new 3DS owner purchased a single game, on average. We would add that this means that the remaining launch titles – of which we counted 15 – sold fewer than 20,000 units on average. Those are the basic facts of the 3DS launch, from which we will now examine two points. First, we will address how the 3DS launch compares to that of prior handhelds, in particular the Nintendo DS line of systems and Sony's PSP. Then we will address what to expect of the 3DS in the coming months. The original Nintendo DS launched with sales of around 480,000 units during the week of 21 – 27 November 2004. During same month (over four full weeks), Nintendo's previous handheld, the Game Boy Advance, sold well over a million units. It sold fewer than 400,000 units of software giving it a first-week attach rate of less than 1.0. The next system to launch was Sony's PlayStation Portable, arriving on 24 March 2005, with 620,000 units in 10 days according to NPD Group data reported at the time. Reports also stated that 1.1 million units of PSP software were sold, giving the system a launch-window attach rate of approximately 1.8. In that same month the Nintendo DS sold fewer than 150,000 units and had sold fewer than 500,000 units during the first three months of the year. From that time until the launch of the Nintendo 3DS, the only handhelds to be released have been revisions of either the Nintendo DS or Sony PSP. We are in no position to discuss the PSP, since we have no data on how, say, the PSP-2000 sold in its original week. Even so, the revisions to the PSP, with the exception of the PSP Go, have been very modest upgrades to the existing hardware. And the lowly PSP Go appears to have sold so poorly at retail that it would serve little purpose to include it here. The three revisions of the Nintendo DS are worth considering. The launch of the Nintendo DS Lite in June 2006 is the beginning of the system's truly amazing sales trajectory. Even so, in its first week it managed only 226,000 units, according to Nintendo. As we noted at the time, the DSi launched in March 2009 with 58,000 units at its midnight launch and 435,000 systems during its first week. The larger DSi XL sold a more modest 141,000 units during its first week. If we convert all the first-week results above to units per day, we arrive at a diagram like the following. Note that the PSP figure is the only one averaged over 10 days instead of seven. 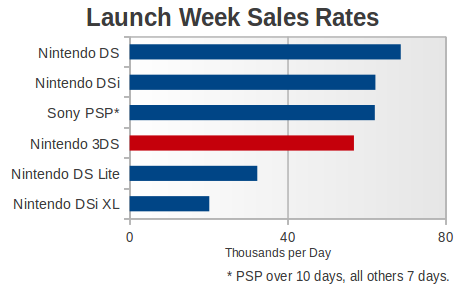 In this context, the Nintendo 3DS launch looks quite reasonable. While it lags somewhat behind the original Nintendo DS, one must remember that the 3DS did not launch during the holiday shopping season and was priced approximately $100 more than the original DS at launch. In our correspondence with the NPD Group, analyst Liam Callahan also pointed to the share of the market claimed by the 3DS. "While the Nintendo DS sold a higher number of hardware units in March than the 3DS, this is not surprising considering historical data. When the Nintendo DS launched in November 2004, the Game Boy Advance sold extremely well, its fourth-best month at the time. However, the 3DS had a higher percentage of portable hardware sales for its launch month compared to the Nintendo DS during its launch month.” Knowing how things turned out for the Nintendo DS and the PSP, the chart above also crystallizes how a single week of sales cannot predict how well a system will sell in the long term. While the original Nintendo DS and PSP both had similar first-week sales rates, the install base for the former is now more than 2.5 times larger than the latter. Moreover, while the PSP sold more software initially and the Nintendo DS had a very low attach rate, the software situation on the PSP degraded quickly about two years after the system's launch and has never recovered. With Pokemon Black/White sales reaching 2.5 million in March 2011, it is manifest that software can still sell very well on the Nintendo DS. Looking over this context, the Nintendo 3DS is off to an average start in terms of hardware but still must demonstrate its potential to sell software. There is no reason for excess alarm, nor celebration, at this time. When more and bigger software titles are released for the 3DS, then we will see how the system stacks up against the competition. Going forward we expect sales in the range of 300,000 to 400,000 per month, as the system's price meets resistance from the average consumer. We are notably more pessimistic than Wedbush's Pachter, who told us that he expects sales in the 400,000 – 500,000 range in April, with sales continuing around that level throughout the year. He also pointed to titles like the remake of The Legend of Zelda: Ocarina of Time as key to pushing the system's sales. As long as Nintendo offers the Nintendo DS line of systems, it may also be giving consumers a cheaper alternative that may hinder uptake of the 3DS. According to NPD Group data provided to us, the line of DS systems currently averages around $156 per system sold. While the monthly average may have been skewed some in March from sales of Pokemon bundles, that $156 figure is consistent with data from previous months. With an average above $150, we believe it suggests that consumers are eager to buy the higher end systems, including many units of the larger DSi XL at $170. Were the Nintendo 3DS priced closer to $200, naturally sales of the 3DS would increase, but likewise we believe we'd see a corresponding decrease in interest in the $150 and $170 Nintendo DS models. We believe that Nintendo will allow the DS to have one last holiday (the system's eighth) and then simultaneously phase it out while dropping the price of the 3DS in early 2012. For the rest of Matthews' in-depth analysis of March's NPD results, read the full Gamasutra feature, available now.
Console
Get daily news, dev blogs, and stories from Game Developer straight to your inbox
Subscribe