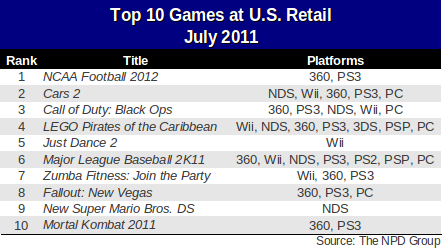 Looking back at 2008 and 2009, one gets a sense of what is missing in 2011: first-party Nintendo games and music games. During July 2008, the top-selling game was NCAA Football 09 on the Xbox 360, but half of the top 10 was dominated by software for Nintendo platforms: Wii Fit, Wii Play, Mario Kart Wii, and Rock Band for the Wii and Guitar Hero: On Tour for the Nintendo DS. (Note that at that time the NPD Group was providing charts that did not combine titles across platforms, as the chart above for July 2011 does. So, for example, if the July 2008 chart were remade in the format used today by the NPD Group, it would combine Rock Band across all platforms and not provide a separate entry for Rock Band for the Wii. In July 2009, NCAA Football 10 for the Xbox 360 wasn't even the top-selling title (again, without combining versions). Rather, Wii Sports Resort ranked first for the month with sales of over 500,000 units. That month six of the top 10 titles were for Nintendo platforms, including Wii Fit, Mario Kart Wii, Mario Kart DS, Pokemon Platinum (DS), and New Super Mario Bros. DS. Other than New Super Mario Bros. DS, which launched more than five years ago in May 2006, not a single Nintendo first-party title broke into the top 10 in July 2011. This isn't to say that Nintendo Wii software isn't selling. In fact, several titles in the top 10 this month are probably there precisely because they sell well on the Wii and the Nintendo DS. That includes licensed titles like Cars 2 and LEGO Pirates of the Caribbean as well as Just Dance 2 -- the current trend in music-based games -- and Zumba Fitness. As we have stated before, we believe that Wii software sales are driven primarily by the enthusiasm of new owners (consumers who have picked up a console within the last six months). We believe this is especially true for Nintendo's first-party titles, and so sales of games like Mario Kart Wii have simply fallen in tandem with Wii hardware sales. The sales of the third-party titles here is possibly the baseline support that the huge installed base of Wii owners can provide, along with some contribution from some new owners. The lack of big new releases in July isn't new, but it did compound the problem this year. Back in 2008 the biggest new title for the month (other than NCAA Football 09) was Soul Calibur IV for the Xbox 360 and PlayStation 3, and combined that title sold fewer than 400,000 units. Other than Wii Sports Resort, no new release made the top 10 in July 2009, and the biggest new release fin July 2010 was Crackdown 2 for the Xbox 360, which sold just over 200,000 units. (If we combine versions as the NPD Group does now, the top new release would have been LEGO Harry Potter: Years 1 -- 4, which sold over 270,000 units combined on the Wii and Nintendo DS. Before moving on, we would like to note at least one bit of good news for EA's NCAA Football franchise. With the end of the PlayStation 2 and PSP as a key platforms, the seminal college football title has moved to just the PlayStation 3 and Xbox 360. (We'll decline to opine upon the aborted All-Play experiment for the Wii.) Despite consolidation on two platforms, NCAA Football 2012 has shown 15% growth in sales over last year. The figure below shows historical data for NCAA Football on the three main platforms. 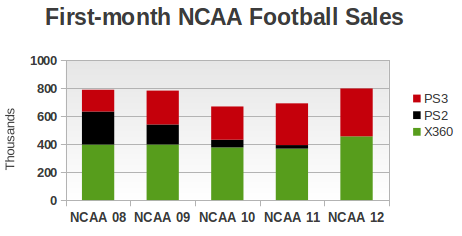 NPD Group analyst Liam Callahan noted that "while unit sales of NCAA Football 12 favored the 360 in absolute numbers, the ratio of PS3 to 360 units was higher than the ratio of the current PS3 install base to the 360 install base." He added that this result was "consistent with NCAA Football 11 which had the same 0.8 ratio of PS3 to 360 unit sales, also higher than the PS3 to 360 install base ratio last July."
Console
Get daily news, dev blogs, and stories from Game Developer straight to your inbox
Subscribe