With an $80 price drop for the Nintendo 3DS now in effect, Gamasutra analyst Matt Matthews takes a look at how the system performed at retail through its last full month at the original $250 price point.
Matt Matthews
Blogger
August 15, 2011
[As part of his monthly analysis of NPD results, Gamasutra analyst Matt Matthews examines how the Nintendo 3DS performed at retail through its last full month at its original $250 price point.] There were only three days left in the NPD Group reporting period when Nintendo announced it would cut the price of the Nintendo 3DS handheld from $250 to $170, effective on 12 August 2011. Consequently, the announcement's effect on July sales was probably negligible and we can look at July sales as entirely the result of the handheld's launch price and software. According to official NPD Group data provided to us, the average selling price (ASP) of the 3DS during the month of July 2011 was $248, confirming that the system was not seeing much in the way of retail discounting through the end of July. Moreover, based on that ASP and the other ASPs for other hardware platforms, comments made by Anita Frazier, and the figures revealed by Microsoft and Nintendo in their respective press releases, we estimate that the Nintendo 3DS sold around 90,000 – 95,000 units during the month. That would mark a 20% decline from June 2011 results, based on average weekly sales, and a 7% decline from the rate in May. The figure below shows the average weekly sales rates for the 3DS since launch. As a result of these figures, the Nintendo 3DS had still not sold a million units in the U.S. by the time Nintendo announced the price cut. (Our estimate puts it somewhere between 915,000 and 940,000 on 30 July 2011.) For comparison, during the first five months of its life, Sony's PlayStation Portable (PSP) sold just over 1.7 million units. The 3DS is now priced the same as the Nintendo DSi XL and only $20 more than the Nintendo DSi, which should make it far more attractive to consumers considering the other Nintendo handhelds. However, price alone won't overcome the lack of 3DS software, and Nintendo knows that. Since the price cut, the company has repeatedly mentioned that a Super Mario 3D Land and Mario Kart 7, both for the 3D handheld, will be available later this year. 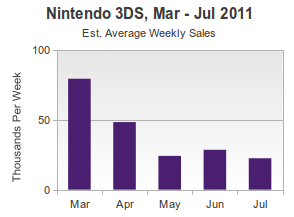 We will see in August's figures, and perhaps more clearly in September's data, just how important that price drop will be, since Nintendo's key new software still won't have arrived. During that period consumers will have a choice of four Nintendo handhelds: the Nintendo DS Lite, the DSi, the DSi XL, and the 3DS. The DS Lite was priced at $100 starting in June 2011, and has been increasingly difficult to find at retailers and online. However, in July the average price of across the three DS models (i.e. not including the 3DS) was $130, according to NPD Group estimates, and that means that a significant number, about 30-40%, of these consumers are opting for the cheapest model. That suggests to us that the surge in sales the Nintendo DS line saw during June and July, from 50,000 units per week in May to over 75,000 units per week, was largely driven by the Nintendo DS Lite price drop. If the DS Lite disappears (and we expect it won't be available much longer) then so will those consumers, and the price of getting a Nintendo handheld will have moved up to $150. As a consequence, Nintendo's current pricing will encourage some potential Nintendo DSi and DSi XL consumers to select the 3DS instead, but that population is limited. When the September numbers arrive in mid-October, we may well be talking about 150,000 – 180,000 units per month for the 3DS. An improvement, surely, but Nintendo certainly wants stronger figures. The market for the Wii is also showing a sharp sensitivity to price, as the effects of the price cut to $150 in mid-May are already appearing to dissipate. Sales shot up to nearly 60,000 units per week during May, but fell back slightly in June and then returned to nearly the same level seen in April, near 45,000 units per week. (See the figure just below.) 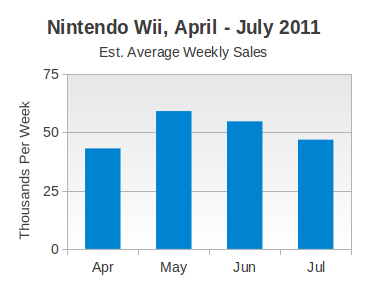 Two months ago we suggested that Wii sales could follow precisely this kind of trajectory, citing the recent PSP price drop as a precedent. Should Wii sales erode further (below, say, 150,000 units per month) it will be interesting to see how, or even if, Nintendo chooses to respond. It is conceivable that consumers waiting for the system be priced less than $200 bought it during one of the many retailer specials (e.g. with a gift card), bought it used, or adopted another system. As a result, the next large group of consumers to which Nintendo could appeal are waiting for a system below $150.
Console
Get daily news, dev blogs, and stories from Game Developer straight to your inbox
Subscribe