Always Be Pitching: How to find and talk to publishers to survive as an indie

Well here I am, talking to publishers again.

I thought that time was over, because as I’ve said before, I believe most publishers aren’t that helpful for indies past the money they provide. I still think this is mostly true. But guess what – that money has to come from somewhere, and these days it sure isn’t coming from selling indie games.

Since money is so tough to come by through direct sales as an independent developer, money from publishers, and the fanbase and access that comes with their influence, can be a big decider of success. Even that slight edge you get from being “a Devolver game” or “an Atlus game” can be a big boon, and help set you up for future success.

On top of that, consoles are important again. Since there are fewer games released on console, you’ve got a better shot at getting a slice of the pie. Unfortunately, some platforms remain gated behind devkits that can be difficult to acquire if you’re not well connected. Publishers often have a lot more sway than your average indie when it comes to getting these kits.

So I’m at it again, pitching to a bunch of publishers simultaneously. And as I do, I figure I should share with you some of the ways that I use speaking with publishers to keep my company afloat, as I see a lot of folks making basic missteps.

The first step is even finding someone to pitch to, which can be tough on its own. Of course you’d like to have Atlus publish your RPG, SNK publish your fighting game, and Sega publish your platform game, but the likelihood is slim, as they have limited capacity, and every other developer is thinking the same dang thing. So unless you get lucky with one of those, you need to look further afield.

New publishers and platforms are cropping up all the time. A few months ago, nobody knew who Dispatch Games was. But now they’ve released one remake of a classic puzzle game (Soldam), and are poised to release another, with one of the most delightful trailers I’ve seen in a while.

You’ve got to be paying attention in order to find these publishers. Of course doing your own leg work is nice, but my main piece of advice here is to check in with fellow struggling indies. If they’re worth their salt, they’re hustling too. They may know of publishers you don’t.

Use any lists or groups you may be a part of. I just got added to a list of alums from the Busan Indie Connect festival in South Korea. The Switch is about to come out in that territory, so the very first thing I did was ask if anyone had a line through to some Korean publishers interested in publishing Switch games. I got three names, and off I went to talk to them. Regional publishers can be really useful in getting you a bit of extra revenue out of a game you’ve already made.

But of course, if you’re asking people for info, share and share alike. Recently a buddy and I were discussing what options there are for funding, and he gave me some suggestions I hadn’t heard of – but was also speculating about who ran a given publisher. Turns out I knew exactly who ran it and had their info. One intro later, that’s another conversation avenue for them.

Others have written longer and better articles on the art of the pitch, so I won’t get too far into the specifics. What I will say is, not to be a jerk, but treat it like you’re making a children’s book. Big photos with one or two big bullet points per page. Easy to understand means easy to pitch. 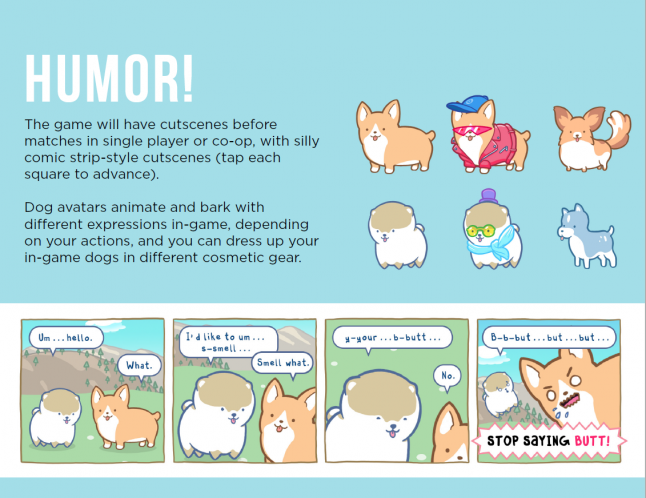 A page from a recent pitch doc

You should pitch as often as you can, in any context you can. If I’m at a trade show, I bring pitch documents and builds with me just in case the opportunity to show my games arises. If I hear of or meet a new publisher or platform holder, I show them the games we’re up to.

This is true for a few reasons. First, most publishers will reject your game. Getting deals is rare, which makes sense if you think about how many games are coming out daily at this point. So you can’t count on pitching to just one perfect publisher – you’ve got to hedge your bet and pitch to anyone you think might be even remotely interested.

Second, publishers, and especially platforms, can change their business plans on a dime. At the end of this year and last year, we had near sure-thing dev contracts lined up that just wound up disappearing because the platform decided not to fund anything at all. It’s not something to get mad about, it’s just one of those things that often happens. Money was allocated to this thing, but a couple corproate decisions later, now no money is allocated to it. That’s just the way of business!

Third, publishers and platforms can take a while to get funding together. We just got a followup from a platform we began discussions with more than a year ago. You can’t count on getting money fast, that is a rarity.

Basically, always say yes, always be available, always have something to show. Pitching and prototyping is a delicate juggling act, but I always count myself as available, because like I said, 95 percent of projects will fall through.

If you wind up with too many projects, well… good for you, jerk!! Send something my way!! But seriously, it’s rare to wind up with two projects accepted simultaneously as an indie, and you can always turn an opportunity down if you’ve signed something else. This is part of why we have so many prototypes and betas.

If you’re always pitching, always talking to folks, you’ve got to check in with the people you’ve sent stuff to. Sometimes people don’t get back to you without a poke!

It’s always good to follow up on information you’ve sent out. Whether it’s a pitch you want feedback on, or a “handshake” deal you’ve agreed to. Don’t pepper your contacts with emails daily, but do check in at reasonable intervals. Not only will you get your information a little faster, your name will be a bit more top-of-mind to the people you’re pitching (which is a good thing as long as you’re not annoying!).

In cases where you’ve “basically” agreed to do something already, it’s good to check in periodically to make sure those things are still happening, especially if you’ve not signed a contract. It may be annoying to do, but that’s how you find things out. Through check-ins in just this past week I’ve learned:

- An invoice I assumed would be paid by X date was in fact planned for 3 months later. I got it sorted, but only because I asked.

- A publisher I hadn’t talked to in many months is now one month away from being able to sign new projects.

- The Korean Switch market will begin as physical releases only.

- A deal I thought was happening isn’t. Better to know sooner than later.

- Three publishers I hadn’t thought of in a while are actively looking for games again.

- A deal I haven’t signed yet is still going ahead as planned, for now.

- A package deal I was going to be part of got sidelined by corporate shuffling at a platform. 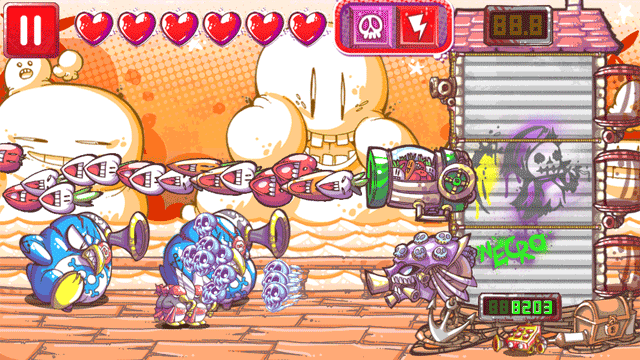 Gunhouse just came out for Switch in the US. We can bring it to other territories because we asked questions!

I give these examples just to show the value of checking in. If I didn’t ask these questions, I would’ve been alternately screwed, or totally in the dark about all these things that are basically vital for my company. Nobody was going to come to me to tell me this stuff. I’ve had friends who just waited on their hands for people and publishers to get back to them, and none of them are running their own studios anymore.

Try to keep your self-imposed deadlines. I sent a few publishers notice that I’d get them a prototype in a week, to gauge their interest. They all wanted to see it – then I took an extra week and a day to deliver. Not great. Set reasonable (and potentially vaguer) goals!

"Say yes to everything that fits your parameters, get that money, and maybe you’ll live to scrape by for another day!!!"

Don’t play publishers off each other.  I’ve heard plenty of discussion about this across various lists, but it just doesn’t work, and it can sour publishers to you. Say I’m talking to Devolver and Adult Swim, and I really want Devolver to publish my game. If I tell them, “you know, Adult Swim is really interested in this, so you should make your decision quickly.” If I’m Devolver, and I’m at all on the fence about your game, or too busy, or there’s any minor roadblock, I’ll think “Oh great! Let Adult Swim do it then, and I don’t have to feel bad turning this down.” So do be transparent that you’re pitching multiple companies, but don’t pretend one company is about to sign you unless they really are.

Figure out who can actually help you, and how. Is this actually enough money to finish your game? Is their revshare deal good? If you finish a game and it sells zero copies, how long can you survive after that? Does this publisher have marketing chops? If not, do they at least have reach? If not to either of those, can they at least pay for a trailer? Will they let you lead the marketing or do you want them to do the lifting? Most publishers won’t be able to do all these things at once, so figure out what’s important to you.

Ask others about the publisher’s reputation. Are they good to work with? Do they pay on time? Are they at all likely of disappearing tomorrow? How friendly is their contract? This is real important stuff to know, and if you can press your network for any of this, you’ll be in a better position.

So: Say yes to everything that fits your parameters, get that money, and maybe you’ll live to scrape by for another day!!!