Monetization is a crucial point in the success of any free-to-play mobile game. Nowadays we have IAPs, Ads, Subscriptions and more exotic means of monetization like product placements.

The most mature title in Social Quantum’s portfolio is Megapolis - a city-building strategy game that became a TOP-10 grossing game worldwide in 2013 according to AppAnnie. Megapolis was first released on mobile devices in 2012 for major app stores (Google Play and Apple’s App Store). It appeared on Amazon, Samsung Galaxy Store and Kakao by the end of 2014. Back then, Megapolis was monetized through IAPs only.

The model is a bit strange in the way that it mixes genres and platforms, but it is nonetheless descriptive. If you look at the left half of the model, where the hyper-casual games are, it becomes evident that the main approach to monetization is In-App Ads. Further to the right are strategy and console games, where the approach is through user payments, which are either In-App Purchases or Subscriptions.

The idea of introducing a hybrid monetization strategy (based on IAP + Ads) to Megapolis appeared in Social Quantum about a year before the publication of this model - market trends are usually clear to all of the large developers far earlier than the articles about these trends are written. However, successfully changing the monetization of a mature title such as Megapolis is no simple task, a task which requires time, thorough analysis, and collaboration between several departments.

The first batch of decisions we had to make was about mediation and a number of advertising networks. At the very basic level, you are faced with a choice of either making an exclusive agreement with one network or creating a competition between several networks for your inventory.

When you go exclusively with one network you do not need mediation at all. In this case, all you need to do is to integrate the ad network’s SDK or connect it through the API. The advantages of the option are simplicity in management and special bonuses from the network.

The advantage of the second option is the potential for revenue growth. You can also lose revenue if you do something wrong. In any case, you will need to decide upon mediation. There are 3 approaches that can be highlighted:

Social Quantum has chosen to develop in-house mediation to facilitate competition between several networks. We see benefits in not only full control over the inventory and the auction but also in transparency and a far greater volume of information than the use of external mediation could provide us with.

Types of ads and placements

The next choice is the choice of the type of ads and the way the player interacts with it. To put it in simplistic terms - banners, videos and offerwalls are what dominate the placement types.
We could, of course, mention playable ads, interstitials and, even native ads. All of these have the right to exist. However, there are a couple of nuances:

It is, of course, possible to invent many names for what you show to a player, but at the core, there are either images/banners and videos (possibly with a certain amount of interactivity) or an offerwall, which is definitely a separate type of placement. Offerwall, usually, is about incentivized traffic as it is heavy with the offers like “download an app and get something in return”.

Megapolis has only rewarded video placements - the type of ads that are initiated by the player and rewarded. There are two hypotheses behind this decision:

The screenshot below shows the first placement in Megapolis. It is a floating bubble with the symbol of the “Megabucks” - an in-game hard currency:

When this bubble is tapped, it expands and the player gets the opportunity to start an interaction with a video ad for a reward:

This placement first appeared in Megapolis in August 2018. The bubble itself is a part of the standard gameplay: bubbles appear above various buildings during core game mechanics, providing information about income that can be gained and other information. Therefore, the UI of the placement is very familiar to the players, and not some new interaction type introduced purely for ad monetization.

“What about retention?” - that is one of the first questions a product team asks when they are faced with the idea of integrating ads within a game. There are those who are wary of ad monetization, those of an opinion that it spoils the User Experience and lowers retention. There are many studies that demonstrate the complete opposite — the retention of players that interact with ads is better.

The chart below displays normalized retention rate for two cohorts: the green cohort watches more than 2 videos per day, while the grey-blue cohort watches less than 2. 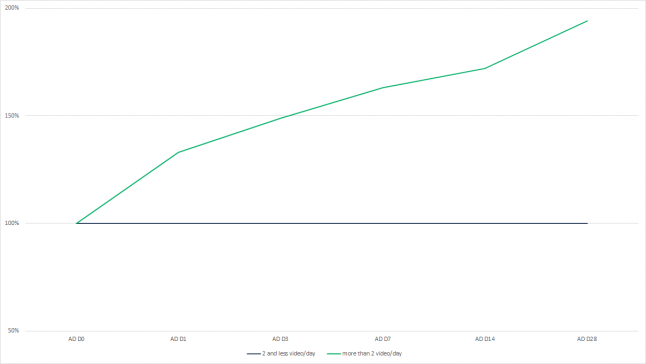 The data was normalized in such a way that the retention curve of the second cohort is always 100%. The days are counted from the moment when an ad mechanic becomes available. To draw this chart we have taken around 3-4 months’ worth of data.
In Megapolis’ case, we can conclude that a player who interacts with more than 2 ads per day stays with the game at Ad Day 28 twice as often as those who do not. Simply put, the retention rate is almost 2 times better.
The second retention chart shows only paying users: 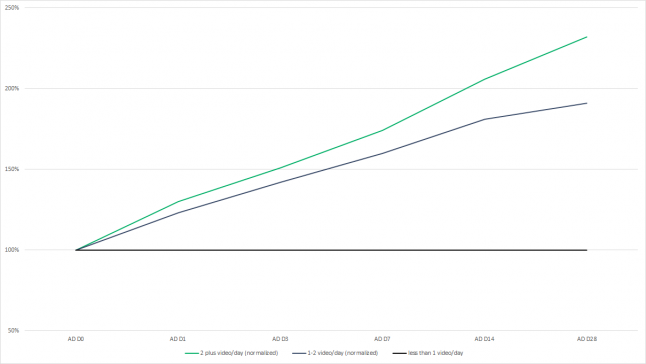 The green cohort watched 2+ videos per day, grey-blue - between 1 and 2 and the black cohort is a “normalized” basis of paying users that watch less than 1 video per day. To be completely clear: a player who watched a video once and then stopped watching them at all - is in the last cohort.
We can see that not only do the ads have no negative impact on the retention, but on the contrary - we see higher retention among paying users that interact with the ads. And retention of paying users is, definitely, one of the crucial metrics for any F2P game.

Increasing the number of placements

When thinking about placements, one has to wonder about the best approach:

The second placement was added to Megapolis two months after the first one. By then, we had already collected data about the effect of ads on game monetization and a number of its other metrics.
The second placement is called “Construction”. Its UI is also a part of the core gameplay and familiar to the players:

In Megapolis, the player does not build the whole complex immediately, but gradually develops it. For instance, in the screenshot above you can see the Solar Expo Hall buildsite. The player does not know that they have the “watch video” option yet, it looks like standard gameplay to them.
Player can open the Construction window:

In order to upgrade/develop the building to its new level, they have to spend resources that are limited by design. Previously, the player was given the choice of either buying it for hard currency, earning it in the game or asking their friends for it. The Ad Monetization update has added a fourth option - get some resources for watching ads.
What effect did the appearance of additional placement have on Megapolis?
Straight away we’ve seen changes in the number of ad impressions: it has increased more than twofold:

The chart is “normalized” as before. You can see the “pre”-data as 100% and “post”-data is 200%+.
While the growth in impressions is a nice story in itself, it is not the only metric that needs to be tracked. For instance, your impressions may grow simply for the reason that you forgot to put a limit on the number of times a player could watch an ad per day on all placements combined. In that case, your impression limit would automatically increase with an additional placement.

The more reliable and business-oriented metric is ARPDAU. It is relatively easy to measure and reflects effect on game monetization. The chart below shows the normalized ARPDAU: 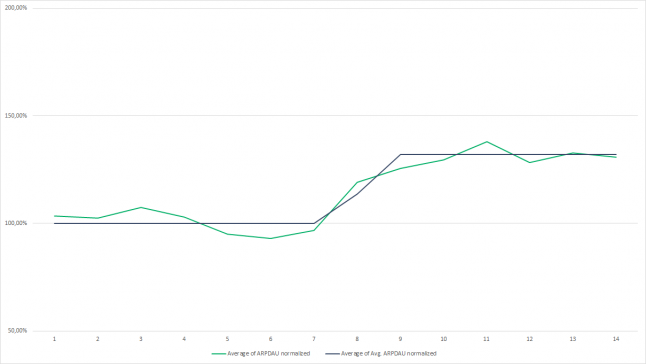 The green curve is the normalized average ARPDAU per week and the grey-blue curve is the average ARPDAU over a longer period of time. Fluctuations from week to week are possible, but we can safely conclude that the addition of a second placement has definitely increased the advertising ARPDAU.

“You can't manage what you cannot measure” - is one of the most, if not the most, a quoted phrase about business. When it comes to ad monetization - which metrics should one measure?
We have four “virtual” groups for ad-related metrics, similar to Tier grouping of geos in User Acquisition:

Social Quantum is not a hyper-casual game developer that makes most of its revenue through ad monetization.
The Megapolis title was launched 7 years ago in a completely different marketing landscape. We have integrated ads 6 years after the launch, into an already existing title with established balance and significant audience that we wanted to retain, not scare away with intrusive, pushy ads.
Still, our case shows that it’s possible to successfully change the monetization strategy of a mature title to prolong its profitable operations. Now we’re monetizing those players who were not monetized before. We’re also sure that ads are not a threat to retention, but in fact, have a positive effect on it. Overall, the integration of ads into an existing title with good planning and the right people behind all of it turned out to be a very beneficial project to Social Quantum.