56% of global mobile game revenue is being generated in Asia

According to video game research outfit EEDAR, the mobile game market will have generated over $25 billion in revenue by the end of 2015, with over half of that coming out of the Asia Pacific region.
Chris Kerr
News Editor
November 17, 2015

According to a new report by video game research outfit EEDAR, the mobile game market will have generated over $25 billion in yearly revenue by the end of 2015, with over half of that coming out of the Asia Pacific (APAC) region.

As it stands, North America is the most lucrative market, generating $5.14 billion this year alone.

Breaking that down, Japan, a country with a player base of 45.8 million, generated $5.16 billion last year. China's 314.8 million-strong player base generated $5.01 billion, while South Korea's 19.3 million mobile gamers added an extra $1.37 billion to the pile.

When it comes to average monthly spend Japanese players top the charts, dropping $9.39 on mobile titles each month.

South Korean players take second place, dishing out $5.91 on average every month, while those in North America and China shell out $3.30 and $1.32 respectively each month.

The report estimates that there are now 1.5 billion mobile gamers around the world, with the revenue they generate accounting for 30 percent of the global gaming market's total revenue.

The research also shows that the North American market is driven by female players, who make up 55 percent of the U.S. and Canada's mobile gaming population. That trend isn't mirrored in the APAC markets, however, with male gamers outnumbering their female counterparts in Japan, China, and South Korea.

Although the gender splits vary by region, the age distribution of mobile players remains largely the same, and most players now fall into the 25-35 age bracket.

Patterns of play are also relatively similar across all regions, with the majority spending 3-4 hours a week playing mobile and tablet games. 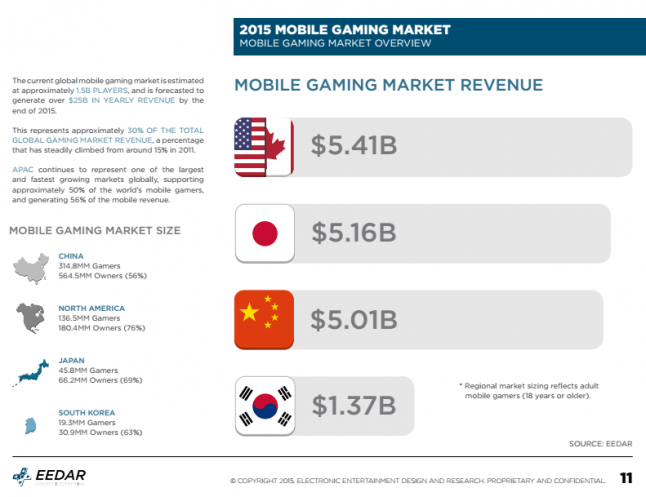