A Quiver of Crows - an indie twin-stick shmup was greenlit after 20 days on Steam Greenlight. In this post, data and lessons are shared from the campaign.
Chad Ata
Blogger
March 11, 2015

After a few years of developing casual mobile games, my team and I decided to take the plunge into Windows/Mac/Linux game development. We started working on our new project - A Quiver of Crows - in May 2014 and eventually launched a Steam Greenlight campaign in January 2015. In this post, I present the data and lessons learned from the 20-day Greenlight campaign.

We’re a small team of 30-somethings (three of us to be exact), and we grew up collectively playing almost every console from the Atari to the TurboGraphx 16 to the Sega Dreamcast and on. Likewise, we’ve enjoyed every genre of game along the way. One particular genre we always returned to is the shmup. There’s a few definitions of shmup out there, but to us it includes the traditional side-scrollers like R-Type as well as crazy twin-sticks such as Geometry Wars. Some of our favorites include R-Type, Ikaruga, Geometry Wars, Super Stardust, Dead Nation, and PixelJunk Shooter just to name a few. In designing A Quiver of Crows, we drew our favorite aspects from each of these games in an attempt to stay within the genre while creating something unique. As a result, the highlighted features of our game include:

Each of the design choices we made early on were made with Greenlight in mind. We’re a tiny studio with neither publisher nor prior PC audience to piggy-back off of, so we were well aware of the importance of getting greenlit. The shmup genre is already less popular than other types of games, and we were potentially carving out an even smaller niche by combining design aspects from side-scrolling and twin-stick shmups. We had mixed feelings about this - a smaller niche meant less competition, but it also meant potentially fewer yes votes on Greenlight. Despite all of these concerns though, we were pretty happy with what we had and decided it was worth submitting to Greenlight. 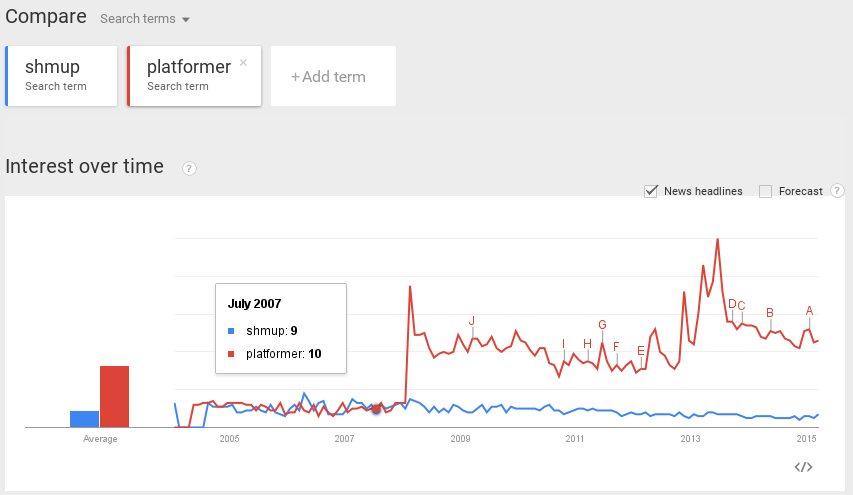 We’ve always assumed the trailer to be the most important part of Greenlight. I have no proof of this, but my reasoning is that it’s the largest most engaging thing the voter sees when going through their Greenlight queue. It’s also arguably the quickest way to judge the game. With this train of thought, we gave ourselves several weeks to record and polish the trailer.

In preparation for the trailer, we polished three levels of the game that showcased the most amount of art and enemy variation. Recording was done on OSX (more on our development environment here) with Screenflow and editing with Adobe Premiere. We recorded many takes totalling a few hundred gigs of space to capture each of the levels and enemy encounters. All of this was edited down to 1 minute and 26 seconds - 26 seconds longer than we had hoped for. Coming from the mobile space, we’ve had plenty of experience with short attention spans and really wanted to keep the video as short and concise as possible. We simply couldn’t bring ourselves to trim the video down any further since we also wanted to make sure the small target audience we were after would see all the gameplay aspects of the game. The result was a video we are quite satisfied with, but with questionable overall audience retention. As shown below from the YouTube analytics, only ~30% watched the video all the way through to the end. Though, without other Greenlight trailer analytics available to me, I have no idea if this is above or below average.

When voting via the “Next item in queue” button, a game’s icon is probably less influential in affecting a vote since the trailer would be right there for the voter to consume. On the other hand, if perusing the Greenlight library, or looking at all the games in their queue, voters might be inspired to click into a specific game’s page based on its title and icon. An appealing icon should theoretically drive more visits to a page. We chose to make our icon an animated gif in order to help it stand out, and we followed Crawl as an example since it seemed quite effective - looping a few seconds of gameplay then a few seconds of the logo. There were some file size limitations and it took us longer than expected to cram as much content as possible into the gif. We tinkered with gifsicle, ffmpeg, compressor.io, and ezgif.com until we found the most optimal settings.

Prior to putting together our Greenlight page, we had reviewed several other successful games’ greenlit pages. Some also had shared stats and tips, which was very helpful (and inspired me to share our stats in this post). Of all the games we reviewed, Crawl and The Masterplan were amongst our favorites, and we used their Greenlight pages as good examples to follow. Specifically, the main lessons we learned from their pages included:

One other lesson we missed was brought up by the VHS Story dev in their blog post - you can use the “[img]” tag in order to insert images into your description. That would have been a nice touch.

Before launching our Greenlight page, we created a Steam Concept page as a trial run - more on the results from that here. No major red flags were spotted on the concept page, so after several days we launched the Greenlight campaign on January 6, 2015. 20 days later, A Quiver of Crows was greenlit.

The first 4 days of Greenlight were very exciting. Most of the visitors we received were driven to our page in those first days - peaking at over 900 visitors in a single day. Votes and comments rolled in almost immediately. Some questions were asked as well, to which I responded directly in the comments. We never put the discussion threads to use, though it probably would have been a good idea to do so. By the 5th day though, traffic dipped below 100 visitors a day and then stabilized between 20-40 visits a day. At this point we started promoting the Greenlight page by reaching out to press and posting on gaming forums, Facebook, Twitter, and pretty much anything that had a submit button on it. Our expectations were low because we rarely see the press cover Greenlight campaigns. To our surprise we were covered by a few small sites, but they hardly registered a blip on our visitor graph.

By the end of second week, we were starting to feel pretty sad. Traffic had slowed down so much, and we had no way of boosting it without spending a pile of money on ads - so we kept beating the marketing drum and started transitioning our brains back to developing the game rather than promoting it. Then on a lovely Monday, when we had accepted the possibility of our game being on Greenlight for months, we got greenlit! What a morale boost that was!

At the time of being greenlit, the most interesting stats included: 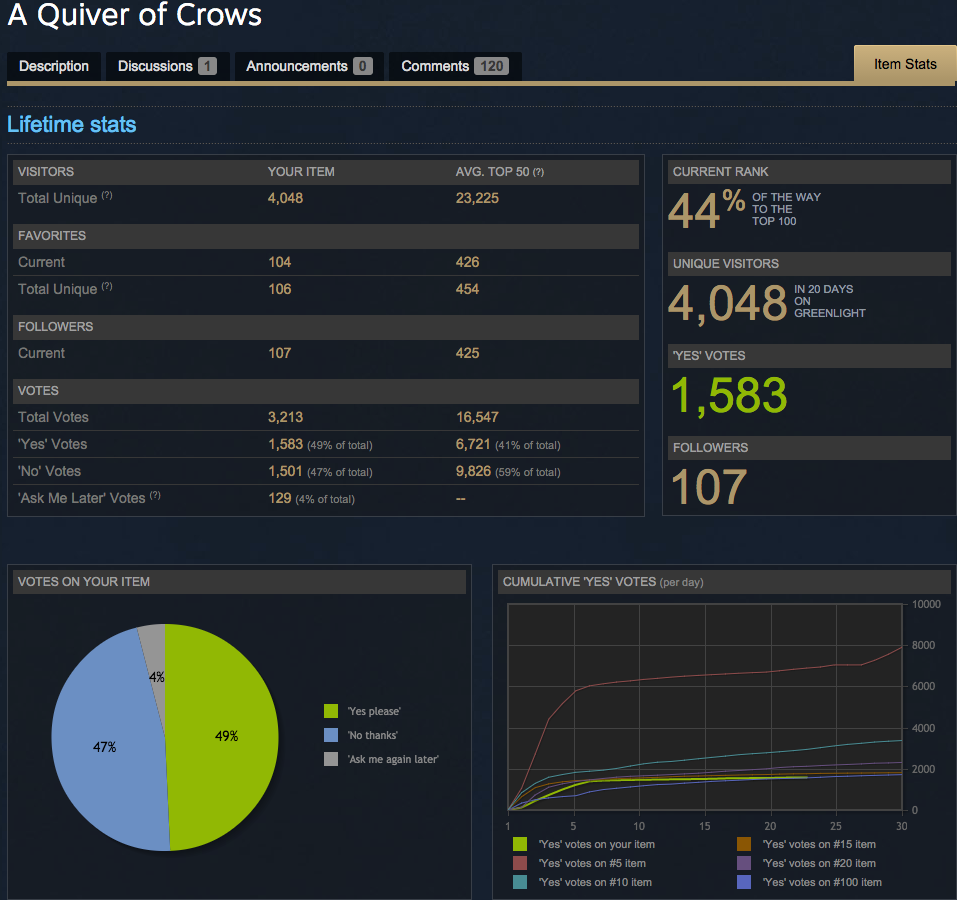 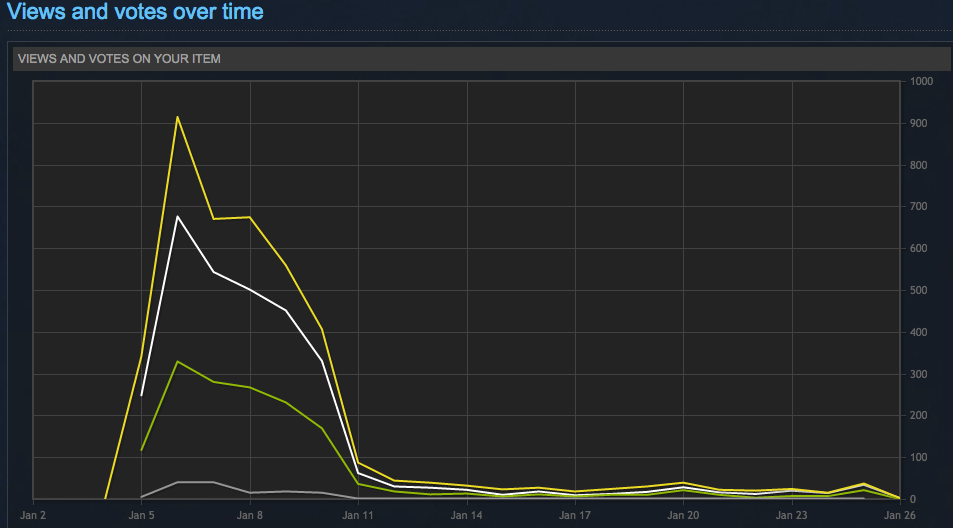 Throughout the 20 days on Greenlight I found myself obsessively refreshing the stats page. Whenever my team posted anything I would check it to see if it had any boost to visitors or votes. I even refreshed the list of recently greenlit games to see what other games were getting greenlit. After a few days of doing that I discovered the GreenlightUpdates website, which made it very convenient to see the daily changes that occurred on Greenlight. Contrary to my expectation, I was seeing several games being greenlit every few days.

To satiate my thirst for more data I also set up a Google Analytics dashboard to easily review the info that mattered to me most. I also used Google Analytics Real-Time reporting whenever we posted to a social network or forum in order to immediately see its effect on traffic. The most interesting stat I learned from Google Analytics is that 14% of our visitors are Russian, which now has us seriously considering localizing the game into Russian prior to launch. 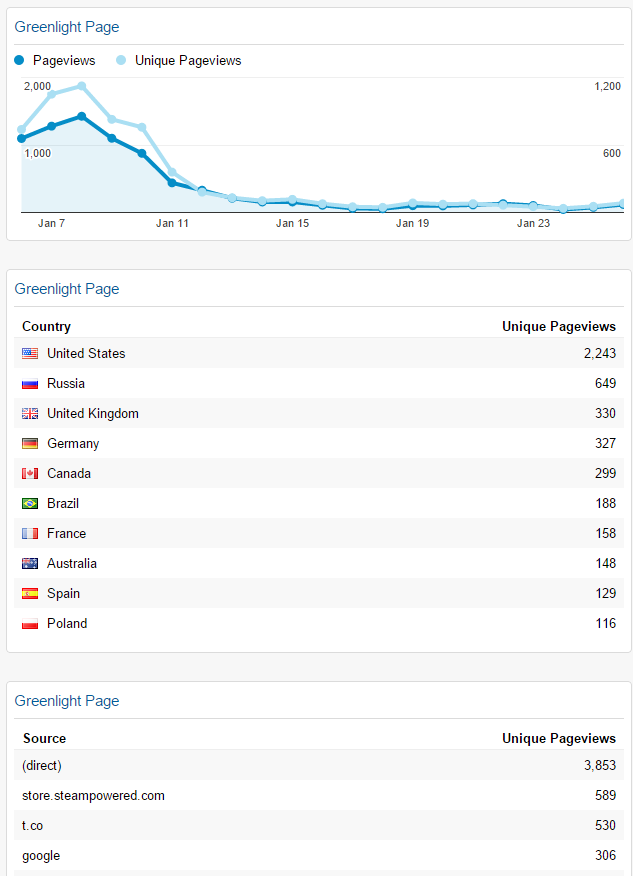 Getting on Steam seems to be a requirement for most indie developers trying to enter the PC market, which in turn means having a successful Greenlight campaign. For us, a polished trailer, an animated icon, a good variety of screenshots, and a neatly organized description likely helped us get greenlit. From our stats, we learned that the yes/no vote ratio seems to carry more weight than the top 100 rank position. We also saw a significant amount of non-English speakers on Greenlight, which has us considering localization sooner rather than later.

Hopefully you found the stats in this post helpful. Best of luck with your Greenlight campaign!

Founded in 2010 by two guys and a gal, our goal is to make the world a happier place, one app at a time. We are currently working on our next game, a twin-stick shmup with a feathery twist for Windows/Mac/Linux called A Quiver of Crows.