Videoball, and the challenge of designing (and selling) simplicity

"It's about shapes and its about visibility. It's designed for legibility. Everything is designed for the eyes - for human eyes to be comfortable."
Bryant Francis
Senior Editor
July 28, 2016

Tim Rogers, occasional Gamasutra contributor and director of the recently released Videoball, has been doing everything he can to put his game's best face forward. Firstly through creating a visually straightforward competitive game with clear rules that quickly communicate its fun factor to the casual observer. Secondly, through creating infomercial-style ads and footage of highly-level play, .

Even so, after years spent thinking about design and marketing, he now finds himself drowning in advice on how he could have done his job better.

Easy on the eyes

"It was really fun to imagine the mathematically, logistically perfect sports game right down to the graphic design style," says Rogers.

Videoball is a competitive game that, when played well, is a frantic experience. Visually, it looks like an overhead view of a bunch of player-controlled triangles moving around an abstract soccer field. With up to three balls bouncing around a court and several players firing their own shots to knock the ball into the goals, there is a lot going on in a single screen.

It was tricky to make all of that information immediately clear to the player. "It's about shapes and it's about visibility," says Rogers. "It's designed for legibility. Everything is designed for the eyes - for human eyes to be comfortable."

"We put rounded edges in the game later because of a couple of psychiatry papers I've read," says Rogers. "Round curves help people discern geometry better than sharp angles do. It's all about visibility."

Rogers released preview videos that were designed to be quirky enough to get passed around. In the release announcement video, he says, "Now Videoball is done, and I'm done with Videoball."

Rogers says he has been growing an audience of positive Videoball players and that his sales numbers are growing. Now he's hoping that people on Twitch and YouTube can help demonstrate the appeal. "We need people to play it, people to stream it," he says. "That's how you promote games."

But he's finding himself spending a lot of time fielding input on how his game could sell better with a few design changes, a shift in visual style, or changes to the game's core design. "I'm getting a huge amount of armchair advice -- more than any game I've ever worked on," he says.

Since release, people have been bombarding Rogers with advice on how he could jazz things up to increase sales, or alter aspects to improve his design. "It's sort of dangerous to release a game that looks very simple," says Rogers. "If we fit in all of the loudest ideas [we're getting], they would just break and shatter the game."

"One suggestion I keep getting a lot of is that 'If you really wanna sell this game, all you gotta do is just make it look like Tron. Just black backgrounds against neon,'" he says. Other suggestions are that he should make it look more like a big-budget title: "Just triple-A it up. Make [game pieces] cars. Make them tanks. Make them airplanes. I don't know man. Just put some stuff on there."

When one sees Videoball screenshots, it may not be immediately clear what it is, or at least not compared to something like a Gears of War screenshot. "When somebody sees a chainsaw gun, nobody gets mad that the chainsaw kills," says Rogers. "Not having [a visual style like] that in the game makes it very difficult and invites the perception and presumption that maybe we didn't put in the effort." 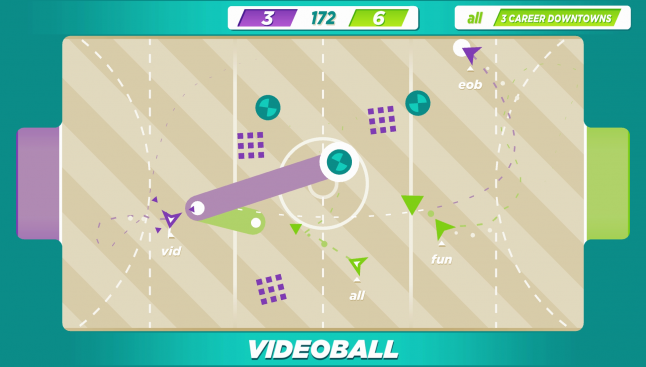 "I've been called out by some Linux users saying 'If your game is really about visibility, screenshake makes it hard to see stuff,'" he says. "It maybe does, but it might also serve a psychological purpose in forcing you to scan - to move your gaze, to flutter a bit. It's better that it shakes because it's making you reassess - it's keeping you on your toes. But I'm told that that's utter nonsense."

Rogers would later clarify he did add a screenshake toggle in response to this feedback.

"One guy says 'The ball wobbling doesn't serve any purpose.'" The collider doesn't change. It is still an exact sphere. So it's highly possible that if you possess 40/10 vision, you'll notice the triangle isn't touching the ball before it hits it while it's wobbly. So maybe it's frustrating if you have the eyes of a peregrine falcon. So, any peregrine falcons playing the game - I'm sorry."

Some of the player demands are not just aesthetic issues but fundamental design decisions. For instance, there's a "hit pause" that occurs when one of the balls is hit, causing a spontaneous change or direction. The hit pause after a player smacks the ball indicates to anyone playing the game that something important has changed, and often gives enough time for players to figure out what that change is. It adds clarity, which was a core aspect of the game's design, yet some view it as an irritating oversight in how Rogers created the game.

"The 'hit pause' is the one thing that gets the most complaints. I just get someone saying 'Just give me the option to turn it off.' I say, maybe we could for local multiplayer, but they say 'No, I want to turn it off online,'" says Rogers. "That's not how time works. You'd have to turn it off for everybody then, because otherwise, you'll be a whole 4-5 seconds ahead." 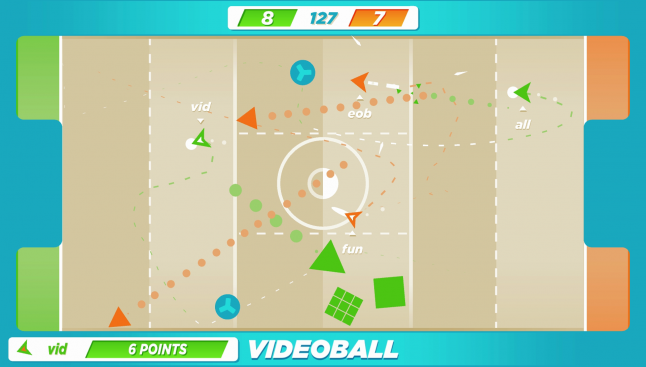 The advice is never-ending, always offering Rogers some way that he could tweak the game to improve sales. "I'm hearing, 'What if there was a 2nd button, and when you pressed it, your character could catch and hold the ball"' says Rogers. "That's…uh…not our game. Our game is about indirect possession. Influence vs. direction. I think influence is more interesting for a game because it allows all kinds of events to exist at the same time and allows multiple balls to enrich that."

It can be hard to split the difference between accommodating your audience and defending your vision for your creation. That becomes more and more difficult as "audience" and "paying customer" become increasingly less synonymous.

"This guy was like 'I'm digging Videoball. I dig it.'" says Rogers. "He uses the word dig it, as though he's playing it. 'You'll have my money if you make a Vita version.' What? What are you digging? Are you digging videos of it?"