Lost Castle and the increasing viability of Chinese indie games

The People's Republic of China has a higher population than any other nation on the planet.

That's a big audience with a proven appetite for video games, but political and economic factors have played into creating a market there which is rife with piracy and dominated by free to play. However, thanks to Steam gaining support for some Chinese forms of electronic payment last year, change is in the wind.

On September first, Chinese indie title Lost Castle will launch out of Early Access. It's already sold 130,000 copies, and 100,000 of them have been sold in China.

According to Iain Garner, who has been working with Chinese game developers for about four years and currently represents Lost Castle's publisher Another Indie, the introduction of Chinese payment methods to Steam didn't knock free to play off the top of the hill in China. It did, however, give players more options. "The first game to make a real impact via Steam was GTA V," he says. "Like the rest of the world, gamers here were anxiously awaiting the title and when it came out, many decided that now was the time to give legitimate gaming a go. Since then, China has steadily risen and is now the third biggest purchaser on Steam according to SteamSpy." 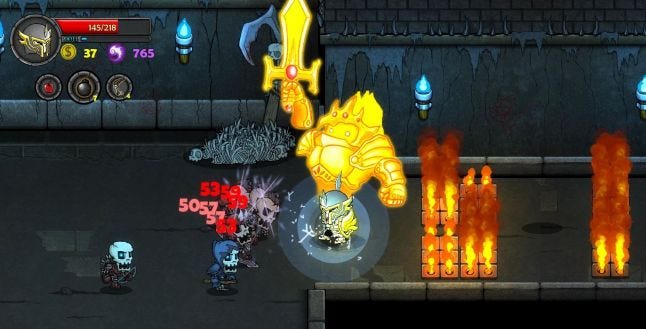 In addition to this general rise in premium game purchases by Chinese players, Garner has seen that a significant number Chinese gamers are willing to support local indie developers. "Lost Castle experienced this on a dramatic sale by selling 60,000 copies in China during the very early stages of its Early Access," he says. "That number has now risen to 100,000 despite relatively little marketing."

"And we are not the only example of this," Garner says. "Another Chinese title named Home Behind has sold around 60,000 copies despite being in a rough state, and not being in Early Access. The developers didn't know what Early Access was at the time of launching." He also lists a few other promising Chinese indie titles due out in the next twelve months: Code: Hardcore, Candle Man, ICEY, and I Am The Hero.

The method by which most Chinese gamers talk about their local indie games is WeChat, the dominant social media platform in the region. There are also events and conventions they can attend. "By far the most supportive is IndiePlay, which was held in conjunction with this year's ChinaJoy," says Garner, the latter being the biggest digital entertainment expo in China. "This is a mix of consumer and dev focused events. There are a lot of other conventions which happen intermittently but the only other that stood out was Beijing Comicon, which gave a huge amount of space to indie developers."

This rising enthusiasm from local players has created a better economic climate for Chinese indie developers, but they still have challenges to face. "Free-to-play and piratical habits are incredibly hard to break," says Garner. "Gamers have gotten used to both of these realities, and many of them find the concept of paying for games quite difficult." Additionally, Steam's Chinese payment support doesn't include the most popular online payment methods in China, payment through WeChat itself and ZhiFuBao, which is like Google Wallet or PayPal.

"The other obstacles are mainly governmental," Garner says. "China has strict censorship laws which make game development really hard. Steam is currently a loophole, as developers can sell games via Steam and into China without going through due process. Going through due process would require massive censorship even on games as innocent as Lost Castle because of cartoon blood and skeletons. This means that most developers are still designing games to appeal to a western market as oppose to a Chinese one, as they are not sure how long this loophole will be allowed to operate."

Still, Garner is optimistic about the future of Chinese indie developers. "Lost Castle really was the first of an upcoming wave of indie development, and China really has become a place to watch," he says. "All of these games are very interested in approaching the Western market, so the influx of quality Chinese games over the next few months is going to be worth watching."