It's a milestone that means Epic's popular battle royale effort has outstripped some of the most successful mobile titles of the past two years.
Chris Kerr
News Editor
June 20, 2018

The mobile version of Fortnite has now earned over $100 million in revenue on iOS since launching three months ago.

As reported by analytics outfit Sensor Tower, that milestone means Epic's popular battle royale effort has outstripped some of the most successful mobile titles of the past two years, despite the fact the game was invite-only for two of the 12 weeks it's been available.

As the graph at the bottom of the article shows, Fortnite earned three times more than Tencent's hugely successful Honor of Kings did during its first three months on iOS, and has also earned 335 percent more than its closest revenue rival in the battle royale genre, Knives Out.

What’s more, it also managed to earn approximately 65 percent as much as Supercell's Clash Royale did in its first 90 days, a title that had the most successful launch in mobile gaming history.

Fornite's most well-know rival, PlayerUnknown's Battlegrounds, is someway behind, having only grossed around $5.2 million to date on iOS.

Sensor Tower claims that sizable gap is a result of Battlegrounds' inability to monetize its player base as effectively as Fortnite, with Epic having already stumbled across a "winning formula."

"Epic Games seems to have found its winning revenue formula across console, PC, and mobile, and that's selling limited-time (but non-random) cosmetic items in-game alongside a Battle Pass, which is good for one of the game's seasons that grants holders free items and other bonuses," commented Sensor Tower's head of mobile insights, Randy Nelson.

"We recorded a quadrupling of revenue when the game's fourth season debuted at the beginning of May, and we'll be keeping a close eye on what happens when season five hits. Even apart from Battle Pass sales, we see Fortnite growing its momentum on mobile, and there are no indications of it slowing there, or anywhere else."

Indeed, Fortnite remains a popular offering across all platforms, and recently pulled in 2 million downloads during its first day on the Nintendo Switch, having also racked up 125 million registered players worldwide in under one year. 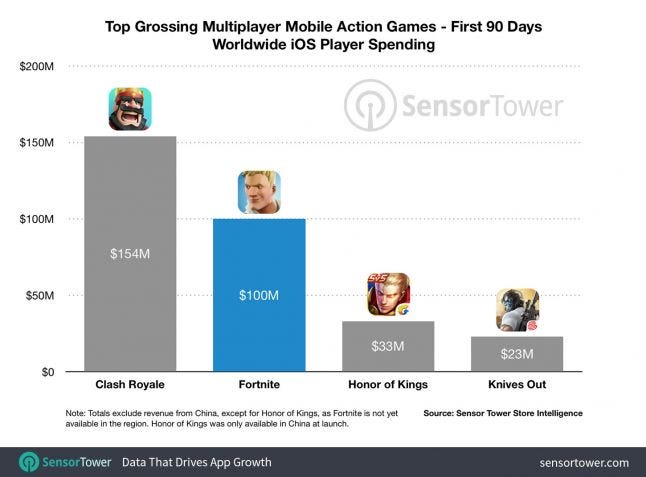