The company attributed that upswing to the release of "major titles" like Final Fantasy VII Remake and Marvel's Avengers, rising digital sales of catalog titles within its HD Games sub-segment (pictured below), and a "turn to profit at the operating line."

Elsewhere, sales within the MMO Games sub-segment declined year-on-year following the launch of expansion packs for Final Fantasy XIV and Dragon Quest X in the previous fiscal year. Operating income rose, however, in part due to recurring revenue from those two titles.

As for the Smart Devices/PC Browser sub-segment, both net sales and operating income increased year-on-year thanks to positive showings from titles like Dragon Quest Walk, War of the Visions: Final Fantasy Brave Exvius, and Dragon Quest Tact.

Looking ahead, Square is sticking with its financial forecast and still expects to see consolidated net sales of 290 billion yen ($2.7 billion) and profits of 24 billion yen ($227.7 million) when the fiscal year ends on March 31, 2021. 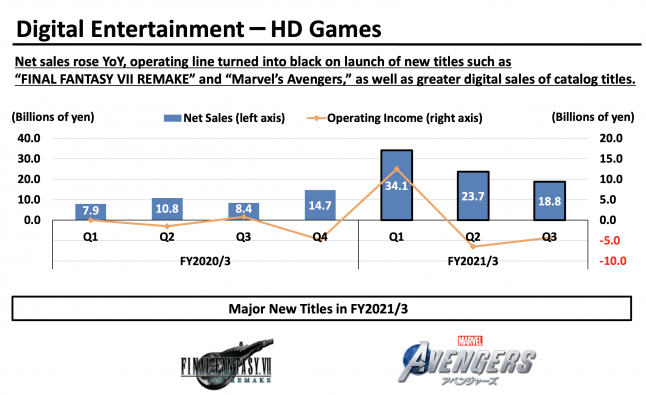