Respawn's battle royale (and big EA moneymaker) Apex Legends was the victim of an unusual hack over the holiday weekend, one that sent its developers scrambling during a time period they were meant to spend with friends and family.

In an attack that prevented users from starting a round of Apex Legends (but didn’t compromise user information), a group of hackers hijacked the game’s mass-messaging system and playlist feature to promote a niche cause: stopping hacking and Distributed Denial of Service (DDoS) attacks on Respawn's Titanfall and Titanfall 2.

When logging in (or completing a match), players would be greeted by a banner stating “IMPORTANT MESSAGE" and "visit and share savetitanfall.com”.

Upon clearing the message, Apex Legends players saw a similar message in a square box that normally indicates their chosen game mode. 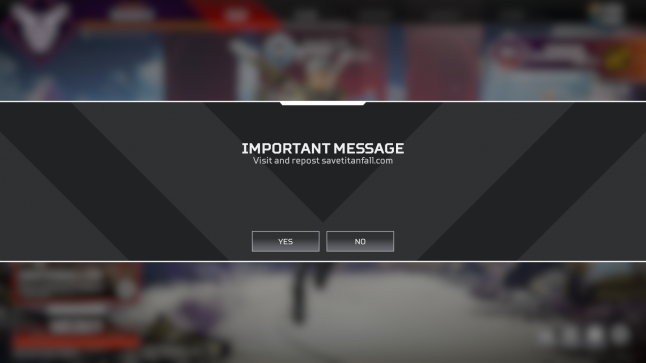 Where they’d normally see something like “Trios,” “Arenas,” or “Firing range,” other, hacker-authored messages like “SAVETITANFALL.COM|bruh,” or “TF1 is being attacked so is apex,” would instead appear.

That second message had a more sinister side effect: it blocked players from selecting the game’s normal playlists that would start up a round of battle royale or the game’s new Arenas mode. 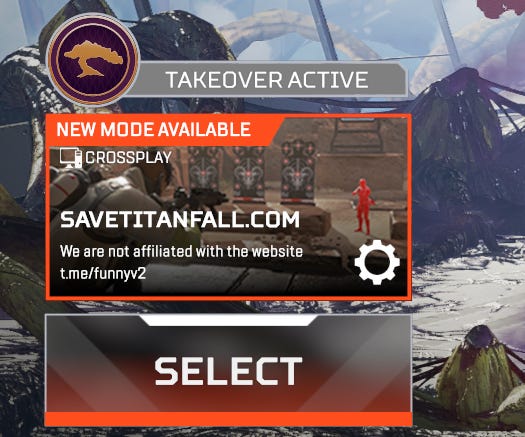 Multiple players (including yours truly) were able to workaround the stoppage by closing and restarting the game but the impact was far greater on the developers. Respawn communications lead Ryan K. Rigney was one of those who rushed in to help correct the hack.

“I was holding my newborn nephew when I found out about the Apex hack,” he wrote today. “Had to hand him back, go work, and miss out on a day with family.”

Respawn has been fighting DDoS attacks on its servers for the last few months—they’ve been hitting Apex Legends alongside its Titanfall predecessors. They act not only as a disruption to players, but also a way for hackers to rack up kills on disconnected players (before eventually being banned).

Sunday’s attack however exploited a different vulnerability in Apex Legends to send a message to the developers that they’ve already heard. Respawn has acknowledged the DDoS challenge on several occasions, and the company has recently hinted that it’s investigating legal action as well.

The Titanfall community affiliation could still prove to be a fake by hackers with different motivations, but Sunday’s events do highlight the real struggle developers endure when hackers can attack their games under the guise of airing a particular grievance.

It’s not just that they can take a game down, it’s that they can time the attack to be extra disruptive to security and marketing staff hoping to spend time with their families on a holiday weekend.

Hopefully Respawn opts to reward employees who punched in with extra time off, and publisher Electronic Arts takes seriously how its employees’ lives can be disrupted by these types of events.

And it can't be stressed enough, the hack in question did nothing to move forward any of Respawn's efforts on stopping any of the ongoing DDoS attacks. It was a disruption that only served to anger players and disrupt the lives of developers who work to keep these games online in the first place.