The "rhythm violence game" Thumper is well-suited to VR. “We wanted to make a game that was also an ‘experience’, something you can get lost in and overwhelmed by," explains co-creator Brian Gibson.
Alissa McAloon
Editor-in-Chief
October 11, 2016

Thumper has been a six-year passion project for the two-man indie dev team known as Drool. Comprised of former Harmonix programmer Marc Flurry and musician Brian Gibson, a bassist for the band Lightning Bolt who also contributed to many Harmonix titles, the pedigree is certainly there for a game that utilizes the familiar "note highway" style.

Thumper has been described as a "rhythm violence game." Players control a space beetle as it navigates down colorful tracks, building up power for boss battles. Its stylish yet relatively simplistic appearance masks brutal pacing and aggressive mechanics, which are perfectly reflected in the accompanying audio.

With Thumper finally set for release on PC, PS4, and PSVR, Gamasutra talked to Flurry and Gibson to find out more about the long process of development, and how VR allowed them to intensify the play experience.

The project began with an idea of how a music game might work if it were stripped down and simplified. “I made a short 30 second video mockup years ago, during my time working at Harmonix,” says Gibson. The goal was a game in which player actions seemed to create the soundtrack, like "real physical sound effects." 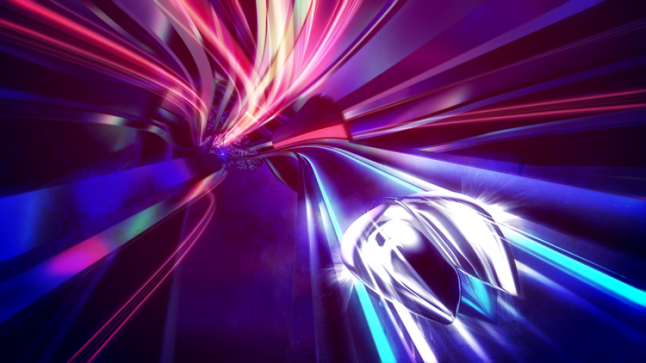 He and Flurry started working on prototype in which the influence of Audiosurf, Rez, and the F-Zero series is evident. But Gibson says he was also influenced by the emergent soundtracks of classic games. "There's the rhythm in Space Invaders as the enemy ships would move in rhythmic increments," he says. “Even in Super Mario, the coins, mushrooms, and fireballs all integrate with the soundtrack in a musical way.”

Thumper is about anticipating beats and listening for audio cues at a fantastic rate of speed. As your space beetle caroms around, it seems to be producing a sort of wrenching, rhythmic music. “One thing that is important to us is that the gameplay audio sounds like it might be coming from the game’s physical interactions,” explained Gibson. “Things like the sound of metal scraping on metal, or a physical thud when you pound on the ground, or the drone of your wings buzzing. We wanted these to act simultaneously as plausible sound effects, as well as percussive and tonal elements in the soundtrack.”

Trial and error formed the basis to the now distinctive sound effects, with the pair “trying a million different things and seeing what felt right."

Thumper was not designed with VR in mind, but the medium seemed well-suited to the vision that Drool had been pursuing. “We wanted to make a game that was also an ‘experience,’ something you can get lost in and overwhelmed by," explains Gibson. "A VR version seemed like a worthy experiment…” 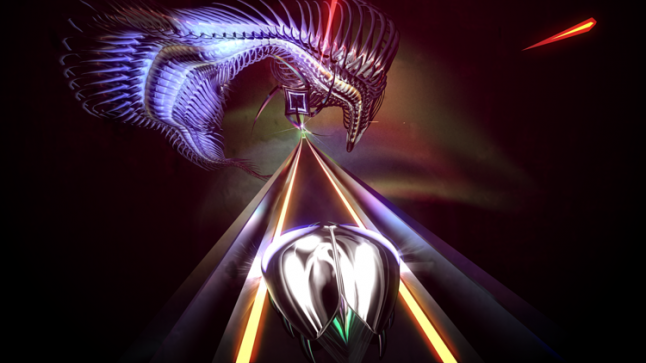 Previews note that the 2D version of Thumper has uniquely unnerving gameplay. But many claim that the VR version is downright nerve-wracking, and even more immersive. Gibson goes so far as to suggest it’s almost a different game.

Field of view tweaks needed to be made for the VR version. Paths felt flattened and shallow in VR, so they were stretched out, and turn angles were reduced.

The most substantial change implemented for VR was making the fearsome bosses much bigger, since they didn't need to be bounded by the edges of a screen. The Drool team believes that the removal of ‘edges’ is easily one of VR’s best features. 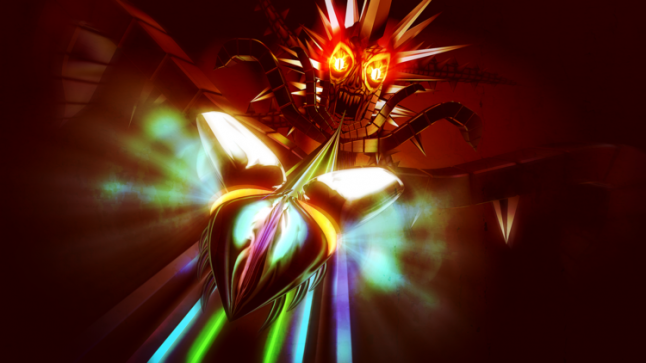 A boss battle from Thumper

The bosses that loom so much larger in VR were inspired by the movie 2001. “The atonal dissonance, which Kubrick used when you'd see the monolith in that film, was a big influence on us,” says Gibson.

In fact, the stark simples lines of the entire game world was inspired by the work of Stanley Kubrick. “Perfect geometry can be this expression of a type of cosmic horror," says Gibson. "So utterly unnatural, alive through its own incomprehensible logic.”

“The visual look is in many ways the result of custom vertex shaders we built to create perfect bends on the path and tentacles in the world,” he adds. “Reflective materials wrapping around these smooth bends looks amazing, so we made the look of the game based around that motif.”

The tweaks and adaptations required for the VR port were relatively minor, thanks to the fact that they were using a bespoke game engine. “Pre-made tools often give you 90% of what you want, but the last 10% is very important to us,” explains Flurry.

“Initially, we had a 2D game running at a shaky 60Hz. Now our game also supports VR at a solid 90Hz,” explained Flurry. “If you’re using Unity or another commercial engine, you often can’t make deep optimizations or get as close to the metal. I doubt we could have achieved what we did without our own engine.”