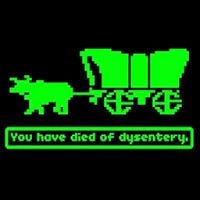 [Video Game Deep Cuts is a weekly newsletter from curator/video game industry veteran Simon Carless, rounding up the best longread & standout articles & videos about games, every weekend. This week's highlights include CIA board games, the art of escape rooms and The Oregon Trail's genesis.

Huzzah - have managed to get the newsletter out extra early this weekend - wonder if it helps with open rate? There's over 400 of you on this list currently, by the way, plus I tend to get 700-1,000 page views on the Gamasutra crossposted version. I'd call that a good result in today's micro-attention intellectual economy. (But I want more, of course.)

Anyhow, quite a bit happening this week - and in addition to the YouTube GDC talks I posted below, the GDC Vault is up, with 170+ free videos from the 2017 show, hundred of free slide decks - and 500+ videos in total if you were a select GDC passholder. Not linking individual lectures from there because I'll be adding the YouTube versions as they gradually get xposted over the next few months, but there's some amazing talks out there - thanks again to all our speakers.

Escape to another world (Ryan Avent / The Economist 1843 Magazine)
"Like millions of people of a certain age, the Nintendo Entertainment System (NES) had occupied a crucial place in Mullings’s childhood. It introduced him to video gaming, gave him a taste for it, made him aware of the fact that he was good at it: a “born gamer”, in his words. Yet the pixelated worlds of the Mario brothers, for all their delights, were nothing like the experiences available to gamers today."

'Witcher' Studio Boss Marcin Iwinski: 'We Had No Clue How To Make Games' (Chris Suellentrop / Glixel)
""We were small, unknown guys from Poland," Marcin Iwiński, the co-founder of CD Projekt Red, said last year when The Witcher 3 beat out games like Fallout 4, Metal Gear Solid V, and Bloodborne for the Game of the Year award at the Game Developers Choice Awards in San Francisco."

The Shrouded Isle and embracing darkness in games (Katherine Cross / Gamasutra)
"PAX East’s indie offerings sometimes have unexpected themes emerge from the potpourri; a couple of years ago it was young women as detectives. This year, a subtle current among the games on offer was exploring life in cults from the inside."

Why math is strangling videogame morality (Jody Macgregor / PC Gamer)
"What's disappointing is that in the 22 years since Ultima IV, the math governing most morality systems in games has gotten more complicated, but it's still math. And it's still there. When our behavior is tied to an equation we've been trained to understand over the past two decades of gaming, the exciting nuance that should lie at the heart of moral decisions tends to disappear."

The CIA uses board games to train officers—and I got to play them (Sam Machkovech / Ars Technica)
"The two groups of South By Southwest attendees split up in this conference room hesitate to get up. They were testing out the weirdest training exercise the CIA has ever publicly revealed: board games. These aren't off-the-shelf games; instead, CIA officers designed and assembled these elaborate tabletop games to reflect the realities of the CIA's day-to-day operations."

Balancing survival gameplay and RPG progression in Conan Exiles (Alan Bradley / Gamasutra)
"Funcom's Conan Exiles, one of the latest challengers to the throne that Minecraft built, pushes this kind of progression to the logical extreme, not only tying player’s stats -- things like strength and stamina -- to its leveling, but also locking the majority of its buildings and tools behind it."

What it’s like making games in Pakistan (Basim Usmani / Polygon)
"Chappal Strike, a play on shooter Counter-Strike, is a student-made game in which the player launches chappals — Pakistani sandals — to take down army helicopters. The game is rooted in one of Pakistan's darkest moments of 2016."

Are Teenagers Replacing Drugs With Smartphones? (Matt Richtel / New York Times)
"With experts in the field exploring reasons for what they describe as a clear trend, the novel notion that ever-growing phone use may be more than coincidental is gaining some traction. Dr. Volkow described interactive media as “an alternative reinforcer” to drugs, adding that “teens can get literally high when playing these games.” [SIMON'S NOTE: not really sure where this theory fits into app refreshing, games and endorphins, but flagging it as intriguing.]"

The story of Crash magazine (Graeme Mason / Eurogamer)
"If, like me, you were a ZX Spectrum fan growing up in the 80s, one of its trio of passionately assembled and dedicated magazines was an indispensable read... Sinclair User was the longest serving, and had a drier tone; Your Sinclair (formerly Your Spectrum) gleefully brandished its off-the-wall humour in each issue, and is especially revered today. But for me, and many others, our magazine of choice was the appropriately-titled Crash, published by Ludlow-based Newsfield."

Choices, Episode (Emily Short / Emily Short's Interactive Storytelling)
"There are several thriving brands of interactive fiction on mobile that tend not to get a huge amount of coverage in the traditional IF community, despite their large player base. They’re placing well on the app store, though, and GDC talks increasingly cover them — so I went and had a look at a couple of the main contenders. [SIMON'S NOTE: Also see How Episode became the world's biggest interactive fiction platform.]"

How to Make an Escape Room (Laura Hudson / Feminist Frequency)
"Laura E. Hall wants you to get out; she really does. As an escape room designer, she’s created numerous live-action mysteries where teams of intrepid players sealed in a real-life room must rifle through clues and solve puzzles in hopes of getting out before time runs out."

Meet the Swedish Politician Who Streams 'Hearthstone' (Luke Winkie / Glixel)
"There is a unique tranquility in watching a man calmly break down Scandinavian political policy while piloting a Beast Druid deck. So if you're like me and you're in need of a reminder that government isn't always stupid and evil, I highly recommend the Hearthstone Twitch stream of Rickard Nordin."

LawBreakers isn't trying to be an Overwatch killer (Tom Marks, Mark Paget / PC Gamer)
"First-person shooters had a big year in 2016, something that wasn't necessarily expected when Gears of War creator Cliff Bleszinski and Boss Key Productions revealed LawBreakers in 2014. Since then, Overwatch has sort of become the de facto leader of the character-based shooter movement, but when we met up with Bleszinski at PAX East 2017, he told us that he isn't trying to make an Overwatch killer."

Classic Game Postmortem: Oregon Trail (Don Rawitsch / GDC / YouTube)
"In this GDC 2017 postmortem, Oregon Trail creator Don Rawitsch sets off on a journey to explore the development of this classic educational game that took the world by storm."

How Osiris: New Dawn calculates monster crab scuttling (Philippa Warr / RockPaperShotgun)
"So I’ve played enough of Osiris to know that you’ll be minding your own business, looking at a tree, and then a crab will come and try to cave your skull in. It’s not a proper crab in the sense of earth taxonomy because it has four legs, but it has a carapace and a set of angular legs that have a very crab-ish/lobster-y aesthetic."

'Nier: Automata' Director Taro Yoko Doesn't Envision a Happy Ending for Humanity (Matthew Walden / Glixel)
"Nier: Automata has finally thrust the reclusive Yoko into the spotlight, with its impeccably polished action offering a more accessible entry point to his fascinating universe filled with heartbreak and introspection. Recently, Yoko has become equally recognized for the grinning, skeletal mask he dons in public, as well as his cryptic and playful answers to interview questions. So it's a particular treat to have a candid conversation with him about his career and legacy so far."