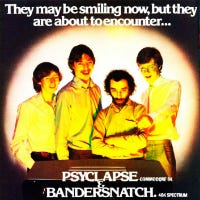 This week's highlights include pieces on formidable '90s-style first-person shooter Dusk, the classic '80s game that inspired the Black Mirror episode Bandersnatch, and a surprising mega-roundup of 2018's best 'game jam' games, among many others.

And here we go again, catching angles & finding a whole bunch of esoteric & interesting (to me, at least!) pieces. Am still mega-busy on final prep for GDC 2019 - have a couple of killer Classic Game Postmortems to be announced VERY soon, to join the likes of Lemmings, Command & Conquer & Spider-Man 2's classic web-slinging mechanic.

In addition, we just confirmed our new 'Main Stage' presentation in the big awards room, too - with the creators of Dreams (in a special interactive music jam!), No Man's Sky's Sean Murray on turning around public opinion, & a concluding inspirational talk from Laralyn McWilliams  - presenter of this amazing talk in 2018 - that I'm really looking forward to.

The DeanBeat: 12 predictable predictions on gaming in 2019 (Dean Takahashi / VentureBeat - ARTICLE)
"I’m making my annual predictions for the game industry again, not because I’m good at it, but because it has become one of the annual rites of December for me. I’m usually wrong or predictable when I make my predictions, but one day I’ll get right. I can’t be wrong all of the time."

Leapfrogging Trico: Vane’s journey from Last Guardian appetizer to dessert (Steven Wright / Polygon - ARTICLE)
"When game developers sit down and start to build the ideas that haunt their dreams, they usually begin with a genre, a mechanic, a character, or perhaps a hook to hang an ambitious script on. For the upcoming adventure game Vane, however, it all started with a feeling."

50 game releases to look forward to in 2019 (Oli Welsh / Eurogamer - ARTICLE)
"It's perhaps a little far into the new year already to be offering you a preview of what's to come - sorry about that - but piecing together a full picture of coming attractions in 2019 hasn't been easy. After a first quarter packed with big releases and dominated by EA's would-be juggernaut Anthem, the picture is quite hazy, with big names being scarce and release dates - even of the very loosest variety - even scarcer. [SIMON'S NOTE: but they tried anyway, and it's fun!]"

A Conversation With Sega's Localization Team On Censorship, Consistency, And Comedy (Imran Khan / Game Informer - ARTICLE)
"Sam Mullen, localization director at Sega/Atlus, and localization producer Andrew Davis joined us for a roundtable conversation about the ins and outs of localizing games like Yakuza and Persona. Rather than a traditional interview, Mullen and Davis mostly talked about how these games end up on U.S. shores, so we've presented the subject matter and posted what the two localizers talked about."

IGF Nominees, Steam Top Games of 2018, PS4 Sales Data & GRIS! (Ryan Clark / Clark Tank / YouTube - VIDEO)
"This week (recorded January 4, 2019), we take a look at the IGF nominees, take a look at Steam's top games for 2018, analyze some rare PS4 sales data, and we play GRIS by Nomada Studio! [SIMON'S NOTE: if you care at all about Steam sales (and game quality!) analysis, keep watching this series from the Necrodancer supremo and multi-time IGF nominee.]"

Developer Lucas Pope continues to play with the idea of game-player as worker in ‘Return of the Obra Dinn’ (Christopher Byrd / Washington Post - ARTICLE)
"One of the more interesting video game designers on the scene today is Lucas Pope whose games conspicuously tinker with the notion of the player as worker. [SIMON'S NOTE: Yes, we all know about Obra Dinn, just nice to see a thoughtful piece on cultural themed in games in a larger outlet such as the Post. Related: a great in-depth Lucas Pope interview at Ars Technica.]"

How to write a video game story (Colin Campbell / Polygon - ARTICLE)
"The session’s first exercise is to create a protagonist. Yorke asks that I mention the game’s genre in my written presentation, but he’s much more interested in the character at the center of my game than in the way the game plays."

Heavy Metal: Games Under Five Hours Q4 2018 (First Five / YouTube - VIDEO)
"This winter's lineup leans more towards the heavy, introspective side with a lot of exploration of general misery and the human condition. So come sit around the hearth, let the sorrow settle lightly on your shoulders, and let your mind wander to a place a little darker with the games in this First Five quarterly wrapup!"

Group Report: Design Practices for Human Scale Online Games (Various / Project Horseshoe - ARTICLE)
"What are the critical design lessons from these smaller online games—and how can current research and understanding of social psychology help make sense of those lessons? We combined our decades of experience designing social systems for online games and a deep dive into current academic research to arrive at a set of best practices and common pitfalls. [SIMON'S NOTE: part of a set of fascinating outputs, as per normal for Project Horseshoe.]

2018: The Losses (Ethan Johnson / The History Of How We Play - ARTICLE)
"A year goes round, a year goes down. We are back once again with another morbid post hopefully flecked with fond remembrances for the people who have shaped the video game industry. Time marches on and work continues to capture the stories of those who shaped this wonderful hobby that we indulge in."

God of War full interview — The definitive story behind the crafting of God of War(Dean Takahashi / VentureBeat - ARTICLE)
"The story has many nuances, and, since the game has been out for a long spell, we decided to do a definitive interview about the making of God of War with Cory Barlog, the creative director at the Sony Interactive Entertainment Santa Monica Studio. We talked about how the team crafted the story and mechanics of God of War, and why the ending of the game turned out the way it did."

Why is Rogue Legacy's follow-up considered a 'pretty massive failure?' (Patrick Hancock / Destructoid - ARTICLE)
"Naturally, I was excited when the developers at Cellar Door Games announced they were working on another title, Full Metal Furies, even if it was not like Rogue Legacy at all... Two months after release, and the follow-up to Rogue Legacy has less than ten reviews. How could that possibly be? [SIMON'S NOTE: this piece is actually from March 2018, but I saw it referenced in a ResetEra thread about the relative 'flop' of this game - though it looks like it's picked up maybe 30-40k sales on PC now, guessing by number of Steam reviews. But the honesty & raw story here are worth perusing - the game biz can be rough!]"

GOTY 2018: Game Jam Edition (Various / Game Jam Curator - ARTICLE)
"We don’t care about the “God of War”. The growing and shrinking horse balls in “Red Dead Redemption 2” elicit only a weary smile from us. “Tetris Effect”, Shmetris Effect - okay, no, that one actually is great. But we always think that jam games deserve much more attention as they get right now, so that’s why we present you our Games Of The Year 2018, but the Jam Edition, obviously. [SIMON'S NOTE: A best-of-2018 that's ONLY game jam games is a v.interesting idea!]"

How Dead Space's Scariest Scene Almost Killed the Game (Ars Technica / YouTube - VIDEO)
"Glen Schofield, the co-founder of Sledgehammer Games and the creator/director of Dead Space, goes in-depth on the development of the classic third-person horror shooter... Always upping the ante, the Dead Space team decided to create a massive dreadful tentacle that attacks and drags the game's protagonist around the environment. Little did they know, this element would prove far more difficult to develop then they had ever realized.. [SIMON'S NOTE: the full War Stories video series is well worth checking out.]"

The top mobile game genres of 2018 – Top Grossing Charts (Tom Kinniburgh / Mobile Free To Play - ARTICLE)
"The number of games in the charts over each of the quarters is a clear measure of a sub-genres ability to monetize.  These are the 4 reliable giants (Slots, Match3, Turnbased RPG, 4X Strategy) in the top grossing charts and we have covered these in the monetization section of the bible. [SIMON'S NOTE: some notable leaders, but actually quite a lot of different genres in total.]"

The Year-Long, Undercover Plot To Blow Up EVE Online's Most Notorious Space Station (Lee Yancy / Kotaku - ARTICLE)
"In theory, anything can happen in EVE Online, but some things are considered impossible. Well, last month, one of the “impossible” things happened: The destruction of the game’s first-ever Keepstar battlestation, which was kept in a wormhole. Of course, it took 11 months of meticulous planning."

Bandersnatch: the game that killed a company and inspired a Black Mirror episode(Chris Scullion / Tired Old Hack - ARTICLE)
"If you’re the sort of hip cat who’s ‘up’ on all things streaming video, you’ll probably be aware of Bandersnatch, the choose-your-own adventure style spin-off of Charlie Brooker’s fantastic Black Mirror series... What you may not realise, though, is that Bandersnatch is loosely – very loosely – based on an actual ZX Spectrum game that ultimately never saw the light of day. Here, then, is the story of the original Bandersnatch: what it was, what happened to it, and what it eventually became."

More than a throwback: How Dusk nails the best parts of 90s FPS games (John Harris / Gamasutra - ARTICLE)
"Dusk is a terrific 90s-inspired horror-action shooter that, as of this writing, is rated Overwhelmingly Positive on Steam... After years in development including a period in Early Access, Dusk finally hit full release a month ago. We talked to creator, programmer, level builder and game designer David Szymanski about this successful Quake homage."

Why video games are made of tiny triangles (Cleo Abram / Vox / YouTube - VIDEO)
"Triangles are a key part of how these gorgeous, detailed games appear on your screen — the hidden heroes we should all thank as we play. This simple shape helps keep the number of computations needed for each detail as low as possible, allowing the player's computer to process these elaborate games."

Watching Someone Beat a Mario Game Without Pressing Right Is F'ing Wild (Patrick Klepek / Waypoint - ARTICLE)
"It’s early 2019, there aren’t many new games to play. One of the early drops, however, is a re-release of Wii U’s much-maligned New Super Mario Bros. U on Switch. (I'm looking forward to giving it another shot.) While eating lunch last week, I somehow ended up on this wild 18-minute video by YouTube’s Ceave Gaming."