The minimalist sound design of The Witness

'It's a very minimalist game,' says Andrew Lackey, 'which meant we couldn't introduce any sound that was unnecessary, or that didn't fit with the game's logic.' Like, for example, a soundtrack.
Kris Graft
Publisher
January 26, 2016

The Witness, a puzzle game seven years in the making, is just as ambitious as you'd expect from the creator of Braid. But contrary to what its lengthy development time may suggest, many of the game's biggest creative challenges didn't come from what Jonathan Blow added to the open-world puzzler.

They came from what he left out.

Just ask veteran sound designer Andrew Lackey. As the owner of Atlanta-based Wabi Sabi Sound, Lackey has worked on a number of games over the years, from award-winning indies like Ori and the Blind Forest to atmospheric AAA series like Dead Space. He's been working on The Witness for six of its seven years of development, and he says it was wholly unique in its creative demands.

"It's a very minimalist, what-you-see-is-what-you-get kind of game," says Lackey, "which meant we couldn't introduce anything into the world that was unnecessary, or that didn't fit with the game's logic." Like a soundtrack, for instance. Blow opted to use almost no music in The Witness for fear that it would distract players from their primary task: observing the world around them and picking up on its subtleties.

"95% of what you hear is footsteps and ambiences. I really felt like it was important to take a step back and pick one type of shoe, pick one microphone technique, pick a mic and a specific angle, and just record everything fresh."

Indeed, at its core, The Witness is a game about perception. Players find themselves alone on a fauna-less island with no instructions, no overt guides, and no backstory. The only things they do have are their powers of observation and hundreds of puzzles to solve.

For Lackey, this meant figuring out how to craft a sonically immersive world that was also highly functional and consistent. Sound isn't just used to augment the gameplay experience in The Witness; it's there to help you successfully navigate the world. Subtle inconsistencies between something as simple as the sound of footfalls could potentially yield a eureka moment.

To that end, Lackey chose to record nearly all of the game's ambiences from scratch. Typically, sound designers work with pre-existing sound libraries that they have amassed or purchased access to, tweaking and creating new sounds when needed. But Lackey quickly realized that The Witness demanded a sonic uniformity that couldn't be achieved by fiddling with EQ or digitally manipulating previously existing recordings.

"The game really is...well, 95 percent of what you hear is footsteps and ambiences," he says. "I really felt like it was important to take a step back and pick one type of shoe, pick one microphone technique, pick a mic and a specific angle, and just record everything fresh."

Lackey began searching for a place he could record a new sound palette. He found it on an island in the middle of the San Francisco Bay.

"Angel Island had all the surface areas I wanted," says Lackey. "It has this kind of rolling hill topology in a lot of areas, which contributed a really unique sound. It basically became the sonic template for The Witness." 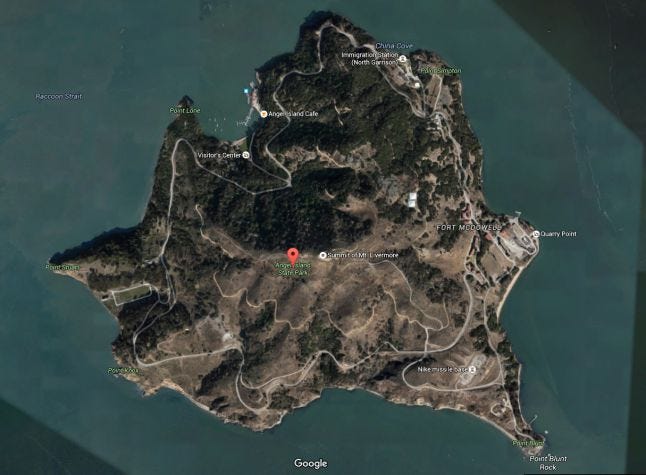 Armed with a Sound Devices 744T recorder, two Sennheiser mics, and a pair of Keens, Lackey assembled the bulk of the library of sounds he needed for the game. [See the annotated maps at the end of this piece for a sense of which sorts of sounds he captured in which locations.]

STITCHING THE SOUNDS TOGETHER

The next challenge for Lackey was finding a way to seamlessly blend all the sounds he had captured.

"With every step you take, the mix of [sound] elements changes slightly, so hopefully you feel the environment is also ever changing," says Lackey. "This was an early design choice to help with the notion that the island is highly crafted and even tiny steps make all the difference in game play."

Similarly, what you hear as a standard forest ambience in the game can be as many as a dozen ambient tracks layered on top of one another that change as you walk. Stand equidistant between four trees, for instance, and you'll hear a more diffuse forest ambience than you would standing next to a single tall tree or a tuft of grass.

The way that Lackey's sounds organically integrate with one another is perfectly in keeping with the overall thrust of the game, which strives to make its puzzles emerge organically from the environment in a way that never seems arbitrary, and lets players tackle its challenges in whatever order they see fit.

AMBIENT AUDIO FROM FOUR LOCALES IN THE WITNESS

To get a sense of the game's dynamically shifting soundscapes, Lackey assembled the following four clips for Gamasutra. "Our brains have a habit of tuning out what they deem to be unimportant sound, even if it's very complex," he says. "We needed our ambiences and footsteps to work in the opposite way—like the way a naturalist or a hunter uses ambiences and footsteps."

Eucalyptus Forest: "The open field sound blends into the very light airy leaves of a eucalyptus forest. The whole island blends this way in any direction you walk. A maple, oak, cyprus and eucalyptus grove all have very different sounds. This subtlety may seem overly hyped, but in a game like The Witness, detail is extremely important. What seems minimal on the surface is actually highly crafted and very, very complex. Also, just from a standpoint of creating immersion...a world like The Witness needed to feel very true for it to be a meditation on details. Since 90% of exterior ambiences of the game are from recordings on Angel Island, the blending happened organically."

Cypress Dock: "Sounds of walking on the wood docks at Angel Island. The cypress grove ambiences ended up being a mix of Angel Island recordings under the docks and a little bit of recording I did in Savannah, Georgia under my grandma Shirley's docks. The tiny little clicking sounds of low tide gas escaping and exposed oyster beds matched this area so well."
Temple: "The island's exterior sounds are very naturalistic, but the interiors are faintly impressionistic. It was important to Jon to express the history of the island this way. I really love how you feel transported when you walk into a space. This particular ambience was created out of Monks chants I recorded in Japan. We used a program called Paul Stretch to take a very short sample and expand it to several minutes."

Beach Bamboo: "For ambiences, you hear the sounds of nearby waves on a beach blending to the far off waves against a cliff. This was using the sounds from the cove at Angel Island. I recorded from many distances so that  blending would work this way.The waterfall is from material I recorded at Kings Canyon National Park--no waterfalls on Angel Island. The footsteps are a literal blend of different types of dirt and grass."

"In the case of the beach sand footsteps, I recorded at the same beach where the ambience was recorded. So I didn't really care so much that there was wave noise in the footstep samples. I wanted blending anyway, so in fact, this was a bonus.On most projects, you go about sound with isolation in mind for maximum reusability and tweak-ability later on. The problem I ran into on The Witness was that I had thousands of footsteps I'd recorded before, but blending them together didn't work. Some would be clumpy because of the shoe type, and others too fast. Also, anything recorded on a foley stage had too much room tone and reverberation. The game was way too subtle, too organic, too minimal for that. That's sort of the conundrum of minimalism -- the less elements you have, the more crafted the elements you do have need to be."

The following maps show all the locations Lackey recorded on the island, along with the specific sounds he extracted from those locations. 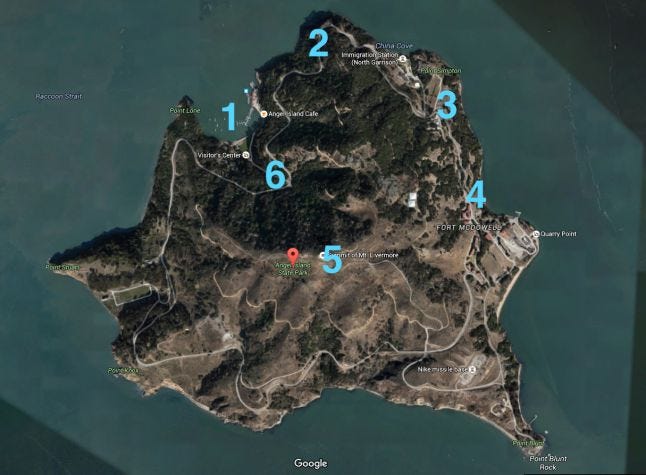