The art of the chase: Level design and player orientation in Outlast 2

Outlast 2 comes alive when players are being chased through the dark game world. “It has to feel chaotic, yet intuitive. When you make it too obvious, some players start to feel they’re on a track.”
Kris Graft
Publisher
May 18, 2017

Outlast 2, which was released last month on PC, Xbox One and PlayStation 4, casts players as a cameraman and woman working on a news story deep, deep in the back woods. There, they will find misshapen human beings, deadly cults, and unnatural forces, all of them stalking the player through the shadowy trees, dark paths, and pitch black caverns.

Pro tip: if they see you, you should run away.

It’s the chase that Outlast 2 excels at – when all of those dangerous foes are right behind the player, arms outstretched to grasp them. It’s a perfect situation to create terror, but having the player run through dark forests, twisting paths, and maze-like caves while panicked is also a recipe for video game disaster.

Getting lost, turned around, or not knowing which way to go can kill immersion and create frustration. At the same time, if the player knows where to go too easily or feels like they’re being led around, that can kill the fearful mood, too.

There is a very delicate balancing act going on behind the scenes, one that involved lots of playtesting, careful consideration of layouts, and use of sound, light, and visuals to create just the right amount of tension and direction as players run through the woods with cultists on their heels.

“There’s no magical recipe. Usually, when we as the developers feel it’s too obvious, it means it’s fine,” jokes Philippe Morin of Red Barrels, developers of the fast-paced survival horror title. 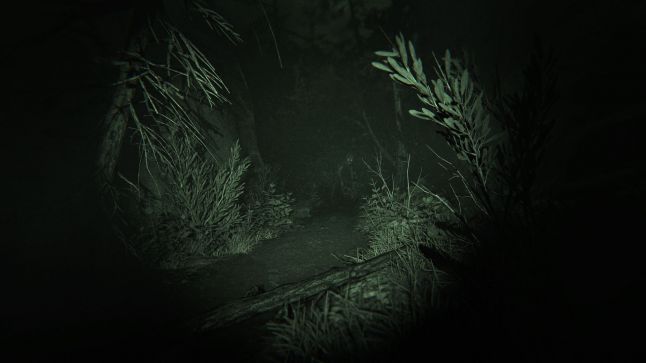 Morin’s work begins before the chase can even start, ensuring a variety of situations in order to heighten fear. “We actually try to steer away from any pattern, so players remain on edge. Sometimes it starts with a bang, and other times we progressively build it up. In other sections, it depends on how the player behaves. For example: the cornfields can actually be played without ever getting a chase.”

Certainty can lead players to feel complacent in a game’s world. Knowing that a chase sequence is coming ruins that initial shock that will carry them forward throughout the chase. Morin wanted players to be startled at times, rushing forward as a chase sequence descends on them by surprise, or because they blundered into a situation.

One key was in having no particular formula at all for how to begin. “We don’t have one magical recipe.” says Morin. Having a variety of things kick off each chase, from sudden attacks to areas of silence to places where the player instigates them, creates an uncertainty that helps enhance the fear they’re looking to create. A player who doesn’t know what is coming or what will trigger their next flight cannot mentally prepare for it. 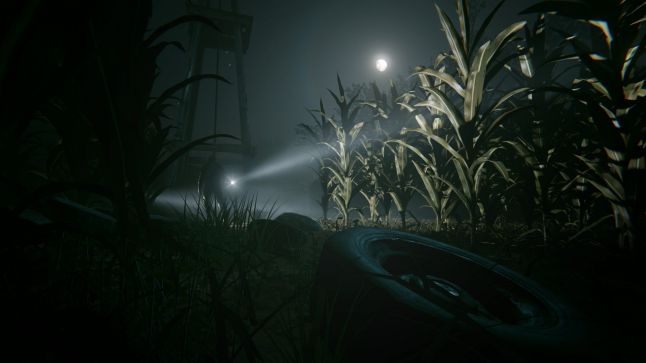 The route the players would take for their chases was the next area for Morin to focus on. Players need a place to run through, and a straight line gets dull and predictable in a hurry. Again, though, going too much in the other direction creates its own problems, with maze-like environments frustrating the player rather than frightening them. Morin needed something in between, with players able to navigate with some of the smoothness of the straight line route, but with the uncertainty and chaos of the winding route.

“We tried many things in Outlast 2, including chases in more open layouts, others in linear corridors, and it always comes down to one thing… you have to lead players without them feeling they’re being led,” says Morin. 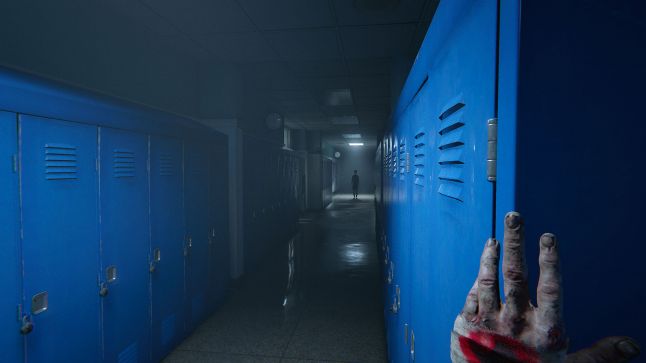 Morin used a handful of tricks to keep players on track. “The main tool is light.” he says. “People usually tend to follow the light when in doubt. Of course, it’s a lot easier to control when the game takes place inside a series of corridors, and it was quite a challenge to make it work in a forest only lit by a full moon, especially when so much of the game takes place in darkness and the level of darkness can vary a lot from one TV or monitor to another.”

Morin and the team used moonlight twinkling on a damp path, a stray lantern, or smoldering campfires in order to light up the wooded paths, facing the challenge of using light sources to lead in Outlast 2’s wide-open spaces.

Again, though, it’s never just down to one trick. “Density of objects is also something we use. Players will naturally stay away from area filled with various objects and go toward open paths. Ultimately, having enemies placed where we don’t want the player to go does also the job.” says Morin. 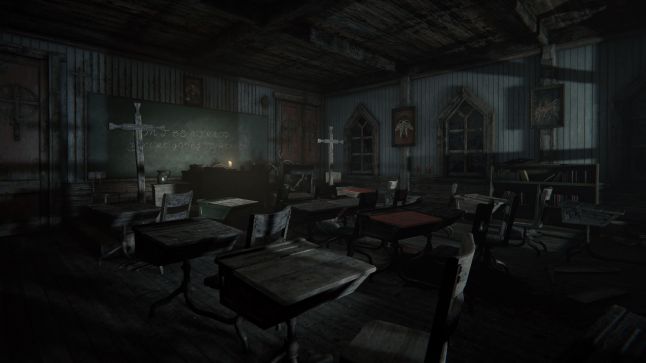 By strategically placing clutter, bushes, overturned barrels, or stray logs on a path, Morin could create a natural-looking outdoor environment while still giving the player a clear route to take while panicked. It also wouldn’t entirely look like a clear route, offering players a place that looks less like a specific course and more like a frightening camp or woods to rush through. Guided only by natural light, debris, and monster placement, Morin could set up a course that would feel realistic, yet still lead the player down the right path.

The chase itself also carried elements of unpredictability, continuing that trend of keeping the player off-guard. It wasn’t enough to keep the player running from the people they saw – not enough to feel that you’d gotten that lead on them and were safe. Even while fleeing, Red Barrel wanted players to feel unsure.

“You have to create beats. Let the player feel they’re going to be okay and then throw something at them to temporarily slow them down or completely stop them, allowing the enemies to catch up. You play with this dynamic a few times in a sequence, mix it with an effective music track, and you’ve got the basis of a cool chase.” says Morin. “It’s kind of like sex. It can’t be full throttle from start to finish, but you also don’t want the phone to ring and create that pause that breaks the mood.” 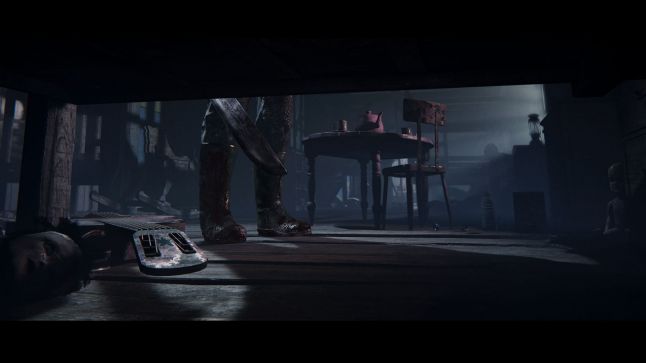 Maybe the player trips. Maybe more foes pop up down the path. Maybe an open path collapses, closing off the player’s planned escape route. Morin didn’t want any one sequence to feel predictable. There had to be something that would throw the player off of just running as fast as they could – something that added a little more to each chase.

“Of course, we have to throw in a monkey wrench once in a while, otherwise the game becomes stale. It may be the absence of chase music, the player getting injured, the introduction of a new ingredient, etc.” says Morin.

And what of those enemies that are chasing the player? If the player feels like they get a commanding lead on them, what’s to be afraid of? Morin played around with aspects of the sound design to ensure that, even if the player was far ahead, they wouldn’t feel like they were. “You have to the feel the presence of your pursuers.” says Morin. “It may mean that we have to exaggerate some sounds to hear the screaming, the footsteps, and the breathing of the enemies when we want them to be heard despite the chase music.” 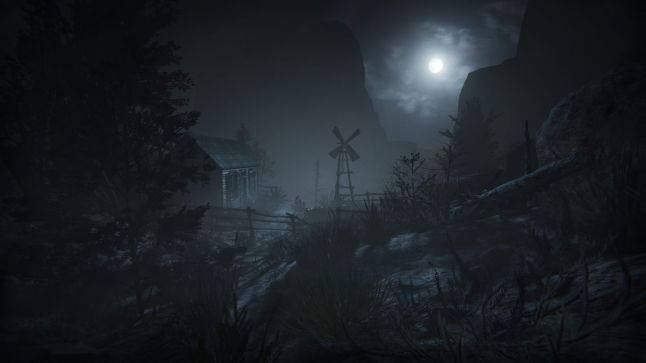 Players can hear hammering footsteps, enemies snarling and shouting, and breathing that seems to be right in their ear. Yes, the player could look behind them with a push of a button to see how close the enemies are, but they can already tell with the audio.

“Our audio mechanics are set up to use tons of information given to us by the game - player speed, NPC proximity, different AI states - that allow us to emphasize how close or how far the enemies appear to the player to create the right amount of stress no matter what the situation is.” says Morin. 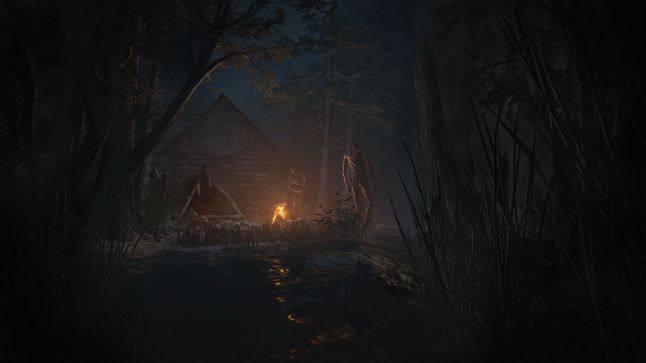 This kind of tension is exhausting, though, and can wear a player down over time. This is why a final element for Morin was in keeping these chase sequences at just the right length. They had to frighten the player without taking too long. “We also try to make sure we don’t stretch chases for too long, so players don’t become desensitized, but that part is super-tricky because it varies a lot from one player to another.” says Morin.

All of these elements went through rigorous testing, as finding the right balance of all of these things was quite tricky, bouncing between being too obvious or not clear enough.

“It has to feel chaotic, yet intuitive. It’s a tricky balance and results may vary from one player to another.” says Morin. “We’ve seen playtests in which a majority of players would go through a sequence without a hitch, while a few players would get stuck in the same area. The question becomes, ‘Can you make it work for those players without negatively impacting the experience of those who had no issues?’ When you make it too obvious, then some players start to feel they’re on a track.” 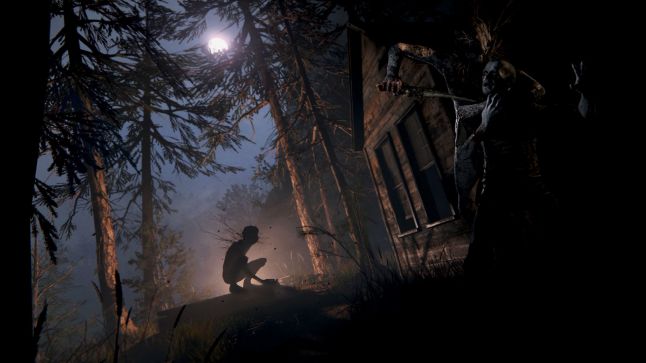 After extended testing, Morin found that they had reached that balance, getting the player ready to be chased, leading the player without making them feel lead, and then giving an unpredictable chase that made them feel afraid of the snarling at their heels. This was what made Outlast 2 special, for Morin, and what he feels players come to the series for.

“I think horror games are about the fear of the unexpected. You don’t play an Outlast game to feel empowered and in control, you play it to get a rollercoaster ride of emotions as a character who must run for his life.”