An interview with Shovel Knight composer Jake "Virt" Kaufman about both the technical aspects of the IGF Excellence in Audio finalist soundtrack's creation, as well as its inspirations.
Christian Nutt
Blogger
February 27, 2015

Shovel Knight was one of Gamasutra's best-loved games of last year, and little surprise; not only is an entertaining adventure in its own right, its attention to detail marks it as a piece of true craftsmanship. That approach has lead to its success.

One place where that commitment to craftsmanship stands out in particular is the game's soundtrack. Of a piece with the title's commitment to simulating an accurate but improved NES game experience, it's a collaboration between Mega Man composer Manami Matsumae and Jake "Virt" Kaufman -- and it pushes the adventure ever onward. It's also significant enough to make a finalist in the IGF's Excellence in Audio award.

This interview with Kaufman dives into both the technical aspects of the soundtrack's creation as well as its inspirations -- and what it meant to him to collaborate with one of the composers whose work shaped the direction his career would take.

I've been working in the industry in some capacity since around 2000, when I started scoring Game Boy Color games. One of my early favorite gigs was a little platformer called Shantae, and two (soon three!) sequels later, I'm loving life.

I've worked on about 75 games at this point, as a composer, sound designer, sometimes programmer / technical consultant, on everything from $0-budget indie games to $mega-millions triple-A titles. But the biggest breakthrough happened when I befriended the folks who went on to become Yacht Club Games, whose creative goals and styles match mine completely.

What development tools did you use to build Shovel Knight's audio?

Shovel Knight's music and sound effects were ENTIRELY made using FamiTracker (famitracker.com), a free NES music tool which looks kind of like a spreadsheet, and is heavy on hex numbers and low-level scripting.

It's a bit crazy to wrap your head around at first, but it allows me to create 100 percent authentic NES music that I can compile into machine code, and run on the actual NES/Famicom console. It gives me precise control over every single note and drum, in a way that playing a MIDI keyboard can't (and I'd know, because I use a MIDI keyboard for everything else in my daily work!)

How much time have you spent working on the game and its audio?

It was about a year -- countless overnighters and "hold all my calls" marathons. NES music is incredibly time-consuming -- the minimal sound allows no filler or shortcuts, and every single detail must be input by hand.

The Yacht Club crew are all friends of mine outside of work, so I was "in" on the game concept before it began. I am usually not involved in the development process of a game until a bit later on, but I was on the phone singing "SHO-VEL-KNIIIIIIIGHT" to (director) Sean, laughing like idiots, the night we began working on the first mock-up trailer.

How did you come up with the concept for the game, and how did that play into the creation of its audio?

I'm not sure if the Shovel Knight concept origin myth is public knowledge, but it came together in the most hilarious possible way, as most of this team's ideas do. Basically, though, as soon as I heard that you were going to play as a KNIGHT wielding a SHOVEL, ideas began flooding through my head. It needed pomp, triumphant fanfares, Mega Man, sick beats, over-the-top embellishments, heavy "orchestration."

There were almost no revisions needed, not because I'm "that good", but because we were on the same wavelength the entire time. It was one of the most enjoyable projects of my life, and easily the most difficult.

I know that getting original NES composer Minami Matsumae (Mega Man) on board was a priority, as was using the original NES sound. Can you talk about why that interested you?

Manami Matsumae still "has it" to a ridiculous degree after 25+ years, and still taught me things through her music, just like Mega Man 1 did all those years ago. She's a master and an inspiration, and enriched our lives just by signing on. We LITERALLY WEPT when we heard the first versions of her tracks.

As for the NES hardware, that's an easy one -- I've been writing NES chiptunes as a hobby for half my life -- since I was 17 -- and with the mostly-NES-faithful tech and aesthetic of the game itself, there was no way generic "8-bit-esque" music would cut it. Needed the real, raw sound of the 2A03 chip. 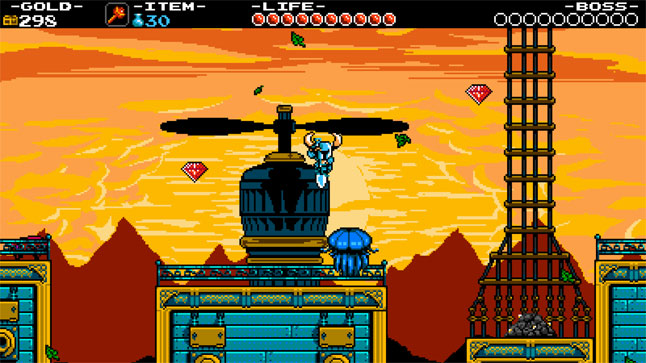 How did you exceed the bounds of that constraint?

Every song or sound effect you hear in Shovel Knight can be played back on a real hardware NES, provided you give the ENTIRE CARTRIDGE over to the music, because there's just a hideous number of tracks, and each one is super long compared to most real NES games.

Shovel Knight uses an "expansion chip" to provide extra lushness and detail in the form of extra voices of synth goodness, but that's a real thing that they actually had back in the day (it was used in the Japanese version of Castlevania III, for example.)

We also don't mute individual parts of the music to play sound effects the way a real NES would, but along with "sprite flicker", that's a limitation I'm glad to be rid of. Okay, I'm lying. It bothers me a lot. But I took one for the team.

Why do you think people have reacted so positively to the soundtrack?

I think people can identify true passion that isn't manufactured or forced, where homework was done and history was respected. We didn't try to make something completely original, we tried to make something fun, something that would speak not only to adults who grew up with NES games, but also to kids who are just now forming their own nostalgic memories. I wanted the music to be a simultaneous love-letter to the NES and an improvement upon what was possible on cartridges, just like the graphics and the gameplay. Only time will tell if we succeeded, but we sure did collectively lose a lot of sleep over it.

About one-third of them, and I'm frantically scrambling to download and try the others before GDC. 80 Days and This War of Mine are standouts to me design-wise, and specifically in audio, Ethan Carter and Thumper are amazing, and Ephemerid is actually a similar concept to an idea I've been working on for a game of my own! I hope games with narratives driven primarily by music become a "thing," and I don't just mean in the Rock Band or DDR sort of way.

We've reached the point where "games as art" are being talked about critically, and it's getting a lot of bandwidth, on even major news sites. I think that pisses off some people who want games to look and feel a certain way, to whom minimal presentations full of social commentary are pretentious and don't belong in the same space as traditional triple-A games. From my point of view, that's a good sign, because it means we're maturing and expanding the way the film industry once did, and there's room for everyone who has something to say.

The fact that you can make a hit game with cheap, simple tools means that we're going to see a lot more unconventional things being tried by people who aren't hardcore game devs. A lot more crap, too, but whatever. It's the best time in history to be making and playing games, provided we can get through the next few years without ripping each other's faces off.