Vectronom takes the player onto an ever-moving, puzzling dance floor, tasking them with navigating its shifting path to the beat of electronic tunes.
Alissa McAloon
Editor-in-Chief
February 25, 2020

Vectronom takes the player onto an ever-moving, puzzling dance floor, tasking them with navigating its shifting path to the beat of electronic tunes.

The developers behind the Excellence in Audio-nominated title spoke with Gamasutra about the process of making stages that moved to the music, how they married rhythm to gameplay in a way that guides the player, and how they picked what music felt right for the game.

Later on, we expanded the team to finish the game. Without the help of Sol Bekic (technical artist), Francesca Calderoni (project management), Remen Weustinik (3D artist), and Neysha Castritius (3D art and animation) we wouldn't have been able to finish this project.

We all studied at the Cologne Game Lab. Half of our team had different careers and vocations as musicians, audio-visual producers, and graphical artist before we did games. Vectronom is our first commercial game. 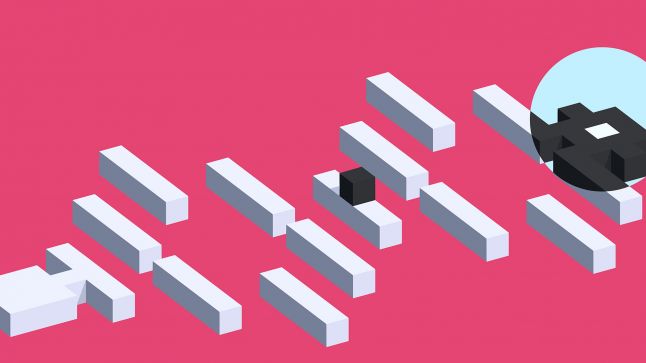 Changing to the beat

We started Vectronom for Ludum Dare 35. The core mechanic of things moving to the beat was a “one line of code” kind of feature. Initially, we made a system where the player can cycle through different level layouts by using a button. We took the button out and made it so that the layout changed once per beat. At this point we basically had the core mechanic of the game.

The game really started to shine once we realized how we could tailor-make levels and their music to fit each other. Figuring out the design principles of the game was much harder than creating the tech behind it.

On the tools used to create Vectronom

We used Unity 3D and FMOD to create Vectronom. We created a lot of our own custom tools within Unity to build the levels. We are still working on an external level editor for Vectronom, the beta version of which can be tested on Steam right now.

We wanted to experiment and make a game which required a lot of music and level design so that each of our skills would be utilized in an organic way. We were not setting out to create a rhythm/puzzle platformer from the get go. This can definitely be felt in the game. Many people only realize that they are playing a rhythm game after 15 minutes of playing. 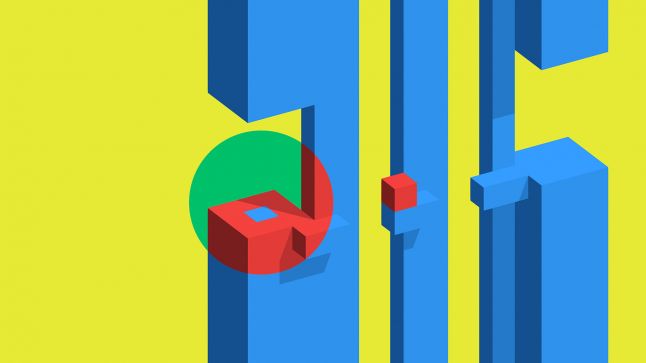 Creating a sense of flow through music

Having the music and gameplay be in sync is the central mechanic of the game. We wanted players to feel a sense of synesthesia where they don't even know if the gameplay is a manifestation of the music or vice versa. People often tap their feet or sing along while playing. It definitely induces a sense of flow and makes them feel like they are dancing.

Which music felt right for Vectronom

Short answer: Electronic dance music. Long answer: When we decided to seriously develop Vectronom from a one-song jam game to a full campaign rhythm platformer, we did some experimentation with different genres of music, from organic sounds to industrial drum and bass. This experiment revealed that the edgy and minimalistic looks of the game strongly gravitated towards synthetic upbeat sounds, heavy sidechain basses, and aggressive percussions, all ingredients of what is popularly known as EDM.

From there, we knew we wanted to have a unique sound, so we started combining relatively common electronic sounds with circuit bent toys and heavily saturated DIY synths to create more complex and aggressive layers. The result is a danceable up-tempo music that can easily blend into a club but still has a distinctive, almost plastic, sound.

We composed a unique track for each level. This was a luxury as we have an in-house composer. There was a lot which we had to learn about music and geometry to find our level design rules. We also had to create music which was easy to read and could contain a lot of spatial information. Players often told us that they felt like a hard puzzle would come intuitively to them and that they themselves didn't understand what they did to finish the puzzle. They were actually following the information laid out to them in the music. 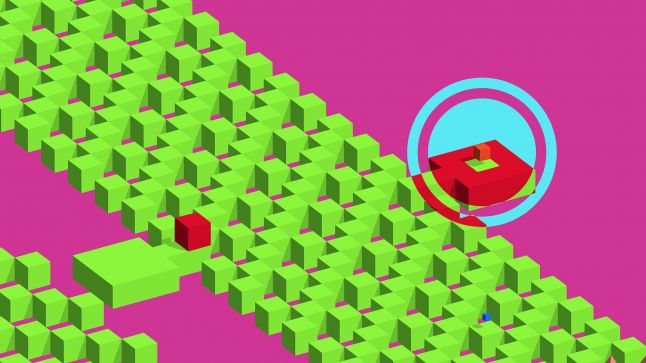 The final look of the game is pretty similar to what we had from the first day of prototyping. We decided to keep the aesthetics of the game simple because this way players wouldn't be distracted from the music and the puzzles. At some point, players just do the puzzles without really looking. We also hoped to signal to players that it's the music that they have to pay attention to by having such a simple look. We made it a priority to have the levels be easy to read at a glance. A lot of effort was put into making the colors and framing of every level just right.

Something we added to the game's visuals were the shaders which render parts of the level in a different color scheme and the animation on the player character.

The layout of Vectronom levels can change with the beat of the music. We basically create dance floors which players then have to find the right dance to. It can sometimes get challenging to navigate an isometric game, as concepts such as forwards, backwards, right and left are subjective from this perspective. But it’s also a lot of fun to walk behind things, and there were some levels which we wouldn’t have been able to make without the use of vertical space. Initially, we created more levels which played with the lack of 3D depth. We even added some code which allowed for levels which wrap into themselves like M.C. Escher paintings. We ended up moving away from this direction as we started to focus more on the rhythmic aspect of the levels.

The level designers had to learn a lot about music (and especially rhythmic structures) for this project. We start a level by looking at its constraints, like where it should be in the campaign or if it needs to teach a certain mechanic. Then, we build some puzzles to try out our ideas. At this point, we have to decide on the time signature of the music which we will compose for the level. Vectronom puzzles have to follow a rhythmic pattern; we can’t just build a fun puzzle, but we also have to make sure that it is possible to compose music to it later.

Picture of the rhythmic reference sheet we used to make puzzles: 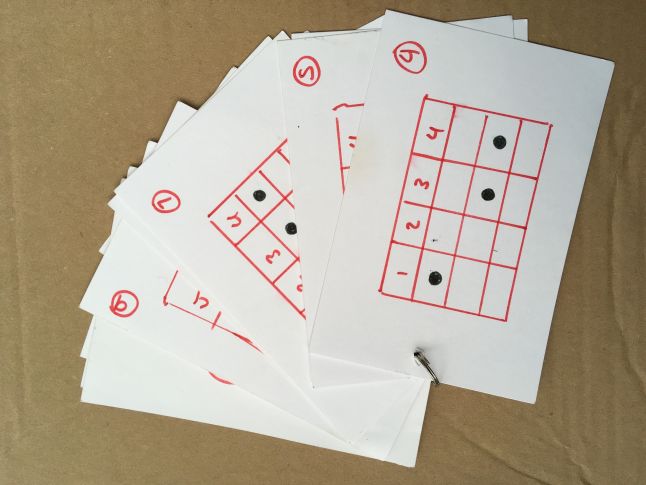 While we prototype the puzzles, we use a click track for testing. Once we have a puzzle which we think is fun, we try to break it down into three stages. Each Vectronom level has three checkpoints where the music and the puzzle changes. We try to evolve a puzzle idea over time so that the movement of a difficult section is already used in the stages preceding it. This also goes with the idea of the three stages being the beginning, middle, and end of a song.

When the first version of a level is done, we give it to our composer along with a piece of paper which explains what’s happening in the level. Here, the level designer explains which beats are important to highlight from a gameplay standpoint.

The documentation of a level for our composer: 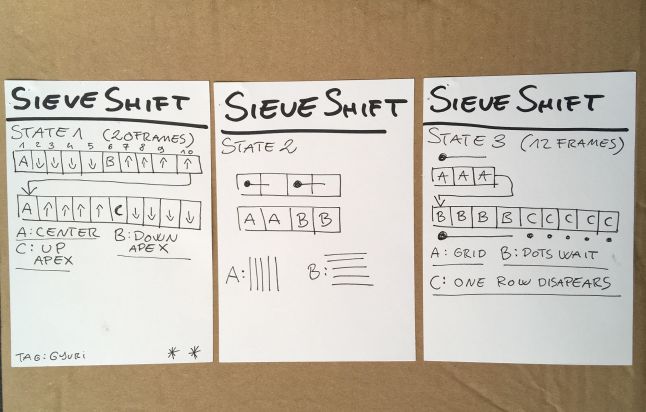 After the music is finished we still iterate on the level but we can’t change the core of the puzzle any more without also changing the music.