[This is the first of several journal entries that will cover the audio development for the game, Gathering Sky . A 'present-mortem' chronicle, if you will.]

Over the summer I crossed paths with a game in development called Gathering Sky (named Apsis at the time).. After my first play through of the game I was struck, emotionally, which is a rarity for a game that is early in development. Upon meeting the team, A Stranger Gravity, I gave them a lot of advice about the audio. At the time, they were using a collection of different royalty-free music that wasn't composed or mixed with a game in mind, and there were very few sounds in the game. Yet the experience of the game still resonated with me (I found out later that they actually designed the levels 'around' the musical pieces, reverse engineering the game to the music!) At the time, I really wanted to help them, but I was up to my eyeballs in various other game projects, and had a few other potential projects on the horizon, so it wasn't a good time for me to take it on. However, we stayed in touch, and I thought that maybe I could help them find another talented game audio colleague to help them out. 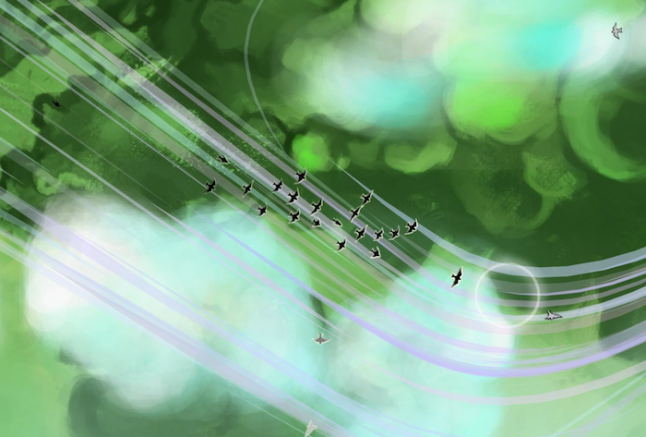 That being said, just a few short months later, all of the projects that I was "up to my eyeballs in" either got completed, or cancelled or delayed! Suddenly I had time for this project. This project with no budget. But a project that I loved. So we found a way to make it happen. If anything, this first journal entry is a lesson in keeping one's mind open to all possibilities.

I hope that this ongoing journal will maybe give some other indie teams some ideas when dealing with similar challenges (miniscule audio budgets, allowing time for audio development, live musicians, audio middleware etc). Also, in writing this journal, I hope to also solicit ideas from the community that might help us with the game along the way.

It's always great to meet up early in development and start working together with the team at an early stage to discuss game and audio design. There are wonderful examples of success in the alchemy of early creative collaboration between all teams (Portal 2, Bastion, Journey, Peggle 2), but this wasn't a luxury that we had on this project. By the time I saw the game it was at a late Alpha, maybe even early Beta build stage. I couldn't really add any ideas to the game as that would just slow down development. Not to mention, the team was leery of bringing on another personality at that point. Rightly so. They'd been working together quite well without me, and didn't want another personality showing up to disturb the balance. So it was my job to simply help them fulfill the vision that they'd already established, and I was 100% on board with that. Also, to the team's credit (who were getting close to wrapping up the game), they agreed that the audio needed some time to develop and we added 3-4 more months of development time to make some significant progress with the audio for Apsis.

The game is about growing and directing a flock of birds through the sky, and discovering the mysteries of the world that exists in the clouds. There's a wide range of emotions in the game, but one of the most prominent feelings that we discussed was the exhilaration of flying, floating and swooping around the sky. After playing around with some different musical ideas, and sound design, it felt like the the audio should be moving towards an organic tone (as opposed to a synthetic one). To me that meant using live musicians, and recording a lot of new sound design source from nature and organic objects. The latter, not being expensive. The former being a budgetary challenge, as recording live musicians, (in a game with the scope such as this one), can get pricey! More about that a bit later.

The team built Apsis with Java. A bit unusual in this era of Unity and Unreal. The team was used to building their own tools and systems for the game, but I knew that we'd probably need to find a middleware solution for the audio so they wouldn't have to build anything else. With FMOD being a free option for indies (so is Wwise, with different restrictions), it was a tool that I was familiar with and we looked into the possibilities of creating bindings between FMOD and Java. John Oliver Rogers (a member of the team) was able to find (and create) a solution for this so we were able to get started with our FMOD experiments. This started with the music system. Not to get into it too deep yet, but as the player progresses through each world, there are trigger areas setup for the music to transition. A pretty basic setup, based on areas of the map. But as I worked on the score, I'd dump the stems into FMOD, trying out different musical transitions that would trigger as the player progressed through the game. 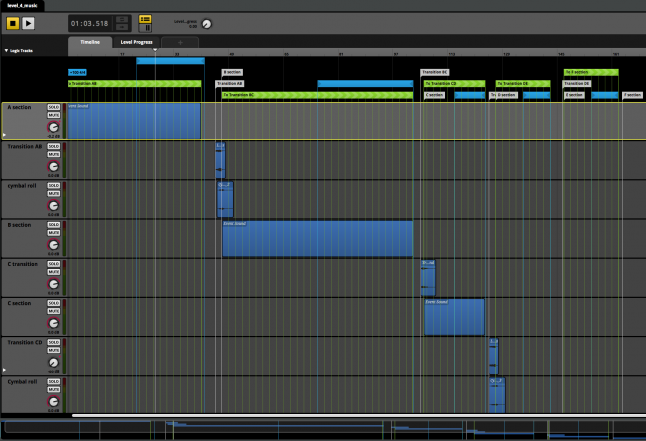 The biggest budgetary challenge so far was getting the kind of music we'd like to have in the game. Musicians cost money, as they should, and so do recording studios and audio engineers and music copyists etc. So we tossed around a few ideas until a great option presented itself (remember, keeping one's mind open to all possibilities?)

I'd recently been asked to join the board of the San Francisco Conservatory of Music in their brand new Technology and Applied Composition program. It's a new program that combines the traditional music conservatory education with technology that helps students learn audio engineering, music software, audio middleware etc. Having been close to the development of the program, I had first hand knowledge of the world class facility that they were putting together for their new recording studio. I was also well aware of the excellent musicians at the school and their wonderful sounding concert halls.

Through the Conservatory, we were able to negotiate a deal by becoming a bit of an experiment. Our project was going to be the first one to audition the new equipment and recording facility. The school also has a program that offers musicians (alumni and current enrolled students) out for hire, usually for corporate parties, weddings, and gigs of that nature. But we were going to use this service to find our musicians for the soundtrack recording. 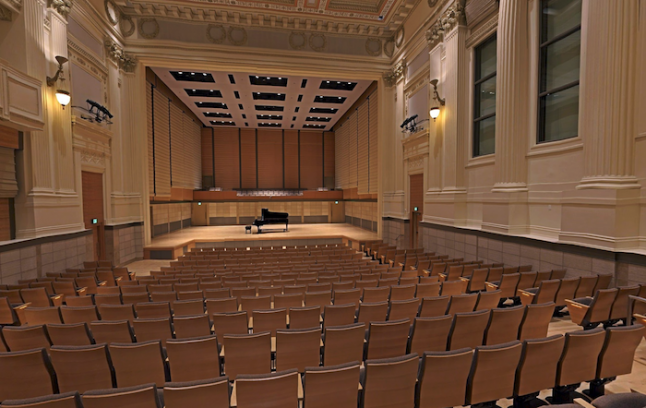 This wasn't going to be a score with a full orchestra (budget!), but a small 7 piece ensemble. Violin, viola, cello, bass clarinet, flute (including a variety of different flutes), clarinet and soprano vocals. I'll add a bit of guitar and some of my homemade instruments as well as overdubs from my home studio, where I'll also mix and implement the score. Once we worked out the budget, we had to book the time immediately and it turned out that booking a concert hall in a music conservatory can be quite a challenge.

So in November we booked 2 dates for the only time that we could get this winter, which was in early January. Much sooner than I had anticipated. This meant that I had 4-5 weeks to write the entire score (about 40-45 minutes worth or music), create several revisions, test it out with FMOD and the game build and get all of the music parts copied and ready to put in front of musicians for the recording. Actually, I had to have that all done well before the recording sessions, and before the school let out for winter break to be sure the musicians all had their music parts to practice over the break.

I did, somehow, manage to get this completed in time (with a some volunteer music copying help from friend/colleague, Richard Savery), and in the next journal I'll discuss the organization and preparation of the recording dates, maybe with a few samples, and screen shots of my recording spreadsheet and FMOD sessions.

Wrap up with a Tangent

At the risk of running off on a tangent, I'd like to take a quick leap into "the magic of embracing the unknown" or maybe a variation on "follow your bliss". I always advocate for expanding one's professional circles, which might seem obvious, but sometimes we can't see how our potential connections might work together in the future. Especially if the people we meet happen to work in an industry outside of the game industry. Keeping all possibilities open, it's all related.

I was introduced to the people at the SF Conservatory of Music through the director of a non-profit, after school music program, (Alameda Music Project). I help fundraise for AMP through the sales of The String Arcade. SFCM and I worked together trying to help AMP raise more funds, and we eventually became friends. As they started to put their new program together at SFCM, I tried to help them wherever I could through my contacts in game audio and the music industry. We built a great relationship, and when this project came up in casual conversations, it became an obvious decision to work together on the soundtrack. This is an option that would not have existed had I not been interested in helping the non-profit music program, or in having enthusiasm for the new program's development at SFCM. I think that these little 'coincidences' are just as important to note as the 'nuts and bolts' stuff in any creative endeavor...hopefully we capture a little of this magic at our recording sessions next week.