Audio Design Deep Dive: Using a human skull to create the sounds of Inside

The composer & sound designer on Playdead's Inside takes us on a deep dive into why and how he used a human skull to create the unique aural soundscape of this atmospheric puzzle game.
Phill Cameron
Blogger
October 06, 2016

This Audio Design Deep Dive is a fresh, game audio-focused spin on Gamasutra's popular Game Design Deep Dive series, which aims to shed light on specific features or mechanics within a video game in order to show how seemingly simple, fundamental design decisions aren't really that simple at all.

If you enjoy this sort of focused look at the nuts and bolts of game development, check out earlier installments on design of the action-based RPG battle systems in Undertale, traffic systems of Cities: Skylines, and the plant-growing mechanics of Grow Home.

Also, dig into our ever-growing Deep Dive archive for developer-minded features on everything from Amnesia's sanity meter to the power-ups of Lovers In A Dangerous Spacetime.

I’m Martin Stig Andersen and I worked as a composer and sound designer on Inside. I was the audio director as well, and I did have people helping me, but it was pretty hands-on.

So I went to London to study electroacoustic composition, which is really about taking everyday sounds, like the sounds of traffic, and then taking that back to the studio and extracting musical material from it. This approach led me into working with sound design as well.

What: Creating the soundscape of Playdead’s Inside with the help of a human skull

Early on, as we were working on Inside, I had the idea of working with a human skull because I think it's very interesting how the sound of your own voice sounds very different in your own head.

People are often shocked when they hear themselves recorded, because things sound totally different inside your head. Things sound much softer in there, more full, in a way. This is because a large part of what you hear is your voice resonating inside your body, in your jawbone for example. Try blocking your ears while you speak or sing; that’s the sound I’m talking about.

So I had the basic idea of trying to recreate sounds as they would sound if they were happening inside your head. That was the curious thought that led me to acquire a human skull and experiment with it.

In the end, the sounds I played through the skull were actually synthesized sounds, which I usually don't do a lot -- most of the work I do is done by going and recording things with a microphone. But for Inside, I think because of the game's aesthetics, I kind of felt it should be associated with '80s B-movie soundtracks -- cheap yet cool soundtracks.

But at the same time I didn't really want to hear synth music in the game. I tried to do it, but it felt too much like a statement -- like we wanted express something by subscribing to a specific genre. I don't think that's appropriate for a game like Inside, a small game that's all about creating its own unique world. 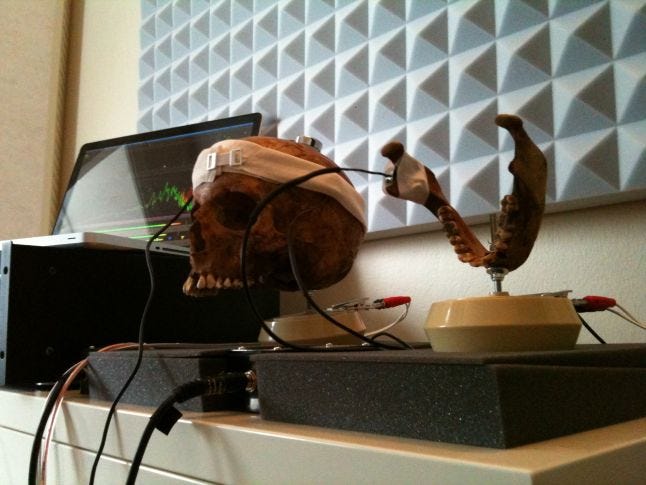 But when I played them through a skull, the sounds acquired another quality. I did some post-processing as well, of course, but even without it you can hear this kind of timbre, which inspire a very nuanced association with a synth soundtrack. Many of the sounds that I processed was created by my co-composer on Inside, SØS Gunver Ryberg. During the development we acquired an intuition for what kind of soundscapes resonated well within the skull.

The end result, after the post-processing, is generally a bit creepy and cold. The sound has almost a chill about it. Eventually all the teeth fell out of the skull because of the vibrations, but while they were still there they created this small vibrating sound that I think was unsettling but also strangely familiar to people. Because we all know it, in a way.

The same track, after being run through the skull and processed

Of course, it was a bit tricky to work with the skull. I had to try many different contact microphones before I found one that worked well. But really the biggest challenge was that, when you transform sounds through an object like this, they come out initially sounding quite bad. So I had to do some amount of post-processing afterwards in order to make the sounds listenable. 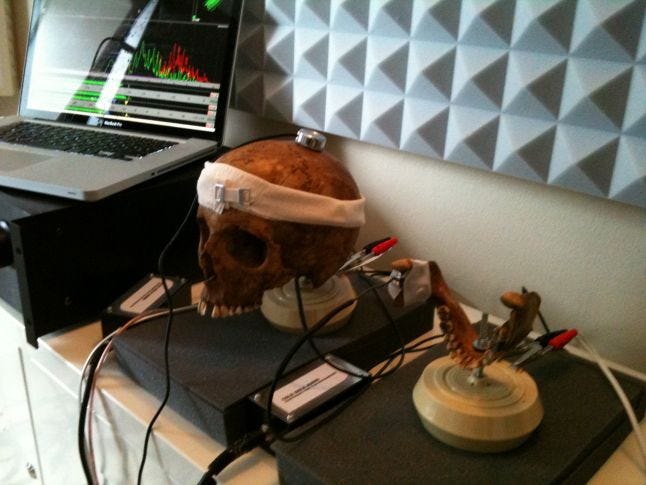 But I stuck with it because the skull works like a unique filter. It gives our sounds an iconic signature, boosting certain frequencies and dipping others. I really liked the way frequencies shifted when we played sound through the skull, even though they needed some post-processing afterwards. I also think that taking such a detour is often necessary in order to obtain something unique, and ruining sounds only to restore them again are steps I often take to create something that sounds a little different.

Every time I start on a new project I really want to find some kind of distinctive, original sound. Not like a musical style, but more like a sound quality that you can associate with that project. I think it helps to create a sort of holistic, whole experience.

I’m very happy with the results of working with a human skull, even though I don't expect to use this again. Usually with specific elements like this, I prefer to move on to the next thing; the use of the skull helped define the sonic quality of Inside, and now I think it will remain on the shelf of my studio for the foreseeable future.

This is a good example of how I have learned to work with sound: to take something and not have too many expectations about what I will achieve with it. At the same time, I try to stay open to see what a given object can bring me, what the good and bad things are about it. It gives me something as well -- the right object can change my direction on a project. So I guess what I learn from working with objects like this skull is to remain open to experimenting, and to listening to what a given object can do to sound.

In the future I'd like to work with the tools of electronic surveillance, like highly-directed microphones and things like that. I think that could be very fun to work with.