More than a thousand words: Integrating story into art

Sponsored: 1518's Michael Casalino explains how artwork can be used to enhance a game's storytelling.
by PTW
September 20, 2021

Navigating the world of outsourced art can be tricky, which is why 1518 always offers free consultations. Learn more here.

Storytelling isn’t just about dialogue. Text might be the most explicit and direct way to convey a message, but it’s only part of the bigger picture. Video games operate in much the same way that movies and tv shows do; they all employ a variety of elements to evoke thoughts and emotions from the audience. The very best stories underscore their meaning with their visuals.

We all understand this on an instinctual level, regardless of our direct experience. Regular consumption of media trains us to respond to light and color, even when we’re not conscious of it. Darkness, shadows, a bluish palette, these traits immediately trigger an apprehensive mood. Conversely, light and bright colors evoke happiness and positivity. That’s a simplistic summation, but in general, it’s clear that a visual artist can manipulate feelings using art alone.

However, the relationship between emotion and art is more complex than that. We’re all products of our personal histories, with a huge range of experiences that inform our relationship to specific images. A picture of a teacup might be emotionally neutral to one person, yet it might have intense meaning for someone else. So how can we use art to tell the kinds of stories that have meaning to everyone? We turned to 1518’s Chief Creative Officer, Michael Casalino, for his insight.

Michael says the first step in creating visuals of any kind is to understand the backstory and lore of the game first. The elements that make up the setting inform the visual palette that the artists can use to create the game with. When does this story happen? Is it our current time, a historical piece, or a future event? In what location does it occur? Are we in an urban environment or a wilderness? Is it a war-torn battlefield, an idyllic, mountainside retreat, or a small, poverty-ravaged village? Locking this aesthetic down is key to building the visuals, as artists will know what their boundaries are, and thus won’t waste time creating things outside the target milieu. Concretizing these details lets the player know what kind of story they might get.

The storytelling progresses with each item the artists create, from the environment to characters to objects. It’s easy to forget that, unlike a movie or tv show, every onscreen element must be created by an artist. There are no pre-built worlds for someone to just drop a camera into and start recording. As such, it’s the Director’s job to guide the visuals with the vision of what their game world should look like.

For example, if the action takes place in a house, important considerations might be: what era was this house constructed in? What design aesthetic went into its décor? Is this house new or has it been standing for a long time? Without a single line of dialogue, the player will unconsciously infer a number of things about the world, and this will help convey the story.

Michael relates the idea of the player happening upon a staircase with a handrail. While it might seem like a trivial element to place any time into if it doesn’t directly affect the action mechanics of the game, it is still a part of the overarching story of the world. The handrail might be worn smooth in places, an indication of both its age and that it has supported countless hands running over its surface. Noticed consciously or not, it still adds to the ambience of the scene and helps ground the reality of the game.

Another great example is an area of concrete on which drops of water have been falling from a leaking roof: that spot would be worn away, attesting to the repeated impacts of the water over time. Such a detail would enhance the idea of the used nature of the place, and maybe give a hint of disrepair, adding to an overall mood of waste. As Michael tells his artists, “Everything you touch, build a story around it.” 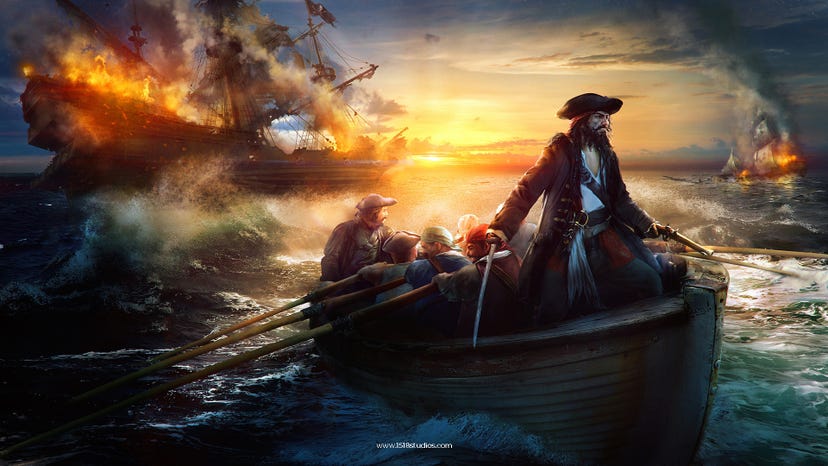 Michael also brings up an intriguing idea. Details give players agency to almost co-create the stories of the game. Take, for instance, a player character wearing combat armor and uniform. The artist might build the model such that there are rips along one side of a pants leg, or a handwritten slogan on the helmet, or even some kind of tchotchke hanging from the barrel of their weapon. Without explicitly stating the origin of these little details, the player is free to fill in the backstory that led to their inclusion.

In turn, this makes the player feel a kinship with the character, which helps the bonding process. The player is more likely to be invested in the story and want to keep playing to find out how it all turns out. An element of mystery goes a long way toward building immersion. In fact, this imaginative partnership persists past the events of the actual game, leading players to create their own stories featuring their favorite characters well outside the bounds of the game itself. A nice feedback loop is created, which virtually ensures players keep coming back to play sequels.

Another way art creates narrative is through animation. Alongside the main thrust of the story with its attendant dialogue, there are hundreds of what you might call ‘microstories’: tiny tales that begin and end with a single action. For example, a futuristic, science fiction universe might appear pristine and almost antiseptic, like the Star Trek aesthetic. But how does it stay that way? Michael brainstormed a scene in which someone accidentally takes a chip out of a nearby wall. Immediately, a small robot appears to instantly replace the chip, fixing the blemish, leaving no trace that anything had ever happened.

That one simple action reveals an entire process that had heretofore been hidden, and not even thought about. But when something happens that opens up an entire new world of inquiry, the storytelling becomes deeper, taking on a new depth. It makes players wonder what else might happen. What other mini-stories are possible in a world that can support the one that had just occurred? What kinds of little stories can be told in the background of the main action?

Finally, we have another form of implicit storytelling in the very silhouettes of a game’s characters. Michael tells us that his artists consider the idea of ‘shape language’ when creating a character. If you take away interior detail, what does the outline of a character tell you about it? Thick limbs, a blocky head, a squarish body overall… does it make you think of strength? What about a smaller, roundish figure? Or a tall, slender one? What associations pop up?

Even better, these built-in associations can be used to play against type, creating a memorable character. What if your basic brute was actually a coward? What if that graceful, slender shape housed an authoritarian? Playing with an audience’s preconceived notions is an excellent way to build characters that stick with you, and further open up the range of what’s possible in storytelling.

We all absorb story almost unconsciously and a game’s visuals play a huge part in that. The next time you’re in a session with your favorite game, take a moment to examine how the graphical elements are making you feel and think. A thousand individual choices went into their construction, and your appreciation can only deepen upon reflection.