Have a look at Nintendo's early prototype for Yoshi

A recent Nintendo dev interview also included a screenshot [excerpted below] of a prototype Yoshi sprite, dated November of 1989, in which the iconic dinosaur looks more like a sad turtle.
Alex Wawro
Blogger
September 28, 2017

Nine years after introducing the world to Mario (under the guise of "Jumpman") in Donkey Kong, Nintendo created a companion for him: Super Mario World's Yoshi. But where did Yoshi come from?

According to excerpts translated by Kotaku of a new Nintendo [Japanese] interview with devs who worked on Super Mario World and Yoshi's Island, Yoshi was inspired by an image of Mario riding a horse that Mario creator Shigeru Miyamoto drew in the '80s.

(The interview also included a screenshot [excerpted below] of a prototype Yoshi sprite, dated November of 1989, in which the iconic dinosaur looks more like a sad turtle.)

"When we were making [Super Mario Bros. 3], he drew a picture of Mario riding a horse and had put it up on wall next to where he sits. When I saw that, I thought, ‘I guess he wants Mario to ride something,'" Super Mario World director (and fellow Nintendo vet) Takashi Tezuka reportedly said. "So, when we were making Super Mario World, we had this ‘dinosaur land’ concept, and I had [Shigefumi] Hino draw reptile type art.”

However, it sounds like one of Hino's first attempts came out looking more like a crocodile than everyone was comfortable with. Tezuka reportedly felt that was maybe a little too reptile-y, and sketched a cuter dinosaur-like creature that became the basis for the Yoshi that appeared in Super Mario World.

And of course, according to a company character guide published in '93 and publicized by Console Wars author Blake Harris in 2014, Yoshi's full name isn't Yoshi: it's T. Yoshisaur Munchakoopas. 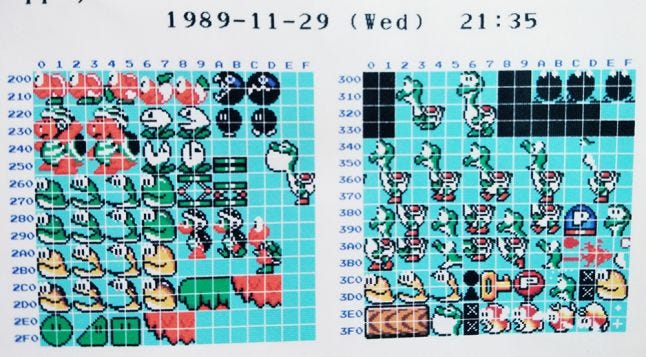