Every Picture Tells A Story

In this bonus art feature, published onto Intel's Visual Computing section, veteran Steve Theodore looks at how, visually, "although game technology seems to be at the height of information age modernity, the basic challenges of the working artist never really change."
Steve Theodore
Blogger
June 04, 2009

[In this bonus art feature, published onto Intel's Visual Computing section and originally created for Game Developer magazine, veteran Steve Theodore looks at how, visually, "although game technology seems to be at the height of information age modernity, the basic challenges of the working artist never really change."]

We geeks of a certain age experienced a little thrill of nostalgia during the blizzard of pre-Halo 3 marketing.

For most industry folks, the commercials featuring Stan Winston's mammoth "Believe" diorama were an intellectual exercise: a chance to speculate about the end of the trilogy, to nitpick about the details of the beautifully executed handbuilt models, or to debate the marketing merits of the ad campaign. (See Figure 1.) 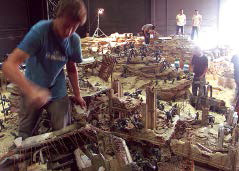 For the more retro among us, though, the mockumentary footage showing the painstaking modeling work resurrected some pungent memories, the lemony smell of polystyrene glue, the slimy slide of water-release decals, and the tedium of filing mold-marks off of various Panzer sprockets and Mustang manifolds.

The plastic modeling scene of 25 years ago might seem irrelevant to a magazine that specializes in whiz-bang next-gen game graphics. The technical challenges of modeling in plastic and in polygons are completely different, but the artistic demands of level design and asset modeling are actually quite similar to those facing diorama builders and other real-world model-makers, like effects houses and set dressers.

Physical and digital modelers both need to engage their audience in ways that differ from most of the other arts. Temporal media like animation or comics tell stories by controlling the audience's experience of time and sequence.

Traditional graphic arts like painting and illustration set the stage with a 2D composition that guides the eye and shapes the viewer's sense of occasion. Physical and virtual modelers, however, must both cope with a viewer who can inspect the finished piece from any angle or distance.

Of all the disciplines, modelers face the toughest challenge in reaching the audience emotionally. Just as animators still find value in the works of Seamus Culhane or Preston Blair (even if they've thrown away their pegboards), modelers should ponder the lesson of the pioneering modelers of the 1970s and 80s, artists like diorama builder Shep Paine, miniaturist Bill Horan, or ILM's Lorne Peterson -- even if we never need to know the right way to vacuum-form a new Messerschmitt canopy or how to unblock a dodgy airbrush.

The central task of any modeler, physical or virtual, is to give a static object or scene enough life that it can reach the audience emotionally without the kind of framing devices that other media have. Most of us deal with subjects that are basically anonymous: mass-produced vehicles, manufactured goods, generic architectural spaces.

Only a fraction of our work is devoted to unique capstone designs that are strong enough to capture the imagination based on design alone. For every Death Star or TIE Fighter there are miles of faceless corridors, inevitable period vehicles, and necessary but uninteresting bric-a-brac.

Even if I'm lucky enough to work on a strong, unique design, how can I anchor that design in physical reality for the players? Those questions would be equally familiar to earlier generations of model builders.

Real-world modelers and scenarists try to compel the audience by presenting objects or spaces as slices of living history, not static images. By now most game artists have learned the obvious truth that the world isn't factory fresh, and most modelers today add a dash of noise or a bit of wear as a matter of course.

The classic models of artists like Paine and Francois Verlinden, or the miniature work in the pre-CG era Star Wars films, take this principle several steps further. They are built around details that can turn an empty room or a simple object into something like a character with a past and a distinct personality.

Great models never let the viewer forget that every object or scene had a past that made it different from all the others of its kind. Whether it's a lucky pet name chalked on a tank turret, some jerry-rigged repairs on the Millennium Falcon, or just the litter of paperwork and coffee cups on a desk, classic modelers always remind the viewer that what they see is a moment in an ongoing story -- not just a tank, a spaceship, or an office.

Shep Paine's famous Monogram diorama series is a great example of how details can be chosen to create miniature narratives. The B-17 kit (see Figure 2) in particular, shows storytelling and modeling welded together into a single process. The diorama centers on a crashed bomber, a subject that could easily find a home in many game settings. 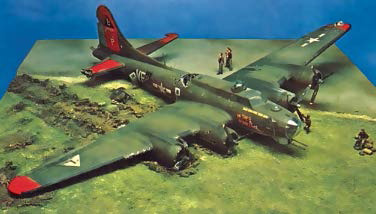 Figure 2: Shep Paine’s Monogram B-17 diorama is a study in the art of bringing backstory and personality to a static model.

The execution, though, shows how the artist's careful thought has transformed a simple premise into a unique form. Rather than simply layering on scorch marks and gibs, Paine has imagined the entire crash sequence: flak over the target, a limping flight home, the failure of the plane's landing gear (see Figure 3), and a final skid off the runway into the muddy verge of the landing field. 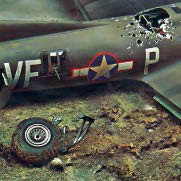 Figure 3: The key to diorama is the artist’s thorough conception of the events leading up to the crash. Here the bent and twisted landing gear, the torn control surfaces and the scarred landing field all help convey a complete narrative in a single moment.

That story drives the details of the final model. Everything, from the streaks of oil smoke on the wings to the way the propellers were bent back asymmetrically by the climactic belly flop, helps support the background story.

Instead of a forgettable icon that simply checks the "plane crash" checkbox, the imagined scene invites the viewer to envision the off-screen drama, as well as appreciate the final result. The viewer doesn't need to decipher the details of the story correctly to be affected by it.

The logic of the imagined events gives the whole model an artistic unity and authentic presence that a random collection of brownouts and debris could not.

An example of the same principle rendered in up-to-the-minute shader 3.0 glory, is the artwork in 2K's BioShock. The drowned city of Rapture abounds in wellchosen narrative details, even aside from the important set pieces, which are important to driving the game's complex interwoven stories. Many of the stories are played out in very literal ways for macabre effect, bodies hung from meathooks, stores looted, and so on.

But what really helps sell Rapture's unique feel are the hundreds of tiny stories scattered throughout the city. Even in out of the way corners, you'll find small stories that illustrate how or why the utopia failed: a barricaded spare room with a filthy mattress, a few bottles of booze, a couple of books; a policeman's office, buried under piles of paperwork from toppled book shelves; the wreckage of a garden party in Arcadia, complete with empty champagne bottles and an overturned tea table.

Perhaps the way the city itself is being destroyed by internecine warfare and the encroaching sea is the inspiration for the use of narrative details. Whatever the reason, the overall effect is compellingly immersive in ways few games can match.

There's an obvious cost to thinking about every modeling task or environment as a story. Inevitably, relying on shorthand symbolism is easier and quicker than imagining an entire history behind every poly and pixel.

The time differential may be a lot less than it seems. The actual amount of detail necessary to sell a story can be quite minimal. The mental effort, on the other hand, is considerable.

Artists who like to wade right into a project and start laying down polys will find it uncomfortable to put the building on hold while they ponder a bit of backstory.

If the task seems daunting, though, it's worth remembering that the modeler or level designer doesn't suddenly have to become a screenwriter to make use of narrative detail. The stories don't need to have a lot of depth or character development; they simply need to respect and reward the player's latent powers of observation.

There is one practical drawback to focusing on narrative details. The essential point of a storytelling approach to modeling is to emphasize the individual history -- the "personality" -- of the subject.

In games, unfortunately, we have to manage scarce runtime resources, and many of the assets we create have to be reused. The convincing detail that turns a model into a uniquely believable object can backfire when it shows up again and again.

Asset modelers will have to plan carefully how to avoid undermining their own efforts through repetition. Even environment artists will find that key details will repeat, whether common elements like doors and fixtures or, more often, textures. Balancing the need for reusability with the power of hand-crafted individualizing detail is a tough trick.

One common strategy is to build both individualized and generic versions of the same asset. For example, if you have a lot of stop signs in your city, you'll probably need to reuse them often.

But if the mix is leavened with a couple of variants, such as a bent stem from being hit by a car or a vandalized version with a "'Stop' Eating Animals" sticker, the monotony is relieved and even the generic variants gain a touch of extra depth.

Ideally, the variants can share geometry or texture work with the generic versions so that the resource costs of the whole package aren't overwhelming. Designing assets from the outset so they support cheap color variations, part swaps, and decaling makes life much easier as you balance unique details with unobtrusive generics.

Rigging assets for animation and then "re-posing" them to build variants cheaply is another good investment. Naturally, of course, the amount of energy you'll put into individualizing assets will scale with their relative importance.

You probably want the details of the heroine's car to tell the player something about her and her history, but you probably don't want to spend too much time on the life and times of her toaster oven.

Figure 4: This 4,000 year old Egyptian diorama displays many of the artistic techniques a modern environment artist or modeler would recognize.

Although game technology seems to be at the height of information age modernity, the basic challenges of the working artist never really change. Learning some tactics from real-world modelers isn't an unreasonable stretch for the modern pixel pusher.

We're the latest generation in a line of modelers that goes back at least to the days of the Egyptian Pharaohs, who passed into the next world accompanied by detailed hand-carved dioramas of daily life in this one.

The 4,000-year old diorama in Figure 4, despite its simple execution, still conveys startling immediacy. You can almost hear the commotion and smell the sawdust in the crowded carpenter's workshop.

Though we work in ways that anonymous 11th dynasty craftsman never dreamed of, we're still hoping to achieve the same things. Let's hope we do an equally good job.

[EDITOR'S NOTE: This article was independently published by Gamasutra's editors, since it was deemed of value to the community. Its publishing has been made possible by Intel, as a platform and vendor-agnostic part of Intel's Visual Computing microsite.]