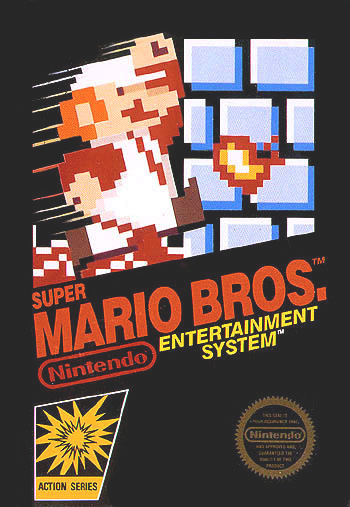 Super Mario Bros. by Nintendo, released originally back in 1985 on the Famicom and in the arcades, and launching in the West with the NES in 86/87.

Forgive my absence - E3 was last week, and I was there every day (and night) and those of you who know what that means, understand how all-consuming that can be. Enough with the apologies - for today's retrogame, we are gonna go way back, to what was for many the beginning of their experience with videogaming. 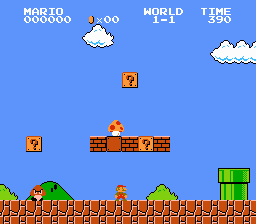 My experience with Mario was an odd one. I enjoyed the original Donkey Kong games, and the arcade Mario Bros. game, while colorful, didn't really appeal to me. When I picked up my NES, I had the Deluxe Set (spoiled kid that I was) and Gyromite and Duck Hunt were the first game paks that I laid my eyes on. No one else that I knew had (or cared about) NES at the time, so Mario was still a mystery. Some months after I got my NES, we were at child world and I decided to pick up a new game for my new console (which I'd already become kind of bored with). Clu Clu Land... nah. Chubby Cherub? No, no way. Excitebike looks neat but.. the guy is orange. Super Mario Bros.... huh? While, it says "Super.." 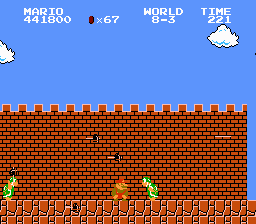 We brought the game home, I plugged in and gave it a whirl. I lost the instruction booklet under the carseat on the ride home, so really no idea what I was going to be in for. That's how it was in those days, you'd buy a game rather arbitrarily and just go! Anyway, I played the game and got instantly sucked in. Never before had a game world felt so animated, so compelling. The graphics were varied and colorful, the music was bouncy and friendly. The enemies were inspired and engaging - and there was just so much to do. But, something was missing.. this game was pretty tough, and I couldn't get really far. I would run and jump, run and dodge, but things kept killing me. It got frustrating and my interest waned. 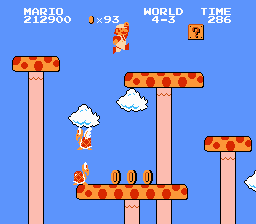 One day, some weeks after buying the game, the system was on and I let it sit, and the attract mode began (it was bizarre enough to see an attract mode in a home game, but never mind that). Mario ran away from the title logo, hit that question block and a mushroom popped up. To my astonishment he grabbed the mushroom (rather than dodged it, as I always did) and he doubled in size! And started smashing bricks! I looked on in wonder, feeling like an idiot for not realizing this whole element of the game's mechanic. I'd had the game for weeks, but had no notion that you could power-up (after all, the "good mushroom" and the "bad mushroom" looked suspiciously similar). It sounds silly to say now, but this was really a revolutionary concept at the time, and my mind was absolutely blown. I picked up the controller and got to mowing through the game..

Over time, a couple other kids finally turned onto the world of NES and Mario and we started trying to compete to see who could clear the game first. All those castles, the swimming levels, the beanstalks, coin rooms, Latiku in that damned smiling cloud, the dreaded Hammer Bros. And of course, the very end of the game throws a curveball at you with the "endless maze" which you must run through in proper order to defeat the pattern. All in all, a class act all the way through and truly one of the most universal defining moments in any videogame player's history.