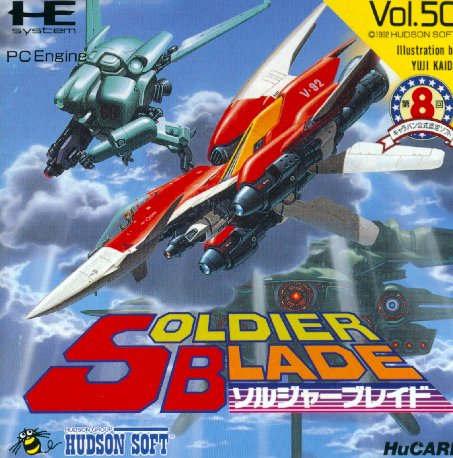 Soldier Blade by Hudson Soft, released in 1992 for the TurboGrafx-16. And YES I know there are certain folks among you who curse me every time I don't just call it "PC-Engine."

TurboGrafx-16, Sega Genesis.. they were the earlier twins of the 16-bit era, before the SNES burst onto the scene and showed everybody up. And with their dominance, a whole slew of "space shooter" titles blanketed the landscape of Videogameland. Both machines were fairly ace at presenting this game style, with colorful graphics and enhanced sprite capabilities, compared to the preceding 8-bit generation, where shooters were occasional but often too demanding for such limited hardware.

Thus, Soldier Blade was birthed. Following quite a legacy (the original Star Soldier from several years prior, and it's francise) the series morphed after hugely positive reception to Compile's Gunhed/Blazing Lazers, a staple of the TG-16 launch lineup here in the West and a game which helped usher in the era of "high-octane shooters." Essentially, Soldier Blade followed the Blazing Lazers formula rather closely (perhaps too much so).

And so we have a beautiful, fast-moving game, very easy to pick-up-and-play. Soldier Blade is one of the more loved "shmups" out there, although honestly it is a bit too knock-off to feel so deserving of the praise it receives.

Regardless, the game plays by the well-established rules and throw some nice sights and sounds at the player, with the usual assortment of Boss Threats each gunning for a chance to take you down. The pace of the game is as relentless as you'd expect, and though the game is not going to make yo cry, it will still give any gamer a fair amount of challenge.

Looking at the huge back-catalog of shooters available, it is hard to recommend that Soldier Blade be worth investigation. It's a solid game, well assembled and pretty to look at, and it does it's "color by number" shtick quite well - anyone casually seeking a burst of 16-bit shooter nostalgia will absolutely feel right at home with this title. For the more experienced gamer, I'd recommend they pass on by and dig their thumbs into something a little more challenging or novel, however.