Retro Game of the Day! Side Arms 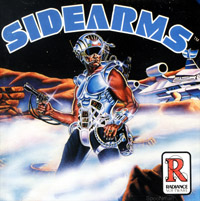 Yep! It is another outerspace shooter. Okay, so maybe I didn't play to many RPGs or Sports titles as a kid - don't worry, we will get to more of those in the future. The 1980s and 90s were pretty cluttered up with this stuff - and there was no shortage of them from Capcom, certainly.

Side Arms was part of a "semi-series" (unnofficial, not connected by name) of shooters of "a guy flying through space instead of a straight-up spaceship" that Capcom was known for producing back in the day. In fact I can't think of any proper Gradius-style games they've ever released, can anyone enlighten me?

Following on the heels of Section Z (another "robot guy flying in space") and in a similar era as the ("unconnected") Legendary Wings, Side Arms felt like a distinctive mashup of the former and top-down historical-themed blaster 1943: The Battle of Midway. The powerups all seemed very familiar (the giant "POW" that you could pick up, and blast across the screen, the general art style and aesthetic, despite the completely different theme) and compared to their predecessors, the arsenal available to the player in this game was much more souped-up/impressive compare to what Capcom had put out there before. Side Arms lived up to its title, this game was all about blasting. 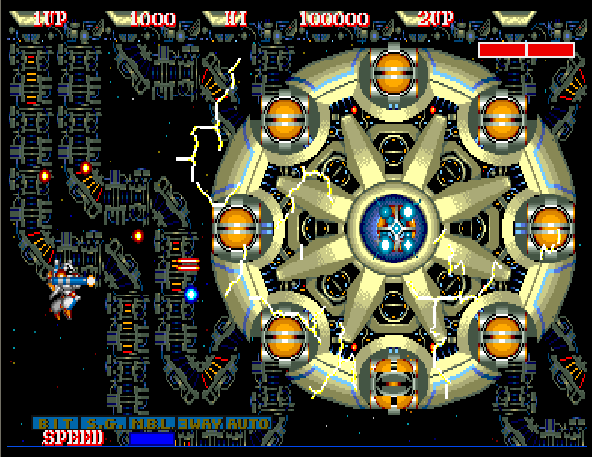 Of course compared to its brethren, Side Arms had a few distinctive things going for it. Number One was it was much more conventional at the time; very straightforward levels, large graphically impressive bosses awaiting you at each round's end. And Two, this was a 2-Player affair, like the contemporary Wings. Unlike that game, when a special powerup was collected the two-players could merge together into a "super warrior" (awkwardly controllable by both players!) with a very increased multi-directional shot. It was strange at the time, but different and therefore kind of cool.

Side Arms gave way to Forgotten Worlds, ultimately, which was the cream of the crop of this type of game - we will review it someday! In the meantime this is a good, if somewhat average, period shooter to take out for a spin. Strangely, it never appeared on any main console other than the TurboGrafx-16 (and even then, I believe it was only a single-player port - I am not sure of that, however).