Retro Game of the Day! Renegade 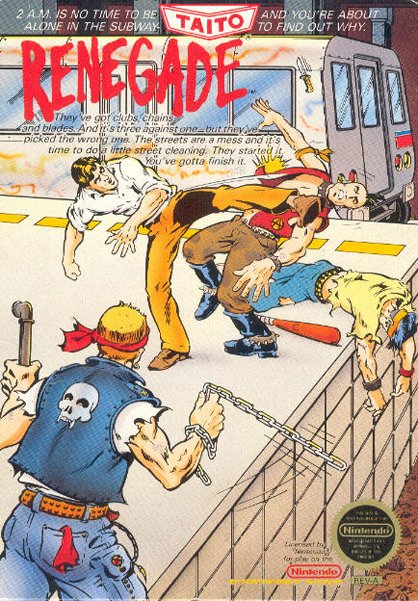 Renegade by Technos, published in the West by Taito. Arcade release 1986, NES port in 1987. 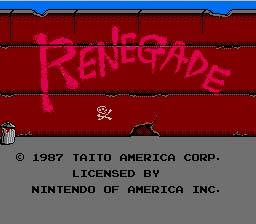 Renegade! One of the most important games ever developed, though nobody really even remembers or talks about it. That's a shame, because this is the direct predecessor to the game which "broke" the beat'em-up genre, Double Dragon (same developer, very easy to trace the gameplay and aesthetic between the two). And of course from there you had your Final Fight and TMNT games which directly evolved from that. It's not so direct a descendent, but it would't be wrong to say that the Street Fighter games owed some of their history to what Renegade started as well. 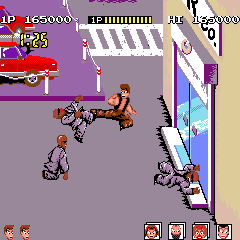 So why all the fuss then? Fighting games weren't new, true - but never before had the formula worked like this. Each level was often a contained area, stretching a couple of screens long (like a boxing ring). Your character and his foes all had hit points, and simple punch and kick attacks (you could execute a couple of other moves as well). Rather than so many games which concentrated on side-scrolling fare or 1-on-1 battles, this was truly the first notable "you vs groups of enemies" games which could come to epitomize the beat'em-up genre. Polish off the enemies, take down the boss, and advance to the next level.

The game seems extremely primitive by modern standard, with its limited color palette, spartan environments, and goofy soundtrack, but when it was new the game was quite a blast to play through. No longer were enemies merely mindless drones advancing on you one by one, from some fixed placement; now they were each fleshed-out characters living in the game world, stalking you, ganging up on you. Each stage felt tense, realistic even, especially when considered in contrast to the other fare going on in arcades at the time (space shooters, cartoony platformers). This game was bold, dark, and violent, and gamers could relate to it. 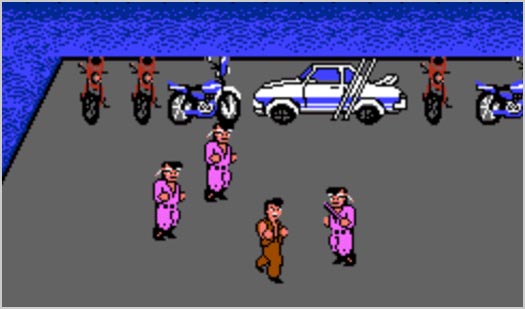 It's a shame that the developer has since vanished, as Technos games all had their trademark "look" to them in the same way as old Capcom and Konami games did. The character ("Kunio") featured in this game went on to star in several other lesser-known Technos games, more of a mutation of his original character than anything, but in such a way that it was always a knowing nod "yeah, we were here first." It seems a little strange that this "world" was eschewed in Double Dragon, which went on to become Technos' signature game - though that game has all the glory, Kunio was the source of the personality. 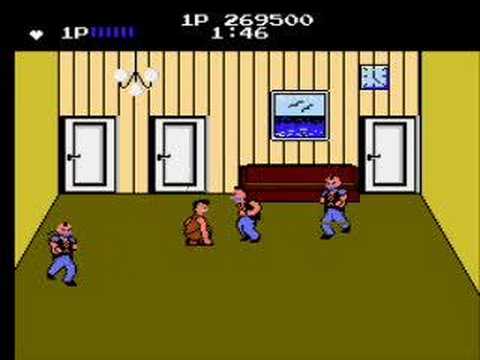 It is hard to look back at a simple-looking and simple playing game like Renegade and sit through a solid play session of it today, but it is a very important game in history and receives high marks for being so groundbreaking and novel when it released. This is an aged game, but certainly a classic.

Want to win ANY Free App of your choice for your iPhone, care of Headcase Games? (LINK)