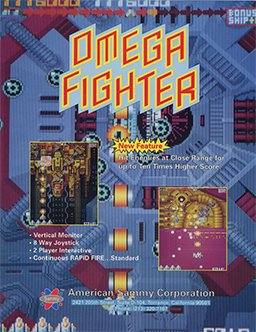 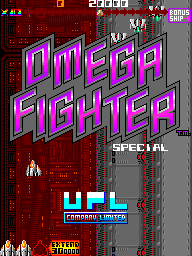 Yep, it is Space Shooter Saturday! Today we will take a look at a little-known game by a little-known developer, though they have made some fairly unusual and enjoyable titles (Atomic Robo-kid, Mutant Night, Gomola Speed) 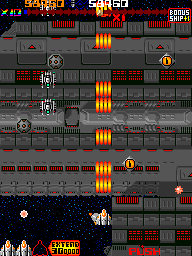 With that in mind, Omega Fighter should rightfully warrant a player's interest. A company whose catalog consists of so many strange games should yield a bizarre spin on the shooter category, correct?

The end result is alright. The game does a good job of putting the adept shooter player through his paces, but the game is not quite as bent and wacky as UPL fans might expect. That being said, there are some interesting elements here. The entire game pits you against an evil armada emanating from a singular (huge) vessel which serves as the game's backdrop, something I've not seen done before (and to a rather cool effect). The scoring system is likewise unique, in that you get higher points based on an enemy's proximity to you when it is destroyed. Scoring fills up a gauge, which rewards you with an extra life when it tops off.

At the end of the day this is "just another shooter," there is no fancy technology going on to wow the player; still, what is here is quite solid and engaging, and a shooter fan will have some good fun trying to blast through this title!