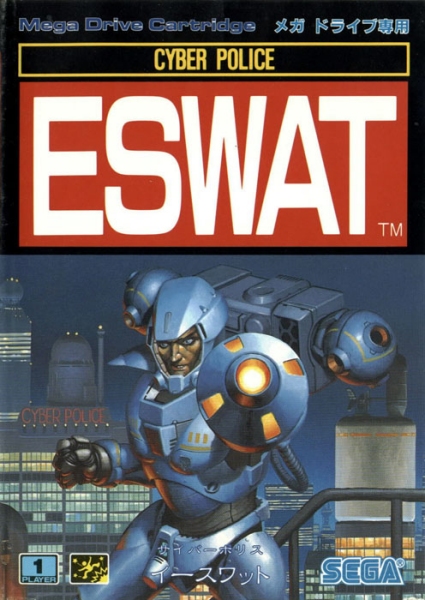 "What? But Ralpert, I believe you already covered ESWAT way back in July!" Hush child. That was the Sega Genesis console port, ESWAT: City Under Siege. This would be the original arcade version ESWAT Cyber Police, released in 1989. Really, oughtn't you expect better of me by now?

Who am I talking to, anyway? 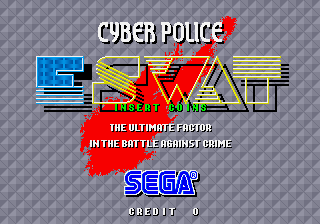 Alright! ESWAT was another in a long tradition of Sega's arcade action games, following very closely behind the likes of Shinobi and Shadow Dancer. Like those games, your job was to merely walk to the right and kill as many ruffians as possible without getting too hosed yourself. Sounds easy enough; it wasn't, this game was a bit rough! 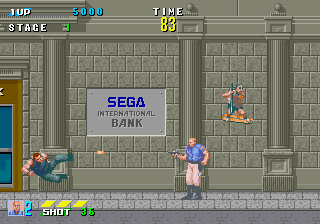 Rough, but enjoyable! You started the game out as a lowly police cadet, hell-bent on devouring the cancerous crime which has infested your otherwise fairly peaceful metropolis. This is no Narc, you aren't given the option of arresting anybody (though after you "kill" a boss you'll cuff him and drag him to the slammer) - it is all shoot, shoot, shoot. And you'd better, since everyone in town and their ma is gunning for you. 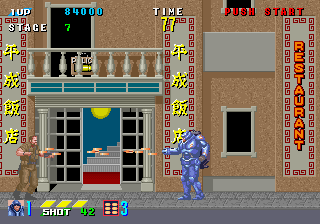 Pass the introductory missions as a "normal cop" and you'll earn the pedigree necessary to suit up in battle armor, which looks cool and feels empowering, kind of. You quickly realize that your so-called "armor" is likely made of papier-mâché and only a couple of bullets will bring you down. You get access to some (slightly) nicer weapons, but nothing that is terribly useful in the long run. Still, the suit "feels" cool and there was a general cultural fascination with All Things Robocop back when this released, so that was good enough of an excuse to feed this machine a few quarters. 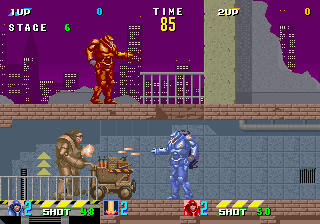 The game has some very nicely detailed levels, and some interesting foes to combat; garden-variety thugs are plentiful, but you also get crazy enemies like the occasional tiger and giant gorilla, and of course a fair amount of equally-powered cyberfiends clamoring to get a piece of you. It's all in a day's work. 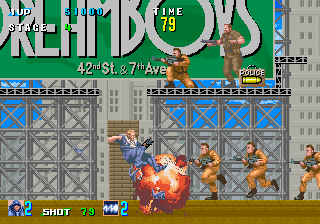 The game doesn't really hold up too wonderfully all these years later, though it is quite colorful and some of the music is alright (in that melancholy late-80s "Japanese Techno" midi-style which makes me quite nostalgic.. you know what I mean). ESWAT is long gone and forgotten, but I always really enjoyed these well-assembled Sega titles and the (completely different) Genesis port will always remain on my short list of favorite titles for that console. ESWAT may be frozen in the past, but that doesn't mean that "this crime scene is not worthy of investigation!" Ahem. I'm sorry...