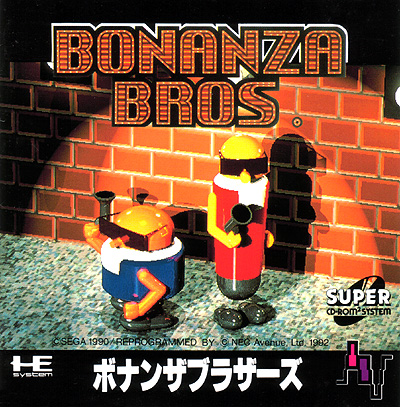 Bonanza Bros by Sega, released in the arcade in 1990 and ported to the usual bevy of systems shortly afterward.

Good old Sega, they never disappoint (well.....) During their heydey much as now, they'd always see fit to put out the usual stream of franchises, though with a fair helping of unusual IPs as well. Bonanza Bros was one of those "out of nowhere" titles that just appeared with little fanfare, though it was a solid game (if a little strangely designed).

This was basically a side-scrolling platformer, and it reminded me of a mix of a couple of different existing games for a few reasons: Taito's older side-view action title Elevator Action in which you must break into different buildings, loot them, and then make your escape; and Sega's own Crack Down, a split-screen two-player affair (somewhat reminiscent of Gauntlet, itself) with part of the screen showing an overall map of the full level, tasking both players with completing a mission and finding the exit before the timer runs out. 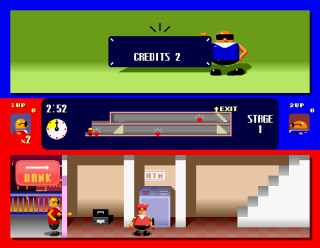 Of course, unlike either of those game, Bonanza Bros was much lighter in tone (using a distinctive "early-80s' 3D render style" which felt very cutesy-cartoony) and there was a good deal of slapstick featured. Derivative, sure, but BB was it's own thing, and stood out from the pack when it showed up. 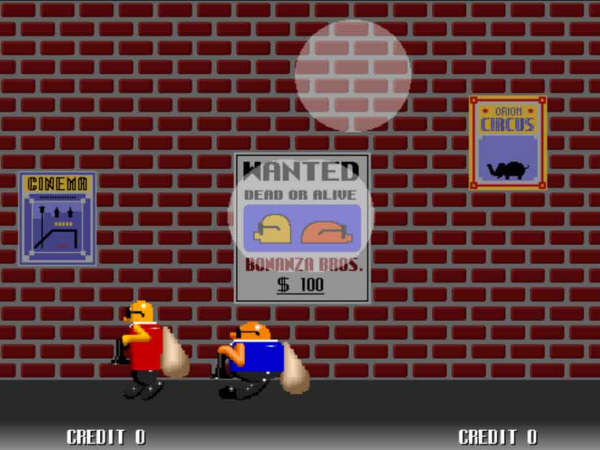 The game never left a very lasting impression; the home ports were probably a bit too cramped-looking for their own good, and the gameplay was criticized by the media for being rather flat, old-school, and bland; yet for what it's worth, the game was (and still is) a fun little title which is enjoyable with a friend, and stands as another example of Sega putting in the time and effort to craft a unique, interesting game which can stand on its own. The Genesis console version is probably the easiest to locate, and it is not a bad port; but for the deluxe experience, try to track down the TurboGrafx-16 CD-Rom version, the entire presentation is much punchier.

Help us vote to get our iPhone game 180 featured for FREE on freeAppCalender.com! Even if you voted yesterday, today's vote counts too so please - vote now to help us get some visibility for our excellent little iPhone game!