Retro Game of the Day! A Boy and His Blob 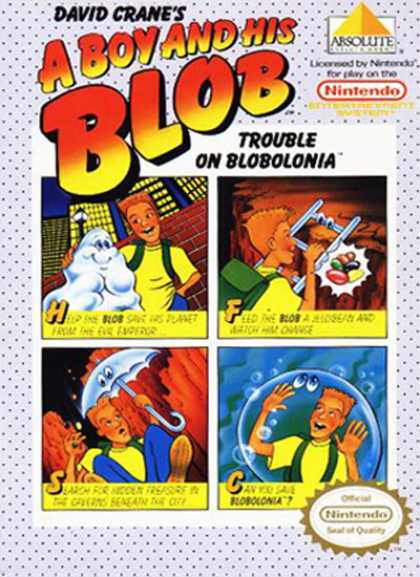 A Boy and His Blob by Absolute Entertainment, released on the NES in 1989.

There was quite a stir when this game was announced, as it was to be David Crane's first major contribution to the NES library. He was the original developer of Activision's Pitfall! cartridge several years earlier, which is regarded as one of the first games to introduce the platforming mechanic (paving the way for other popular games like Super Mario Bros.)

Blob was quite a strange premise for a game. It placed you in the role of a kid traveling through (and beneath) a lonely, nearly empty city, with several obstacles/puzzles to unravel. You were in search of hidden gems, which could be used to buy expensive vitamins. This was all critical to rescue the Blob's home planet. Hey, it's a videogame, it didn't have to make sense..

... so long as it was fun to play. This is where the controversy begins; Blob was absolutely an original idea, with a very interesting execution. Your boy would find and reserve several different flavors of jellybeans, and feed them to the blob. He'd then change shape into many different items depending on what he ate. Ladder, trampoline, portable hole, blowtorch (??) The notion of "make your own game" in this way was very exciting.

Unfortunately, there were some serious issues with the game. The amazing concept was built upon what felt like a very dated engine (seriously, though Pitfall! was an excellent game in its day, this game felt like it was barely a couple of steps past that). As there was a huge world to explore with lots of things to experiment with, it felt very cumbersome and tedious as compared to a more "accessible" and vivacious world in a game like Metroid.

A Boy and His Blob wasn't a bad idea, it's just the execution that didn't feel right. Something about the aesthetic was off-putting as well (the game looked neat and dreary at the same time) and this was one of those instances where, shallowly, the title and box-art really turned me off altogether. I rented the game, but never felt tempted to push far into its world. Still, a very unique idea which was considered very inspirational and novel.