SEARCH
A minimum of 3 characters are required to be typed in the search bar in order to perform a search.
Production
9 min read
article

The challenge facing all creative media businesses today is to establish a production system that balances creativity alongside productivity. I went looking for examples of systems that have delivered results. Here's what I found...
Colin Anderson
Blogger
June 16, 2009
Creative Assembly Lines

In the 19th and early 20th centuries, manufacturers had one very large and pressing problem:  how to make enough of their products to satisfy customer demand?
It was a real dilemma.  Until then most manufacturing had been bespoke, or the result of cottage industry.  However, a wealthier population and advancing technology meant there were new opportunities for manufacturers who could make things cheaply and in large numbers.
The solution they came up with was ‘assembly line’ production, as pioneered by Henry Ford at his Detroit automobile plant.  It solved the numbers problem so effectively that assembly line production is still used today - for manufacturing everything from marbles to jet airliners.  It shows no sign of being superseded anytime soon.
As a manufacturer, unless you’re making food, shelter or medicine, you’re building non-essential products.  As game developers we are creating entertainment – a worthy pursuit for sure - but hardly likely to trump the “big three” anytime soon.
This means we’re manufacturing items which consumers (gamers, listeners, viewers, etc.) might like, but which are not actually essential to them.  In contrast to food, shelter or medicine, they're unlikely to buy our products out of sheer necessity any time soon.  They're only going to consider buying them if they want them.  And that, in a nutshell, describes the problem facing every creative media business in the world right now: none of us know what we really want until we see it. This makes games - just like books, television, film and music – a hit driven industry.
Manufacturers of 21st century entertainment - such as computer game developers - face an altogether different challenge to their 20th century counterparts.  Duplication is no longer an issue.  A single copy of a product can be duplicated thousands or even millions of times and then distributed globally without so much as a single forklift truck bothering a pallet of anything.
So, since almost every form of media can now be reproduced and distributed digitally, the primary concern for creative media companies becomes even more focused on the quality of the product itself, rather than its route to market.  There's little advantage to be had from applying saturation levels of distribution and marketing to mediocre products any more.  Specifically, any entertainment company with a long-term vision must consider how to create "hits" consistently – repeatedly, and on an ongoing basis.
If Henry Ford’s Detroit automobile factory was the answer to the manufacturing problems of the 20th century, what might its 21st century equivalent look like: a “Creative Assembly Line”?
Can a company be consistently creative while still maintaining its productivity?  If so, how would a system capable of delivering “hits” repeatedly actually work?
After all, one without the other has no value.  Being creative is fine – but if you never release anything, you'll eventually run out of money and deprive the world of your genius.  Similarly, generating lots of products that offer the world nothing new is equally worthless.
The challenge facing all creative media businesses today is to establish a system that balances their creativity alongside productivity.  Since Denki was set up, we’ve been carefully defining our own system called (oddly enough),  “The Denki Difference”.  It’s still very much a work-in-progress at the moment, and is likely to remain so for as far ahead as I can see; but, in an endeavour to make sure we’re heading in the right direction, I went looking for examples of systems people have used to create a balance between these traditional opponents over the years.

The first system that caught my attention was the “Infinite Monkeys” approach.  Simply cram huge numbers of unskilled workers into a room, give them appropriate tools, and let them get on with it.  The theory goes that they’ll deliver a hit - sooner or later.  Probably.  Almost certainly.  One day...  OK, so nice theory - but perhaps not so good in practice.  For one thing, they’re still going to need paid regardless - and the amount of office space required could be staggering.  It's unlikely investors would line up to bankroll this approach.
So let’s refine this process a little.  Replace the unskilled workers with a finite number of highly skilled workers perhaps? This would work better, but it still has limitations.  It’s not that far from what most developers use today.
Demand delivery at a certain time and you’ll get something - but the quality can’t be guaranteed.  If you want that you still require an indefinite, and most likely large, amount of time – perhaps not as much as before, but definitely more than your backers are likely to tolerate.
But let's not forget - the underlying quality of the end product is absolutely fundamental to the viability of any entertainment businesses.  A half-baked product, ready on time is almost as worthless as having the best game ever hitting Beta just in time for the end of the world.
What we all need - not just in games, but across creative media - is a way to deliver the highest quality product; consistently, and within a commercially realistic timescale (and therefore budget).
I’m convinced it can be done, because it’s been done before.  From what I've learned it seems to come down to two factors – people and process.  I’m deliberately (and controversially for sure) omitting ideas from that list.
Denki is already a long way down the road to proving how this works in practice, but we’re still some way from drawing any meaningful conclusions about our success (or otherwise).  Our first two games to be built using this approach are underway, so I’ll be sure to write about the lessons from that once we have some tangible results.  In the meantime, let me point you towards the inspiration I used.
There are a few examples of companies who have delivered a variety of hits, consistently, over long periods.  The TV and music industries aren’t exactly bursting with them, but they do exist.  Companies such as HBO, Gerry Anderson Studios and even Stock Aitken Waterman all qualify.  Sadly though, they’re all less than perfect analogies for various reasons.  Either they focus on one specific area (puppets) or despite commercial success their music lacks long-term credibility (and offends the limits of good taste!)
What I went looking for were companies that sustained commercial success over a long period using different teams and entirely new concepts – not just more of the same – and yet still managed to create works of long-term artistic merit.  There are two absolute crackers: Motown Records and Pixar Animation Studios.
Both companies display similar attributes.  They have had multiple hits.  They're not only critically acclaimed, but enormously popular with audiences.  They both have multiple teams (or groups) working internally on new projects across a variety of 'styles'. 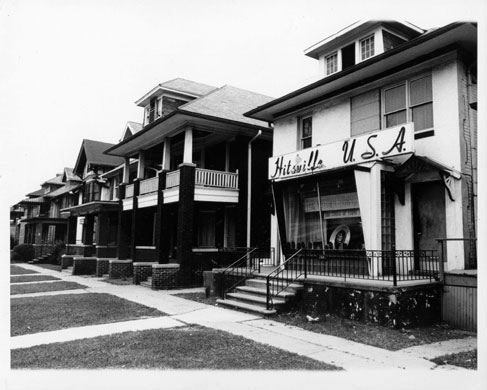 If you look at any history of Motown, one word which crops up time and time again is 'factory' - but not in any negative sense.  The whole business was run as a hits factory, pumping out record after record.  Yet, despite this relentless productivity they delivered over 110 top tens in a ten year period - that's almost one a month: for an entire decade!
Berry Gordy, Motown's founder, applied the same principle of quality to every aspect of the production process.  He used dedicated songwriters.  He brought in the best local musicians for recordings rather than the artists themselves.  He created ‘artist development’ to coach his young stars on how to act, behave and present themselves.
Better yet, he held regular weekly meetings to review all of the tracks being worked on and to assess them against the current top five.  Any song which he felt wasn’t up to scratch, or wouldn’t be received well in the charts, was sent back for more work.
Some of the company’s biggest hits, including ‘I Heard It Through The Grapevine’ were sent back several times to be reworked.  Many would say that takes serious courage; but the alternative - letting something half-baked through - is actually the more reckless decision in any entertainment company.

Pixar has been similarly successful.  Ten movies in just over a decade, grossing more than $2.5 billion, giving them the industry’s highest average.
Pixar’s website outlines their process for pitching, designing, producing and polishing a movie.  It echoes Motown’s process closely.  Quality control throughout, and the courage to send it back at any point if it’s not good enough.
Pixar’s approach highlights another key aspect of a successful ‘creative assembly line’: it’s not about the original idea - it’s all about the people and the process.  Ed Catmull, who’s now the president of Disney-Pixar, encapsulates it very neatly: "If you give a good idea to a mediocre team they will screw it up; if you give a mediocre idea to a great team they will either fix it or throw it away and come up with something that works."
For both Motown and Pixar, the important aspects were getting the right teams in place - then creating a process which ensured each and every product received the attention of experts.  If it didn’t meet expectations, it was sent back - as often as necessary.
This turns one of the basic assumptions of the games business on its head: that the idea is the key to success.  If these examples of creative factories prove anything to me it’s that the team determines the eventual quality of the product, not the idea.  How else can one explain why a film about a rat with culinary aspirations generates over $620m, or a film about a robot litter picker makes over $530m (and picks up an Academy Award!)
There are other examples out there from the television, movie and music sectors, but for me these two companies perfectly encapsulate the concept of ‘creative assembly lines’ and suggest the eventual form a solution to the challenges facing 21st century manufacturing may take.
So what about the games industry?  Who would you rate as a hit factory in the games world?  Nintendo's the most obvious example, but who else gets your vote?
---
Get daily news, dev blogs, and stories from Game Developer straight to your inbox
Subscribe