Grab your paints and brushes and download the brand new content pack with model suggestions from the community
Green Man Gaming Publishing
May 04, 2022
[This unedited press release is made available courtesy of Game Developer and its partnership with notable game PR-related resource Games Press]

London, UK- 4th May, 2022.  It’s time to grab your brushes and creative tools once again as Green Man Gaming Publishing and developers Moonlit S.A. have released a brand new variety model pack for the hit virtual hobby simulator Model Builder. This new pack is based on suggestions from the Model Builder community, and the best part is that it's entirely free for anyone who owns the base game!

Model Builder is the next generation of virtual hobby games that brings the joy of scale model building to enthusiasts and novices alike. Join the latest trend in simulation games with Model Builder and unleash your creativity by cutting out, assembling and painting your models including planes, tanks, figures, mechs and more. Sell your creations for profit to expand your toolkit, or display them to create stunning and epic scenes for the whole world to see. 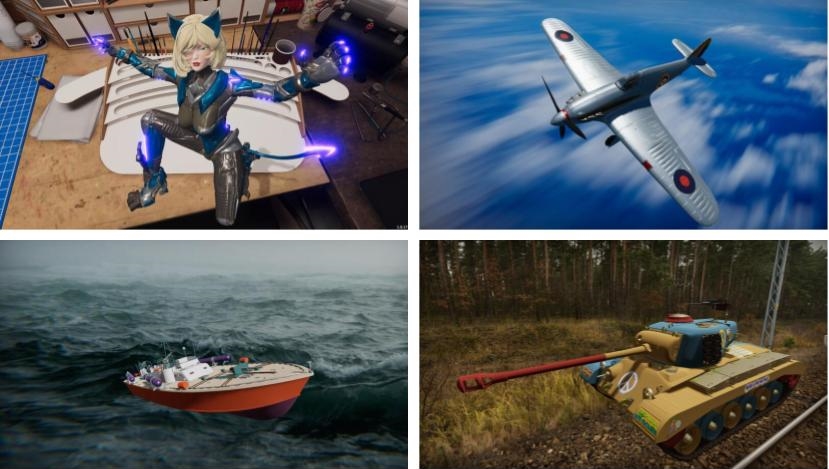 The new free variety pack download contains four exciting new models, built from the ground up with varied levels of difficulty. Here is what is included:

The American patrol boat PT-109 entered service in 1942. Its main purpose was to fight the Japanese fleet in the Pacific. PT series boats also helped to effectively stop enemy units during the Battle of Guadalcanal. A boat was manned by a crew of 12 to 17 men with a wide offensive arsenal at their disposal, such as 21-inch torpedoes, deep-sea bombs, and double-coupled CKMs. The PT-109 was also equipped with a 4500 hp gasoline engine. This enabled it to reach a speed of 41 knots with full equipment.

A British fighter aircraft that played a large role on the front lines of World War II. It was used by the British RAF from 1937 to 1944. These machines were equipped with an improved engine capable of accelerating to 529 km/h. During the Battle of Britain, Hurricanes were successfully deployed against German bombers. Later their design was improved further, and as a result Hurricane fighters were able to compete with German Messerschmitts.

They say the scientists were so focused on asking “if they could”, that they never considered “if they should”. And so, here we are. In a world overrun with aliens called ONI, our only hope is… the Astrocat Girls – the newest generation of semi-sentient android pilots! It’s no easy task to pilot a Gunbot, but the brave Astrocat Girls are up for any dangerous mission if it means the world could be saved.

An American heavy tank used during World War II and the Korean War. Armed with a 90 mm cannon, it was intended as an equivalent to the German Tigers and Panthers. It featured a Ford engine with 507 hp. At a relatively light weight of 41 tons, this engine provided a speed of 40 km/h. The 5-man crew was shielded by 115 mm armor, and the tank’s combat range was 160 km.

This is the third free content drop from the Moonlit S.A development team after the first  ‘updates and quality of life improvement’ download followed the extremely well received Frostpunk DLC released in March. These free content packs highlight their ongoing commitment to Model Builder’s community and to the future success and growth of the game.

We are an independent game-dev studio with a software house pedigree to create complete and timeless games. We have been developing projects and technologies for major companies in Poland and abroad for over ten years.

Our technologies, such as Angular Light and Ultimate Water System, won prizes on GameINN 2017 and GameINN 2020. We are currently focusing on our release plan, including two high-quality productions: Model Builder and Dog Trainer.