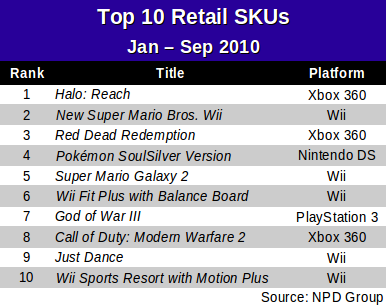 As referenced above, you can compare to the same list from the first quarter of 2010, originally published by Gamasutra in May of this year. 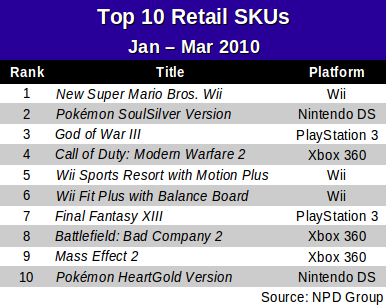 As for September itself, as expected, Microsoft's Halo: Reach was the best-selling game in September 2010, with sales of 3.29 million units. This compares favorably with the launch of Halo 3: ODST a year prior, which moved 1.52 million units. In terms of reaching out to a larger base of players, however, we would note that when Halo 3 originally launched back in September 2007 it also moved 3.3 million units, and on an installed hardware base about one third the size of the current Xbox 360 base. If Microsoft has enlarged its base of core Halo fans, the initial sales figures for Halo: Reach don't demonstrate that. To put it in percentages, Halo: Reach was bought by 15% of the Xbox 360 installed base at launch, while Halo 3 was bought by 49%. (For completeness, ODST was bought by 9% of the installed base at its launch.) That said, Halo 3 went on to 4.8 million sales by the end of 2007, and there appears to be an opportunity for the same to happen with Reach in 2010. That is, we expect that consumers will find the new Xbox 360 S model an attractive device this holiday, and that those consumers will pick a popular game, like Halo: Reach, to accompany their new system. So while Microsoft will no doubt be pushing Kinect, Halo: Reach will also be a top-seller alongside those new console purchases. We would not be surprised to see Halo: Reach top 5 million in sales by the end of 2010. The other titles in the top 10 chart released by the NPD Group are listed below. (At this time the NPD Group is not releasing a top 20.) 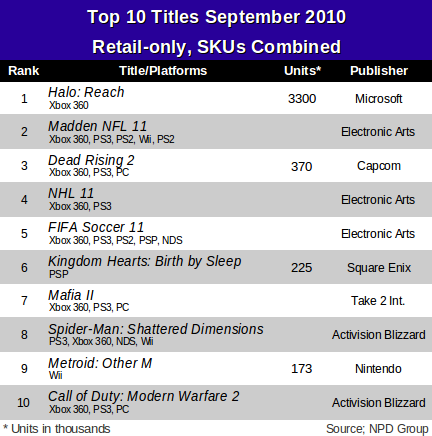 We wish to dwell briefly upon two additional single-platform titles which made the chart. In what is probably the last hurrah for the all-but-abandoned PlayStation Portable (PSP), Square Enix's Kingdom Hearts: Birth by Sleep sold an impressive 225,000 units. Unlike some other high-profile PSP releases this year, Birth by Sleep was not sold through Sony's online PlayStation Store. Even with a top 10 title, PSP hardware sales were down 44% from last year, according to Wedbush's Pachter. There are still titles planned for the PSP, including Sony's own God of War: Ghost of Sparta launching in November with a special edition of the PSP system itself, but we agree with Pachter's assessment that there appears little that Sony can do with the system. The launch of the 3DS by Nintendo in five or six months makes Sony's handheld future even more difficult. The second title we'd like to single out is Nintendo's Metroid: Other M, developed in conjunction with Team Ninja. Having moved only 173,000 units, the title serves to highlight the ongoing challenges in the Wii market, even for Nintendo itself. Even a first-party title with a well-known property on the current generation with the largest installed base may not set the market on fire. With several other high-profile Wii releases coming out soon (Donkey Kong Country Returns, Kirby's Epic Yarn, and Activision Blizzard's Goldeneye, to name a few) we feel confident that their sales will again drive many interesting, and heated, discussions.
Console
Get daily news, dev blogs, and stories from Game Developer straight to your inbox
Subscribe