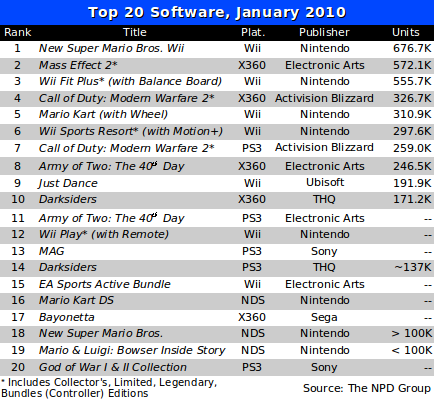 Much has been made of the long, broad appeal of Nintendo's software, but it is difficult to grasp the timescales involved when the charts are viewed a single month at a time. Consider graphical representation of the appearance in the top 20 all-format chart of several key Nintendo titles. 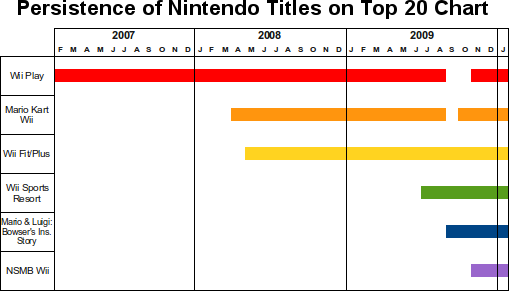 Given these precedents, it seems likely that New Super Mario Bros. Wii will follow in the footsteps of its handheld predecessor. Under those circumstances, we expect it to be a top 10 software title at the end of 2010. As new Wii systems are added to the installed hardware base, it appears they are continuing to choose these Nintendo standards as part of their software library. Other than the end of the Wii's run as the dominant console platform (at least in terms of sales), it's hard to come up with a convincing reason for these standards to fall off the sales charts. From a purely economic point of view, these titles present an impediment to at least some third-party software sales. If each new Wii owner is going to buy one or more of the standard first-party games (and this seems likely the case), then those owners will likely also have less money to spend on third-party games, at least at that time. Then one key for third-parties is to be ready for when that consumer returns for a new game at some point later. Getting the consumer's attention in the crowded Wii software market requires not only an easily understood premise (see Just Dance), but probably also brand-recognition (LEGO Star Wars has done well) and at least some promotion (as Nintendo itself did with Professor Layton). Nintendo's own software success is simply part of the playing field when courting the Wii consumer.
Get daily news, dev blogs, and stories from Game Developer straight to your inbox
Subscribe